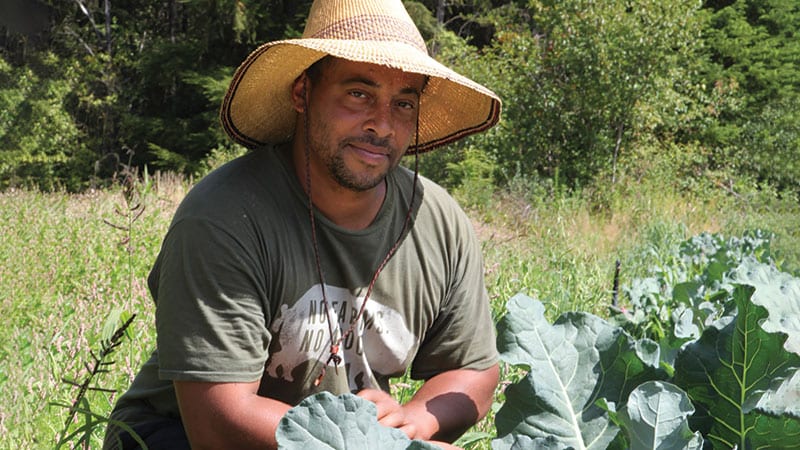 Sky Island Farm lies tucked into the rugged logging hills of Grays Harbor County, on the west coast of Washington state. The farm itself looks carved from the woods and rocky soil. On a late summer day, rows of purple cabbage and swaths of brilliant green arugula sprouts gleam in the bright sunlight. Nearby, a 100-foot greenhouse—hand built from rough-hewn pine trees felled on the land—bursts with sweet, gem-colored tomatoes. This is all the work of Bil Thorn and Kate Harwell, who have been farming here with their children for the past six years.

As lush and eye-catching as the fields are, it is the story behind Sky Island that sets these crops apart. As a Black-owned farm, built with determination and against significant odds (less than 1% of American farmland is Black-owned), Harwell and Thorn are cultivating new ground. Sky Island is not the first farm Thorn and Harwell have built from scratch. The couple started homesteading in rural Shasta County, in Northern California—Thorn comes from a family of gardeners and Harwell has a background with livestock. There they grew a large garden and orchard, raised goats, sheep, chickens and ducks, all off-grid at the end of a 20-mile dirt road. Thorn ran a small irrigation repair business on the side, but most needs they filled off the land. The name Sky Island comes from those days, when the clouds filled the valley around their hilltop plot and made the farm feel like an island unto itself. “You reveal precisely what is important in life,” Thorn says about the simplicity of that time.

One of the vitally important things, however, is water, and after four years of homesteading, the spring-fed pond on their land dried up, as the impact of climate change and succeeding years of drought made their mark. Thorn and Hartwell began looking to move north, eventually ending up near Humptulips, on the current iteration of Sky Island Farm.

“We were looking for a minimum of 10 acres,” explains Thorn, “with some sort of water and some sort of dwelling,” as the family had been living in a canvas-walled tent cabin in California. The property they eventually found was 15 acres, with a house and a shop. “It was in terrible, terrible shape,” he says. “There were holes in the walls, the doors were hanging off their hinges, there was no electrical, and trash everywhere.” It took the family five years to clean it all up. For much of that time, Thorn was driving to Seattle, to work as a landscaper and arborist to help support the farm.

Even here, further north and in a much rainier climate, water has continued to be an issue. The 23-foot well on the new property went dry and Thorn had to dig a deeper, 80-foot well. “I can tell the water table is dropping here, too,” he says, “I can see it in the conditions of our trees.”

Yet Thorn and his family have gotten to work—clearing trees, sorting out rocks, and coaxing brilliantly colored vegetables out of the soil. Their fields are now filled with magenta-skinned carrots, white Japanese cucumbers, purple cauliflower, and tomatoes streaked in green, gold and red. “I landscaped for a long time,” Thorn explains about the vibrant produce, “and we were ornamentals freaks; we just like pretty things.”

These days, those pretty vegetables are being distributed around the mid-coast and South Sound area through the Sky Island community supported agriculture (CSA) program, which provides a weekly produce delivery. “We were going to downsize our CSA and focus on wholesale this year,” Thorn says. Sky Island was poised to sell produce to Seattle Public Schools—which aligns with their mission of providing nutritious food to children. Then, the pandemic hit.

With schools closed and the future of restaurants uncertain, Harwell and Thorn focused on the CSA program they already had in place. They were almost fully subscribed, at 70 members, but they expanded to accept 150. “The interest is massive,” he says. “We have a huge waiting list—we could have done 250.” CSA farming is harder than growing for wholesale accounts, however, as you have to grow a wider diversity of crops to keep a weekly produce box full and interesting.

This pandemic-inspired interest in local farm produce has been a boon to this fairly new farm still getting established. Thorn and Harwell had been working 12 to 14-hour days, seven days a week, with their teen children helping on weekends. “By the end of last season,” says Thorn, “we were really trashed.” But the CSA signups allowed them to purchase tools and put in some irrigation to help water the crops. “We’re already seeing the impact, big time,” Thorn explains. “Our work days are not as long.”

Then, in late spring, their relationship with the community changed in other unexpected ways.

In the wake of the killing of George Floyd in Minneapolis in May, as the impact of racism in America was laid bare, interest in supporting Black businesses surged. On the farm’s Instagram account, Thorn began speaking openly about supporting Black agriculture. “This is coming from my own experience as a Black Farmer,” he wrote. “All my neighbors have tractors except me and [they] don’t ever offer to help…So if you have the tools, reach out and see what project you might be able to lend a hand with…In a lot of cases this is better than money.”

In this case, help and money both came. Donations mounted in the farm’s online accounts and a Go Fund Me account was set up to fund the purchase of a tractor, a produce wash station and a commercial kitchen. By late June, Thorn was able to order a Kubota tractor that will significantly reduce the amount of backbreaking labor required to maintain and expand the farm’s growing program. “This is a total game changer!” he wrote, thanking the Instagram followers who had donated to the fundraiser.

“It’s absurd what you have to invest in a farm to make any money,” he explains, pointing to a series of silage tarps being used as weed suppression on a new field. “Just one of those is $400.”

While costs may be equal for all new farmers, Black farmers are, in general, additionally challenged by a lack of intergenerational wealth, increased difficulty in accessing land and inequitable lending practices (see Sound Consumer,
“‘Farming While Black’ Author Reclaims History and Builds a Better Future”). Thorn and Hartwell had been able to sidestep some of these challenges by arranging for owner-carried loans—where a seller who owns land outright agrees to carry the loan for the buyer (similar in function to rent-to-own). “We had to get creative,” says Thorn. “We didn’t have any money, so we had to think outside the box.” Their first property in California was an owner-carried loan, the Humptulips property had been foreclosed on.

Determination and creativity cannot solve all the challenges faced as a Black farmer, however. “There have been times when I’ve talked to restaurants who were interested in buying our produce,” Thorn explains, “but then they realize I’m Black and they change their mind.” He shrugs. “They end up paying more to a White farmer for less good produce.”

Thorn refuses to allow these experiences to negatively impact him. “I refuse to let it control my life—my drive, my will to succeed. I saw that with my dad and I can’t do it.” Thorn does seek out other people of color to work with—restaurant owners and Black chefs. Social media has been a good way to connect. “Before we got on social media, I didn’t even know there were other Black farmers in Washington,” he says. Now he and Harwell are able to connect with other food professionals and help mentor aspiring Black farmers.

Going forward, Harwell and Thorn are excited about new business opportunities. “I would definitely like to wholesale more,” he explains. “I’d like to work with the schools. I think the key to get people to eat healthier is to eat different things when they’re young.” Whenever school groups ask to visit the farm, they are warmly welcomed.

The funds raised for a commercial kitchen will help them cook with visiting school children; longer-term plans include a series of tent cabins tucked into the woods to host overnight groups.

Thorn is also excited by a collaboration with Grays Harbor Community Hospital, which provides home-based hospital patients with CSA boxes, in an innovative, produce-based prescription for increased health (see Sound Consumer, “Food ‘Farmacies’ Build Nutrition into Healthcare”). “It’s a lot of work,” says Thorn, of the farm, CSA delivery program, wholesale accounts, and selling at the Aberdeen and Seabrook weekend markets. “But it’s good knowing we are getting nutritious food to so many people.”

No matter what may come next, Thorn and Harwell are prepared to keep building—both farm and community.

“If you want anything bad enough and you put your mind to it, you can probably get it,” Thorn explains. “You just have to stay on it. Most people give up. I don’t give up.”

PCC at the holidays