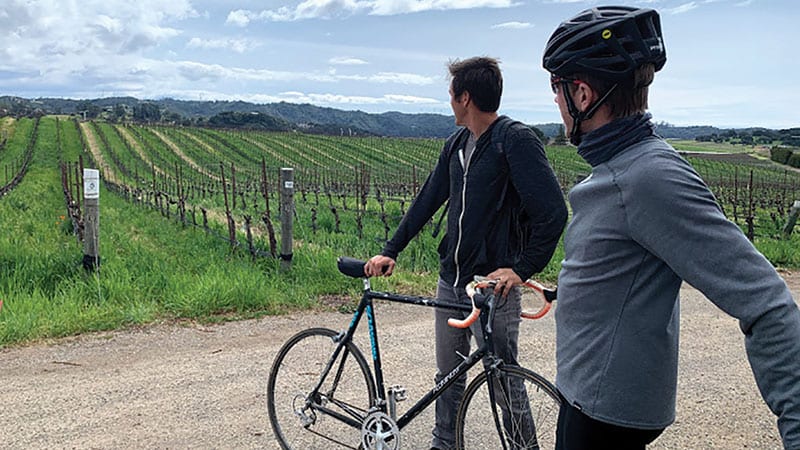 I biked to work. I ate a plant-based diet. I opted out of AC and swapped all my light bulbs for LEDs. I was happy enough with my low-impact life.

And then I picked up a book—”Children of the Sun” by environmental historian Alfred W. Crosby—and read this: “An American gallon of gasoline corresponds to about 90 tons of plant matter…We are living off a bequest of fossil fuel from epochs before there were humans and even before there were dinosaurs.”

Suddenly my limited use of fossil fuels seemed excessive and thoughtless. Driving my car for 30 minutes used the same amount of energy contained in “40 acres of wheat—seeds, roots, stalks and all,” and released nearly 20 pounds of CO2 into the atmosphere.

With this awareness came a new responsibility to burn fossil fuels minimally and thoughtfully. My impact on the planet became a factor, like my bank account balance, when deciding how I’d spend each day. So I decided to build a budget—a carbon budget.

According to a handful of online carbon calculators, my daily carbon footprint was already well within the budgeted personal tons per capita of CO2 to meet global emissions goals. I had opportunity for improvement not with small changes but with bigger, less frequent events—like a wedding or vacation—that produced the bulk of my emissions.

I started small with our wedding, working off more of a carbon mantra than a budget. We made the food ourselves, used only compostable dishware, hosted people in our own home, and asked that they bring no gifts. We didn’t hire a photographer, or caterers, or a DJ. The biggest impact of all was limiting the number of people attending—travel to and from the event would contribute most to the event’s footprint. We capped our guest list at 50 people. Even so, we learned through an online carbon calculator, offsetting the emissions for their travel totaled close to 18,000 pounds of CO2—or 9 tons—which is about my and my husband’s annual personal footprint combined.

Our upcoming vacation to California provided a more comprehensive assessment. The goal was not only to make a carbon-intensive vacation less carbon intensive, but to rethink vacation entirely. How could we put the planet first while getting some much needed time away?

I started with carbon dioxide emissions coefficients provided by the U.S. Energy Information Administration—the amount of CO2 emitted per gallon of fuel. Then I set out to determine just how much fuel each mode of travel—car, plane, and train—would require to get us from Seattle to the Bay Area.

This was easy enough for the car and the plane, but trains are apparently very complicated things. A train’s MPG depends on variables like the type of locomotive and the number and type of cars it’s pulling. Our own piece of the pie would depend on ridership, which is difficult to estimate when people get on and off at various stops during a 23-hour journey.

The information accessible to an amateur like me was incomplete at best. When I needed to translate the fuel economy of our specific locomotive from “an engine output of 3,170 kW at 1,047 rpm, or 2,650 kW when running in HEP mode with a 0 kW HEP load” to “X miles per gallon when pulling 9 coaches,” I almost threw in the towel. Even when I wrangled an estimate, it didn’t match up with anything else I found online. I was either doing the math wrong, or I was missing key information.

In order to make fair comparisons and build our budget in a reasonable amount of time, I scrapped my math and used this chart of average fuel economy by mode of travel from the Department of Energy. It wouldn’t factor the details of our specific trip, but it was the next best thing.

For our long haul to the Bay Area, we had three options:

According to the DOE’s chart, intercity trains in the U.S. are about 10% more efficient than planes per mile. But because the train would have to travel more miles than the plane, its total emissions were much higher than we anticipated. We didn’t expect Japanese bullet-train efficiency from Amtrak, but learning just how marginally the train would reduce our footprint felt like a sucker punch. The price of the plane tickets was just salt in the wound.

To be fair, the U.S. hasn’t really given trains a chance. We’ve prioritized highways over high-speed rail, despite examples of robust, efficient and affordable rail systems around the world. Systems in Europe and Asia not only emit less carbon, but also boast much higher ridership. In this case, our decision to take the train was a decision to invest in a better system.

Admittedly, it was also a matter of convenience. We wanted to bring our bikes—a means for both free recreation and carbon-free transportation—and trains were far more bike-friendly.

We would spend our first few nights with family just north of the Bay, avoiding hotel rooms, recreating right from the front door, and cooking all of our own meals, reducing our financial and carbon budgets simultaneously. Then we would hop back on the Coast Starlight and ride to San Luis Obispo, one of our favorite places in California. This time, the train would cost $130—half of what it would cost to fly there. Ha!

For five days it would just be us and our bikes. Around town, out to dinner, to the coast, through the hills. We would further mitigate our impact by camping on the way and shopping at the farmers market. Driving the same mileage in a car would send at least 100 more pounds of CO2 into the atmosphere—plus, if we had the convenience of a car at our disposal, we’d likely tack on more miles and grow our footprint even more.

For our last day in SLO, we planned a wine tasting bike tour with a good friend who farmed stone fruit near Fresno. It was a priority of ours to stay with him and help out on the farm for a few days. Unfortunately, no bike route through the Central Valley came highly recommended. We browsed buses, but weren’t able to confirm whether we’d be able to stow our bikes. We decided to play it safe and catch a ride to our friend’s farm in his truck, which would emit 150 pounds of CO2. On the bright side, the days we spent on the farm would be very low impact.

While our second attempt at carbon budgeting was more successful than the first, I was still disappointed by the lack of insight we were able to achieve. The practice helped me better understand the depth, complexity, and inequity of the hold that fossil fuels have on our lives.

Carbon budgeting also led us on a much different kind of trip than we had ever taken before. It was definitely slower. But by slowing down, we could more fully experience each place we visited. Instead of sitting in airports or in traffic—our two least favorite places to be—we spent our travel time playing games and dining with fellow passengers while enjoying an up-close and ever-changing backdrop of the places we passed through.

An hour spent cycling through vineyards and citrus orchards and vegetable farms brimming with spring activity became as much of a “destination” as anything.

Carbon budgeting is a term used often to talk about our efforts as a global community to minimize the impact of global warming, i.e., “We can only ‘afford’ to emit X tons of carbon each year for X years.” Huge, global actions are required to keep us within our global carbon budget. So when you scale this down to a personal level, it can’t just be about saving the world. Instead, it can also be about the personal benefits of taking responsibility for our impact. It’s about making what’s good for the planet good for us, too.

Building Your Own Carbon Budget

Whether you build your first carbon budget for a specific event or for a period of time, here are some things to keep in mind:

1. Start with the big picture. Online tools are a great way to capture an overview of your annual footprint so you can identify your biggest contributors, since these can be different for everyone. Calculators vary between quick-and-easy to comprehensive and detailed. Here are some to try and compare: EPA, Carbon Footprint, Resurgence, CarboTax, Terrapass.

2. Consider offsets. If you’re interested in purchasing carbon offsets for the emissions you just can’t shake, find resources at green-e.org.

3. Be kind to yourself. Reducing your personal footprint is complicated. Whether you calculate the emissions of Christmas vacation or quantify the impact of your grocery haul, there will always be something to improve on.