The quest to eliminate conventional starts from organic strawberry production 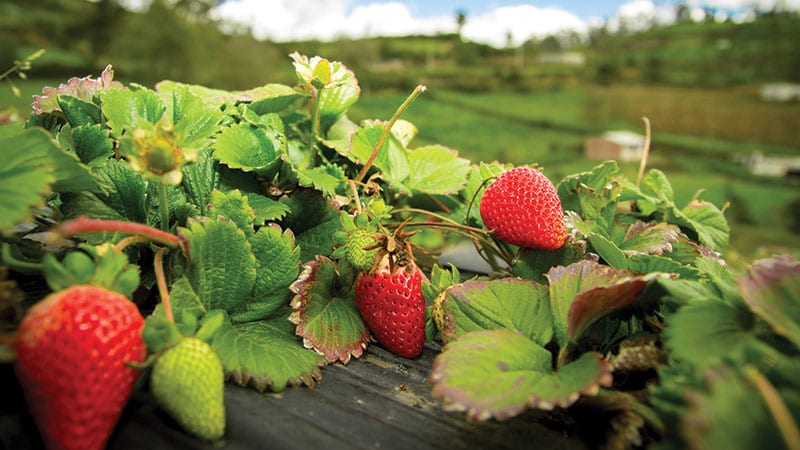 Surprising as it may seem, virtually all organic strawberries grown in the U.S. come from non-organic plants. Even though their land and farming practices are certified organic, organic strawberry farmers have used conventional starts, raised in nurseries and grown in soils fumigated with toxic pesticides, because they have no other choice. Strawberry nurseries across the country do not produce organic starts and they have little incentive to do so.

But change is on the horizon.

After the launch of the Organic Strawberry Fields Forever (OSFF) project in 2013, things began to shift. As the organic policy director at the nonprofit, Center for Food Safety (CFS), I created OSFF to help catalyze organic nursery production and start the conversation within the industry about the need to transition to organic starts. Seven years into the project, California farmers have planted in excess of 1 million organic starts. And, field trials have demonstrated that organic starts perform as well as their conventional counterparts. With increasing interest from consumers, farmers and nurseries, the organic strawberry industry will inevitably become organic—from the start.

The lack of organic starts has put organic strawberry growers in the difficult position of being forced to farm with conventional starts. This practice has been permitted under the “commercial availability clause” of National Organic Program’s (NOP) organic regulations, which made allowances for the fact that there were no organic starts when the regulations were written two decades ago. The clause was intended to support the gradual development of organic nurseries as organic strawberry markets grew. That has not happened. Since the regulations do not mandate a deadline for eliminating conventional starts, no market forces or government incentives exist to stimulate organic strawberry starts production.

In California alone, which produces 88% of the nation’s strawberries, approximately 80 million organic starts are needed to supply the state’s organic strawberry farmers. Public varieties that are available to all farmers and used in OSSF’s field research comprise an estimated 36 million of the state’s total organic starts market. Proprietary varieties, grown by private companies for their name brand berries, make up the rest.

Once organic starts become the norm for organic strawberry growers across California, approximately 1.3 million pounds annually of the most noxious pesticides will no longer be released into the environment.

Taking on the challenge

As organic policy director for CFS, my role was to identify ways to improve the integrity of organic production systems and enhance consumer confidence in the organic label. I created OSFF to stimulate the supply and demand for organic starts so that organic farmers could wean themselves off conventional starts. Beginning with a day-long Organic Strawberry Summit in 2013, I organized a series of stakeholder meetings over six years featuring speakers who explored what it would take to make this transition. A significant outcome was the decision by two nurseries to grow organic starts and capitalize on the untapped market.

During this same time, the California Department of Pesticide Regulation (DPR) faced the difficult challenge of finding a safe substitute for methyl bromide—the notorious ozone-depleting soil fumigant that has caused 5-10% of the world’s ozone depletion. Although methyl bromide was banned internationally under the Montreal Protocol in 2005, DPR continued to receive “critical use exemptions” until 2017, largely for the state’s strawberry farmers and nurseries. By using conventional starts, organic strawberry farmers were contributing to the demand for methyl bromide. But if nurseries began producing organic starts, it would decrease the need for critical use exemptions and provide a viable alternative that could benefit organic and conventional growers.

In 2015 Greenheart Nursery announced that it planned to produce 7,000 organic starts for OSFF to test in farm fields. In partnership with the soil input company, Farm Fuel Inc. (FFI), we conducted a field trial to determine whether organic propagation systems could provide organic growers with high-quality starts comparable to conventional plants.

Research was conducted on six organic farms in Santa Cruz and Monterey counties. Organic plants performed as well as the conventional plants in this initial trial. But the nursery decided that startup costs for this propagation method were too costly and terminated production.

That same year, Driscoll’s, the world’s largest producer of proprietary organic strawberries, announced that it planned to exclusively supply its contract growers with organic starts. Driscoll’s credited OSFF for providing the impetus for the company to go completely organic.

With such a large producer on board, the stakes were now even higher to develop organic starts for those growing public varieties.

Unfortunately, OSFF had no supplier. Luckily, I knew someone who regularly attended our meetings and might be up for the challenge. James Rickert, who grew organic strawberry starts in the 1990s for a short while, had expressed interest in restarting his nursery once the industry was ready. With the urging and support from OSFF and organic farmers, Rickert founded Innovative Organic Nursery (ION) in 2016 with Dan Nelson of the strawberry research company, Plant Sciences.

By this time, I had co-founded the public interest consulting firm, Organic Advocacy, and OSFF became one of our signature initiatives to enhance organic integrity and strengthen the resiliency of small, medium and family farmers. Once ION was up and running, I again partnered with FFI in 2018 to conduct a field trial, comparing ION’s organic starts with conventional starts. Funded by a grant from the Organic Farming Research Foundation (OFRF), we established five field sites in collaboration with organic farms on California’s Central Coast during the growing season, November to September. At each field site we measured plant growth, disease occurrence and harvestable and non-harvestable yields.

Our research conclusively demonstrated that organic starts performed equally if not better than conventional starts at each field site. We found no significant disease occurrence in any of the fields where either organic or conventional starts were grown. Data compiled from this field trial is intended to provide organic strawberry growers with the confidence they need to transition their farms away from conventional transplants. Additionally, with the backing of California Certified Organic Farmers (CCOF), organic strawberry farmers in the state will be legally required to grow organic transplants and fully transition to organic as the supply increases to meet the demand. We have already seen heightened interest in the production of organic strawberry starts from nurseries in California and elsewhere as a result of our work.

However, strawberry starts developed for specific regions and climates will not necessarily thrive in other places. Currently, no nurseries in Washington produce organic starts bred for Washington’s growers and that is why the organic strawberries sold at PCC Community Markets come from conventional starts. But that could soon change. Given California farmers’ success in growing strawberries from organic starts, at least some Washington farmers hope to follow suit. Rents Due Ranch, a PCC supplier and one of the only farms in Washington with enough organic strawberries to keep PCC shelves stocked, is eager to investigate whether ION or other nurseries can meet their organic needs.

Washington’s strawberry farmers will undoubtedly face different challenges than California farmers when exploring the transition to organic starts. For example, the Northwest has a much shorter growing season for most strawberries, lasting just a month or so. And, Washington has much more rain during the growing season. Yet, with new evidence and opportunities available to nurseries and organic farmers, consumers can anticipate expanded harvests of organic strawberries—from start to finish.