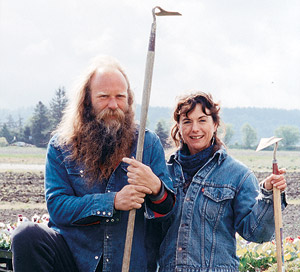 (April 2006) — It’s fair to say that PCC wouldn’t be what we are today without the produce grown by Mike Shriver, JoanE McIntyre and their family at the Rent’s Due Ranch in Stanwood. They’ve played an integral role in the success and growth of our co-op and indeed, played an integral part in keeping members and other shoppers well-fed and healthy.

That’s a lot of planting, hoeing, weeding and harvesting — through storms and foul weather, enduring discomfort and sometimes danger.

Rent’s Due Ranch grew out of an idea back in 1980 when Mike and JoanE decided to start growing their own produce for the family. Mike always had been interested in farming and years of working on other farms and educating himself independently provided the requisite knowledge.

As first-generation farmers, he and JoanE started with less than an acre but their perseverance, compulsive habits and strong backs led to a surplus of produce. Three years later the farm went commercial and before long, their surplus became PCC’s good fortune.

By 1990, PCC’s produce coordinator at View Ridge, Win Poage, began selling lettuce from Rent’s Due and soon PCC committed to purchasing the farm’s produce to supply all five PCC stores at the time.

PCC’s produce merchandiser, Joe Hardiman, laughs, “Tom Douglas, the award-winning Seattle chef, told me he’d never forgive us for stealing Rent’s Due away from the restaurant circuit — the farm couldn’t supply both and their produce was unequalled.” Hardiman says, “Mike is a magician, a genius for what he can conjure out of the ground. We couldn’t replace the quality of what he offers.”

The relationship enabled Mike and JoanE to expand the farm. Today, Rent’s Due Ranch is a 45-acre spread. Mike and JoanE start their crops from seed in nine greenhouses because that produces the most viable, healthy plants and they know exactly what they’re planting. This farm is certified organic, all the way.

The family also has grown to include four children — Michoan, Dillon, Ariel and Dusty. Then, just before Christmas 2005, Mike was diagnosed with arterial blockage. He has Aortic Valve Disease, something he was born with. Most people have three aortic valves; Mike was born with two. Over the years the two values have been very overworked causing build-up within the valves.

A few days before Christmas, a five-hour surgical procedure replaced one of the valves in Mike’s heart. The procedure was called an Aortic Valve Replacement, and it gave Mike a mechanical valve. He’ll be on a blood thinner for the rest of his life.

Like virtually all family farmers, Mike and JoanE have no health insurance. There’s no affordable way farmers can get insurance unless someone works off the farm in an outside job.

Until this happened, Mike always was healthy and active. Even now he’s impressing doctors with the speed of his recovery! Part of that could be his stubborn perseverance, but maybe it’s the love of the land, the feel of the seasons year after year, and producing beautiful, delicious food. The harsh part is that the bill for Mike’s medical care is likely to total $200,000 or more.

It’s not unusual to hear heart-breaking stories about farmers who are forced to sell their farms to pay for medical bills. Mike and JoanE have no plans or any intention of doing that. But they could use a little help from friends, like those of us at PCC. That’s where each of us come in.

There is a fund at Washington Mutual established to accept contributions toward paying off the medical bill due. If you wish to give back to these wonderful people who have provided for us over so many years, go to any Washington Mutual branch and say you’d like to contribute to the fund for Mike Shriver and JoanE McIntyre. The fund is in their personal names.

PCC’s management has pledged to continue helping this family and ranch, and we’re hoping you, too, can help us keep this relationship growing.