Nuts to that?! Flaws revealed in how we count calories 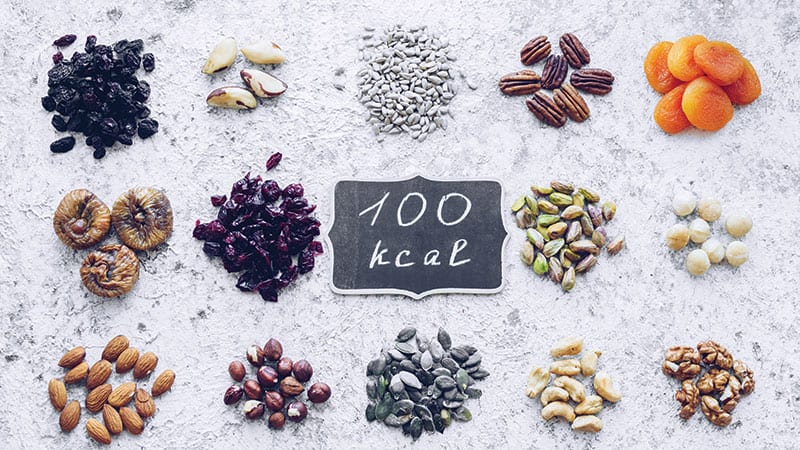 Kind Snacks recently announced it was reducing the number of calories listed on the back of almost all of its bars. As people who pay attention to nutrients, our first reaction was, that seems like good news. Our second was, wait, can they do that?

The makeup of the bars wasn’t changing. And calories are a scientific measure—something to do with heat and energy, right? But sure enough, Kind pointed to a recent body of research by the U.S. Department of Agriculture (USDA) that backs their decision.

Scientists at the agency’s Agricultural Research Service have conducted a series of experiments showing that almonds, cashews, pistachios and walnuts don’t provide as many calories as we once thought. Depending on the nut and how it’s consumed, they’re between 5% and 32% lower than what you see on many labels. The research carries implications for other foods, too. As it turns out, the way we’ve been tracking calories is not only rooted in 19th-century science, it’s got some fundamental flaws.

Calories can be measured in several ways. One method involves a device called a bomb calorimeter. Put a food inside the calorimeter and light it on fire. As the food combusts, it releases energy; that energy is directed through a container of water. The more the water temperature increases, the more energy, or calories, in the food.

But that’s a measure of the total, or gross, calories. We’ve known for a long time that our bodies don’t necessarily get access to all those calories. Some calories can be metabolized by our bodies; the rest pass through in digestion.

In the 19th century, a USDA chemist named Wilbur O. Atwater came up with another way to measure calories that got at that difference. In experiments, he fed research subjects a carefully measured diet and kept them in a locked room outfitted with equipment that could account for the energy they expended, much like a calorimeter. Crucially, he also measured the products of their digestion. Taking all those measurements into account, he came up with a way to calculate—or, rather, estimate—the “metabolizable energy” in a given food by breaking it down into its component parts. Protein and carbohydrates, he concluded, both have 4 calories per gram; fat has 9. The figures 4, 4, and 9 are known as the “Atwater factors,” and they were said to apply to every food: cookies and milk, steak and potatoes, and, yes, nuts. The Atwater factors underwent some additional tweaking in the 1950s, but the idea, said David Baer, one of the researchers in the recent nut experiments, “became the basis for the food labeling we still use today.” In other words, food companies aren’t measuring actual calories; they’re using versions of the 19th century Atwater system to calculate them.

Which brings us back to the nut research. “There were some comments in the literature talking about the energy value of nuts, and suggesting that nuts aren’t digestible,” Baer said. “If they’re not digestible, that means more of the energy is passing out” of the body.

To see how much, they had to overcome some inherent problems in food and nutrition studies. People typically eat mixed diets, and it makes sense to mimic that in the lab. It’s a simple matter to carefully measure each individual food given to research subjects. But in digestion, all that food intermingles. How can you tell which portions of which foods the body is metabolizing?

“That’s been a problem since this concept was developed.” Baer said. “When we do our collection of the feces and urine, everything’s mixed together, so you can’t separate what’s cookie and what’s milk.”

In the past, some researchers fed research subjects a single food for a week or two at a time. “That gets around one problem,” Baer said, “but now you’re feeding a diet that’s atypical so it’s still not a great approach.”

Baer, along with USDA colleague Janet Novotny, started thinking about how to account for a single food, say, almonds, when feeding subjects a mixed diet. They came up with a plan to feed subjects a base diet, then tweak the base diet with measured quantities of nuts. But they couldn’t simply add the nuts to the diet. They had to precisely reduce the proportions of other foods so they’d have two comparable diets, causing neither weight gain nor loss. Then they had to analyze differences in feces and urine, which were collected daily. “Conceptually, it seems simple,” Baer said, “but it quickly became more math than I was willing to do.” That was Novotny’s specialty. She worked out the long equations to ensure the results would be scientifically valid.

The research was clear. Pistachios had 5% fewer calories than the Atwater factors say they have. Cashews were 16% lower. Almonds were 32% lower and walnuts were 21% lower.

If you’re trying to watch your calorie intake, those differences can be significant over time. Nut consumption has been linked in several studies to health benefits, yet some people forgo them thinking they’re high in calories and fat.

“Maybe this will reduce the barrier to consumption for some people,” Baer said.

Interestingly, USDA found those calorie reductions didn’t hold up when the almonds were ground into paste. Almond butter had more metabolizable calories than whole almonds. This and other studies have suggested that the texture of food plays a role in how much metabolizable energy it has.

It remains to be seen how many other companies might change their official calorie counts; for instance, California-based Blue Diamond said its legal and regulatory department was looking into the issue.

Beyond that, the body of research suggests there may be inaccuracies in many food labels, not just nuts. Now USDA is conducting similar experiments with chickpeas and lentils. “There’s always been a question of what is the energy value of fiber,” Baer said. It’s likely they’re lower in calories than we think, too.

Maureen O’Hagan is a longtime journalist who has received national awards for writing about food, healthcare and other subjects.