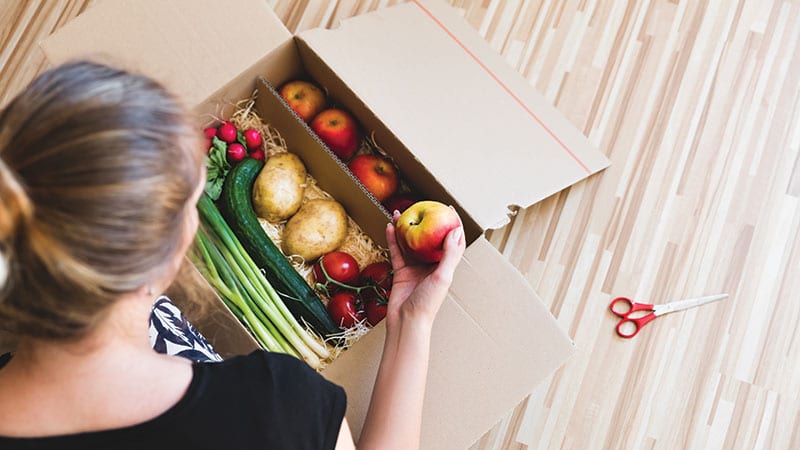 In the light-filled atrium of the UCSF Benioff Children’s Hospital in Oakland, California, pediatrician Dr. June Tester is enthusiastically talking about vegetables, whole grains and local agriculture. Unusual topics, perhaps, for a doctor at the region’s premier pediatric health center. But Tester is seeing a rapid increase in rates of obesity and diabetes among the children she works with, so she’s joined a unique effort that seeks to improve health outcomes using food.

Many of Tester’s patients are from low-resource families living in food deserts—residential areas where the closest stores carrying fresh vegetables or whole grains are miles away. In those same neighborhoods, fast food restaurants and corner stores—offering only sugary snacks, sodas and other empty calories—are often the only options.

But through an innovative Alameda County partnership linking health care institutions with healthy food sources, Dr. Tester is increasing her patient’s access to wholesome nutrition. In a 2017 pilot effort for Children’s Hospital patients, 60 prediabetic children and their families received weekly home deliveries of vibrantly colored organic vegetables and healthy whole grains for four months. With funding from both the county and grants, Dig Deep Farms (an organic urban farm employing the formerly incarcerated) and the Alameda County Food Bank filled the boxes with fresh produce and healthy pantry staples each week.

The precisely calibrated “food prescriptions” provided the exact amount of vegetables and whole grains the entire household should consume. “As doctors, we can tell people ‘eat more vegetables, eat more whole grains,’ but that’s not helpful,” Tester says. “What the food prescriptions did was give them a concrete visual of what they needed to eat to get their recommended servings.” Dr. Tester and her team also provided robust support for the families, including recipes, cooking videos, in-person cooking classes and texts.

The results of the pilot were astonishing. “What really surprised us was the health impact it had on the whole family,” says Tester. “We saw a huge, statistically significant change in eating habits—as a researcher, you don’t normally expect to see that in this small of a population. The change, in proportion to the degree of effort, was enormous.”

Children dramatically increased their whole-grain consumption and began eating vegetables they had never seen before. Parents also had significant health improvements. “Three-quarters of the parents in the study were either pre-diabetic or diabetic. We had several parents who didn’t even know it until we did the family health testing,” says Tester. “During the study, some of these participants had a 10-point drop in blood pressure, that can be the difference between being pre-diabetic and not.” Parents also showed improvements in other critical health markers like blood glucose levels and waist circumference. Tester says that these results are in line with other studies that have identified lifestyle changes as more potent than medication for some health issues.

Tester is part of a growing movement to make food a primary weapon against the onslaught of health issues like obesity, diabetes and heart disease. Several studies have shown that integrating nutritional support, in the form of healthy ingredients or meals, improves outcomes for patients with diseases ranging from HIV to cancer. The concept of integrating food into medical care is spreading, with “Produce Rx”-style efforts gaining traction across the country.

In Seattle, Swedish Cherry Hill hospital is on the leading edge of the movement with the culinary medicine curriculum they implemented in 2015 for medical residents—one of only a handful of hospitals in the country to do so. Nonprofit organizations, such as Lifelong’s Seattle-based Chicken Soup Brigade, are also providing healthy groceries and medically specific meals to help improve the health outcomes of people living with chronic illnesses.

In Alameda County, the healthy food deliveries for Children’s Hospital patients and their families were partly inspired by an effort nearby. In the county’s Hayward Wellness Clinic, a model combining a farmers market-style “Food Farmacy” with behavioral and social health services was implemented by Dr. Steven Chen beginning in 2013. The results he saw with his patients presaged what Tester found in her 2017 Children’s Hospital pilot, with marked improvements in health indicators ranging from depression to blood pressure to hospitalization rates. Impressed by the clinic’s results, Alameda County Supervisor Wilma Chan expanded the program, and the Alameda County Board of Supervisors soon voted to replicate the clinic-based effort.

Working out of a basement office in downtown Oakland, Chen, a Stanford-trained physician, is now overseeing the expansion of the Food as Medicine project throughout the entire county. Chen was recruited from Hayward Wellness to become the first-ever chief medical officer for ALL IN, the multi-pronged Alameda County anti-poverty initiative that Supervisor Wilma Chan helped launch in 2014.

Over the next year, ALL IN plans to fully integrate Food as Medicine, along with other wraparound services, into three additional Alameda County clinics, with more planned after that. All will offer food prescriptions written by medical staff paired with farmers market-esque Food Farmacies. Alameda County, Alameda Alliance for Health (a Medi-Cal entity), and the U.S. Department of Agriculture are collaboratively funding the expansion.

Beyond the clinical health improvements, Food as Medicine is also changing the way families cook and eat,even after the food prescriptions end. The participants in the Children’s Hospital home delivery pilot reported that, although it was challenging to find the time to prepare the at times unfamiliar ingredients, the program had a lasting impact on how they grocery shop and cook.

The mother of one 11-year-old girl says, “When we go shopping now, I read the ingredients for the sugar content, and the (whole) grains and sodium. And since (the Food as Medicine) delivery stopped, we’ve been doing the Imperfect Produce box—they give me a discount because of my income.” The mother of another 12-year-old participant reported a similar family experience. “It’s definitely changed the way we shop and the way we do things at home,” the mother says. “I’m reading labels more—even my cooking style. I don’t fry like I used to. And (my son) was really on it. Even if I would have a bad (food) day, he would be like, ‘Mommy that’s not healthy!’”

Tester saw the same results among other participants. “We had one little boy who, in his intake survey, rated vegetables as ‘do not like at all.’ Then, in his exit interview, he said, ‘You know, those little red lettuces, they were so beautiful. I would’ve loved more of those.’ Things like that are hard to measure—it’s a change in how this child feels about healthy food.” 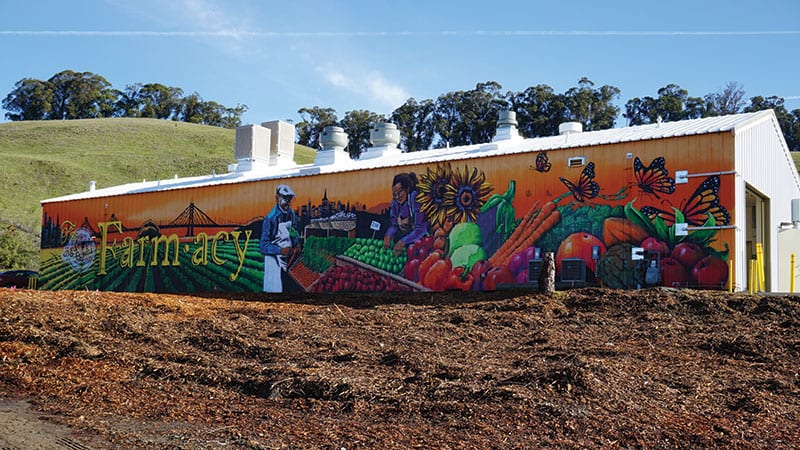 Photo courtesy of Food as Medicine

On a bright and sunny day earlier this year, on a hilltop with panoramic views of the San Francisco Bay Area, a crowd splashes through large puddles left by the previous day’s rain. A huge white building with a mural of fields and produce framing the word “Farmacy” is their focus. Inside, sparkling-new stainless-steel equipment gleams. Rows of industrial-sized sinks for cleaning produce from local farms line the front of the building, and restaurant-quality ovens, huge mixers and giant steamers fill the commercial kitchen toward the back.

This is the new Dig Deep Farms food hub, a 3,300-square-foot food distribution center designed to get healthy food to food-insecure Alameda County residents and supply the expanding Food as Medicine program. The result of a partnership that included the Alameda Sheriff’s Department, the Board of Supervisors and ALL IN, among others, the food hub will be the central point for organic produce from Dig Deep Farms and local food recovery programs to be cleaned, packaged and distributed. The facility will also provide small business incubation, classes, and events and catering to generate revenue for its operations.

At the ceremony marking the opening of the facility, the people who helped create the food hub speak briefly. As he takes his turn at the podium, Chen invites the listening audience to think big. “Imagine a world where people leaving every clinic appointment walk into a waiting room with a ‘food farmacy,’ where they select from fresh, local, organic produce to fill a prescription written just for them,” he says. “Where clinics have a ‘Farmacist’ trained in how to use food to support health. This is 21st-century medicine.” The group applauds energetically. The ribbon inaugurating the new food hub is cut, and the crowd surges outside into the warm sun to enjoy lunch featuring Dig Deep Farms-grown produce.

And back in the home of the 12-year-old who was one of the original Children’s Hospital pilot participants, there’s a lasting Food as Medicine reminder for the entire family. “He made a sign and stuck it under the clock,” says his mother proudly. The sign says: “No processed foods, no fast foods, no junk food.” The family is making it their mantra.

Samantha Nobles-Block (SNBwords.com) is a San Francisco Bay Area-based freelance writer. She is a monthly columnist for the San Francisco Chronicle’s Culture Desk, and her work has appeared in San Francisco Magazine, Heated Magazine and Edible East Bay, among others.

May and June Customer Service Stars

Members ask PCC board about growth and change