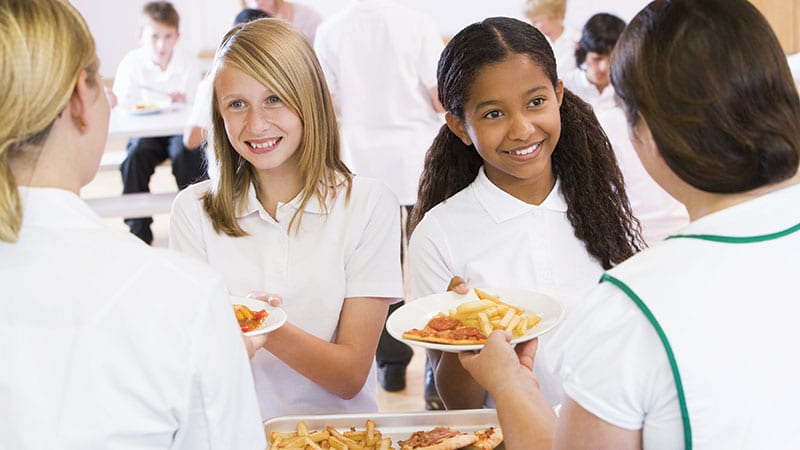 A simple question about animal crackers changed Bettina Elias Siegel’s life. Serving on a Houston parent committee to improve school cafeteria meals, she learned students were frequently required to take a package of the crackers at breakfast along with sugary cereals and sweetened yogurts.

“I raised my hand and asked, “Can you tell us why we’re serving animal crackers almost every day at breakfast?” Siegel wrote in her recent book, “Kid Food” (Oxford University Press, $24.95).

“Without missing a beat, the district’s dietitian replied, “Well, students are required to have a certain amount of iron every week, and the animal crackers provide it.” Seeing my obvious confusion, she added, “You know, from the fortified white flour.”

Siegel, an attorney whose practice included food law, became an advocate for better children’s food, creating an influential blog, “The Lunch Tray,” and studying the culture, science, politics and marketing that shape family meals. Her efforts included a successful petition against so-called “pink slime” meat in school meals and efforts to block a McDonald’s-produced “nutrition education” video from being shown in schools. She talked with Sound Consumer editor Rebekah Denn about what she’s learned.

Q: Why are all the issues pushing Americans toward unhealthy foods so significant for children, when adults are affected by them, too?

It’s true that most Americans, young and old, are pushed toward eating unhealthy food, but there are reasons to be especially concerned about children. For one thing, it’s much easier to prevent obesity than to reverse it, and obesity-related diseases like Type 2 diabetes tend to be harder to treat the earlier they develop. Moreover, children are impressionable, and the foods they eat in childhood can shape their eating habits for a lifetime—for better or worse. And finally, there’s the issue of food marketing. We adults are quite effectively manipulated by food and beverage advertising (why else would companies spend so much on it?), but our kids are even more vulnerable. Very young children can’t distinguish between advertising and the entertainment content in which it appears, and even when kids are older, they still may not understand marketing’s persuasive intent. Even teens, with their notably impulsive nature and susceptibility to peer pressure, are vulnerable to food marketers, particularly through the use of influencers on social media. For all these reasons, kids deserve our special attention.

Q: Why has the idea of “eating well” become such a politically charged issue? Why does it get framed as elitist instead of as a universal right?

That’s a complex question, but one obvious factor is the degree to which food and socioeconomics are so intimately bound. If you have fewer resources, you usually have less time and opportunity to carefully consider what and how you eat. So if someone seems overly concerned with those issues, it’s all too easy to brand them an “elitist.” It’s also true that conservative politicians eagerly capitalize on that divide, using food policy as a wedge issue and waving around the term “Nanny State” at every opportunity. It’s frankly quite depressing since, as you say, having regular access to affordable, healthy food should be recognized as a universal right.

Q: What are some of the most surprising things you’ve learned from your research?

I was quite surprised by the history of restaurant children’s menus! They first appeared in the 1920s, and I just assumed they must have offered that era’s equivalent of pizza and fries; dining out was even more of a special occasion in the ’20s than it is today, so why not indulge your child? But I discovered that the opposite was true. As I explain in more detail in the book, early children’s menus were meant to offer kids especially healthy food, even as their parents dined on more “sophisticated,” less healthy restaurant fare. It’s such a stark contrast to today’s paradigm.

On a darker note, I was also surprised to see how generally poor kids’ diets are in this country, in terms of not eating nearly enough fruits, vegetables and whole grains—and that holds true regardless of the child’s weight. It’s quite troubling.

Q: I was struck by the idea that American babies are eating pretty well between the ages of 6-8 months, but only a tiny percentage meet the federal guidelines thereafter. What went wrong?

I think the short answer is that as babies move from pureed food to finger food, they’re introduced to the “SAD” Standard American Diet. But if you drill down, you can also see some child-specific factors at play. One of them is the persistent health halo surrounding fruit juice. Even though the leading medical authorities say that babies shouldn’t have any juice, a lot of parents and other adults clearly think juice is a good choice for children, and maybe even a reasonable substitute for whole fruit. Similarly, children under age two aren’t supposed to have any added sugar, yet studies show that the majority of baby and toddler foods are sugar-sweetened. And then there are all the misleading nutrition and ingredient claims associated with baby and toddler foods, like fruit and veggie toddler puffs. These products are basically just starchy snacks, but because they mention kale and spinach on the canister, many parents may reasonably think they’re making a healthy choice.

Q: How can individuals work on the major problems with “kid food”? And are there things we can do on our own, without major changes to society and government regulations?

Starting in our own homes, we parents can think twice before we “short-order cook”—that is, offering other surefire kid-pleasers like chicken nuggets when children spurn our healthier meal. Doing so only reinforces for children the idea that “their” food is somehow different than “adult” food, and that neither you nor they truly believe they can learn and grow at the family table.

Outside our homes, we can reach out to independent restaurant owners (or, through social media, to executives at big restaurant chains) and tell them we’d love to see healthier and more diverse children’s menu offerings. In “Kid Food”, I cite a study of a regional restaurant chain that significantly improved its kids’ menu and actually saw its revenue increase. So perhaps restaurants just need our reassurance that we won’t take our dollars elsewhere if they start to clean up their children’s menus.

Similarly, parents might want to meet with their school nutrition director and ask how they can help him or her implement school menus with more variety and less “carnival fare.” Districts are often reluctant to make big, sudden changes to their menus, lest they lose participation and revenue, but parents could perhaps volunteer to regularly staff a sampling table, so kids can become more comfortable with new foods before they’re put on the regular menu.

Q: Are there ideas we could adopt from other countries to feed kids in a way that aligns with our stated values?

I don’t have firsthand knowledge of it, but everything I’ve read about school food in Japan is really inspiring. The food is reportedly scratch cooked and quite healthy, and students are responsible on a rotating basis for serving the meal and cleaning up afterward. The meal is considered part of children’s education, and I’ve even read that schools have nutritionists on staff to work directly with more reluctant eaters. It’s all such a stark contrast to the often rushed, overly processed meals served in our own school cafeterias.

Q: What makes this such a crisis today, when some of the issues around kids and food are timeless?

You can go back for generations and find all kinds of published child feeding advice, so it’s clear there have long been perceived challenges in feeding children well—however “well” was defined at the time. But what we’re facing today is categorically different, in that our children actually may have shorter lifespans than their own parents, entirely due to diet. It’s a tragic situation, and we need to do everything we can to reverse course.