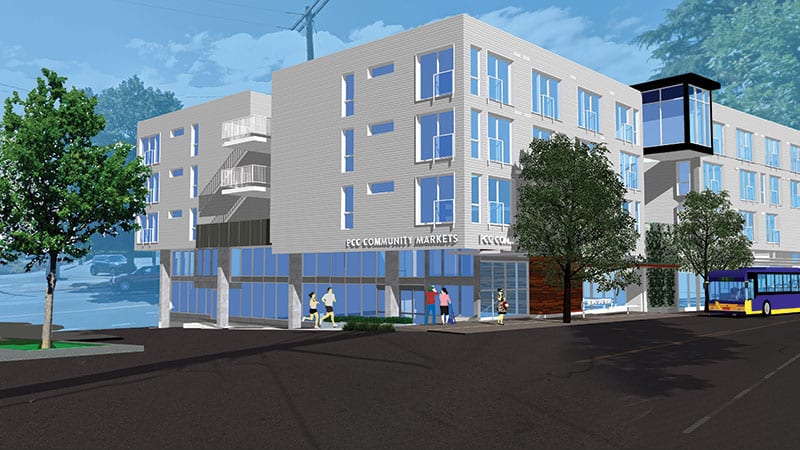 PCC’s original West Seattle store opened 30 years ago with clowns and jugglers, live jazz, and “a comparison tasting of organically and conventionally grown produce,” according to 1989 Sound Consumer reports. It closed in 2017 when redevelopment began on the site, with PCC promising to return with an expanded and improved store when the project was complete.

That day is arriving October 2, with a new West Seattle PCC that embodies our community ideals and offers more choices for customers and our 4,000 West Seattle members.

The booming neighborhood, like so many in the region, has changed in some ways since the original West Seattle PCC closed—but not in the ways that matter most.

“There are a lot of new buildings. Even the Junction, which is like our downtown area, has changed drastically… It’s still the same feeling, though,” said Emily Sly, who worked in the original store and is returning as the new store’s deli manager.

“Everybody is friendly on the sidewalk, people are still smiling.”

The 24,000-square-foot West Seattle PCC has an expanded produce department that’s nearly twice the size of the one in the original store, along with a bigger deli and cheese department and full-service meat and seafood counters. Its many new features include an outdoor patio, a taqueria, a café with bakery, and self-serve stations for grain bowls, pizza and PCC’s private-label yogurt. The bulk section, the largest at any PCC, will include bulk health and beauty care items such as shampoo, plus new offerings like bulk laundry detergent. PCC is pursuing Living Building Challenge (LBC) Petal Certification for the store, the world’s most rigorous green building standard, promoting energy efficiency and other sustainability features like electric vehicle charging stations. That effort included years of research and work on aspects like installing refrigeration systems that have a reduced climate impact, and using reclaimed building materials and finishes that avoid chemicals with the greatest health impacts.

Sly, a third-generation West Seattle resident, grew up shopping at the original West Seattle PCC, and when she joined the staff some cashiers remembered her as a child. “It was a small, family feeling,” she said. The store kept that atmosphere even as the neighborhood grew.

Some regulars came through three or four times a day. Over Sly’s six years there, she got to know shoppers from pregnant women (and, as the years passed, the babies who grew into toddlers and schoolchildren) all the way up to elderly customers stopping by with caretakers.

“That was what I really missed (during the hiatus), my regulars…It was less leaving the building and more leaving them that made it really difficult,” she said. “But now we can offer so much more.”

The original West Seattle store was small by modern standards but was the co-op’s biggest outlet when it opened in 1989. It was the eagerly awaited sixth PCC store in a neighborhood that more than 60% of members had requested as the location for the next site.

More than 1,100 people came out for opening day, where featured sale items included “Vegi-Patties” at $1.51 for a 12-ounce package and bulk salt-free “Nutri-Nut Mix” at $2.60/lb. “Back to basics” cooking classes had some similar themes as modern ones but drier names; one was titled “The Soy Foods: Tofu and Tempeh” and another “Dry Beans, Peas, Lentils.”

All former West Seattle staff members were offered jobs at other PCC branches during the hiatus. Some 49 people who worked at West Seattle when the original store closed are still PCC employees and 15 are returning to the new store. The store director will be Nate Rundle, who’s been with PCC since 2007, most recently as director of the Redmond PCC. The assistant director is Zuzana “Z” Fekiacova, who previously held that role at the Columbia City Store, a West Seattle resident who holds a degree in aerospace engineering (one that she “uses daily when encountering challenges and solving problems.”)

Shoppers stayed connected as well: More than 80% of West Seattle members remained active and engaged with PCC during the store’s closure, many first shopping at the Columbia City store, then some switching to the Burien store when that PCC opened last year.

PCC has also maintained its relationships and continued its community outreach in West Seattle, including our partnership with the West Seattle Food Bank, sponsorships of community events, and donations to many schools, nonprofits and neighborhood programs.

During the hiatus, Sly had first moved to the Columbia City PCC, where “I met people from all different areas and walks of life… I also got to develop a lot of people and be developed myself.” A stint in the View Ridge store helped broaden her skills and prepare for the West Seattle return.

She’s moved back to West Seattle in preparation for the opening and said a regular from the old location saw her and called out her name from 30 feet away, saying “Oh my gosh, are you coming back? We’ve missed you!” she said.

“Even after two years, they still remembered my name and everything else. And I remembered theirs.”