Mushroom farming and “cultivating the forest” 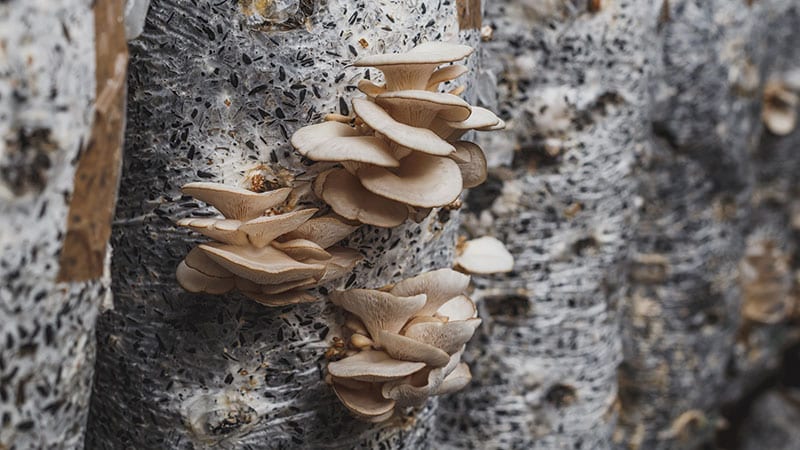 Foraged or farmed—those are usually the two options available to consumers of local mushrooms. Now a third way may be emerging in the Pacific Northwest—forest-cultivated mushrooms. A group of fungi experts are studying how to expand opportunities for forest-grown mushrooms, hoping to improve forest health, help farmers develop new crops, and produce more food from renewable resources.

Farmed mushrooms are usually grown indoors in a sterile, climate-controlled environment to provide standardized and predictable yields. Carbon rich material is placed in bags and inoculated with mycelium that produce the mushrooms.

In contrast, the practice of forest-grown mushrooms begins with thinning out young, crowded deciduous trees in the late winter to early spring, cutting the logs into even lengths, and then inoculating the logs by drilling holes and placing in plugs that are inoculated with the desired mycelium. The logs are then stacked in a shaded location either in the forest or near a water source and the farmer waits a year or two before the logs fruit with mushrooms.

Forest-grown mushrooms are generally produced by farmers and forest owners in parts of the eastern and midwestern United States, as well as in Japan, but commercial production of such outdoor mushrooms is still rare in the Puget Sound marketplace. Now a team led by Washington State University (WSU) researchers is examining whether this practice can be commercially viable in the Northwest.

“There’s potential for a craft market for mushrooms that doesn’t currently exist in our area,” said Justin O’Dea, one of the researchers, who administers the regional agriculture program for WSU in Clark, Cowlitz and Skamania counties. The research team theorizes that the lack of summer humidity may affect productivity here. By finding ways to increase the moisture levels in the area of the inoculated logs, production may increase. Examining varieties such as Stropharia, Oyster, Shiitake and Lions Mane, the project uses low-input methods that farmers or small woodland owners could easily replicate, such as raising the humidity by using misters or putting buckets of water with the inoculated logs and then covering them with a tarp. The goal, O’Dea said, is to be simple and lean.

A benefit of the project is reducing forest wildfire risks by removing the excess weak and congested trees that are a result of historical mismanagement and contribute to summer fire hazards. Producing edible mushrooms could convert a problem into an asset, removing the excess wood while mimicking a natural part of a forest ecosystem in producing mushrooms. The concept drew enough interest that WSU funded the research project with an internal university grant that runs through 2021. The research team is working with local mycologist experts at Fungi Perfecti to find the easiest and lowest cost methods for inoculating trees. “We aren’t trying to recreate the wheel,” O’Dea said, stressing that the model they are using for log inoculation is the same one used in the eastern United States and Japan. Their goal is to expand upon these practices and increase efficiency.

O’Dea sees forest-grown mushrooms as their own market category. “Our goal is to develop a system that could be used by forest landowners or farmers so they could start making an alternative income stream from their forests,” O’Dea said.

In essence, anyone with woodlands in their backyard could become a mushroom farmer.

Sound tempting? While the research isn’t complete, you can try your own outdoor grown mushrooms by contacting the experts at Fungi Perfecti to learn more and purchase materials (fungi.com).