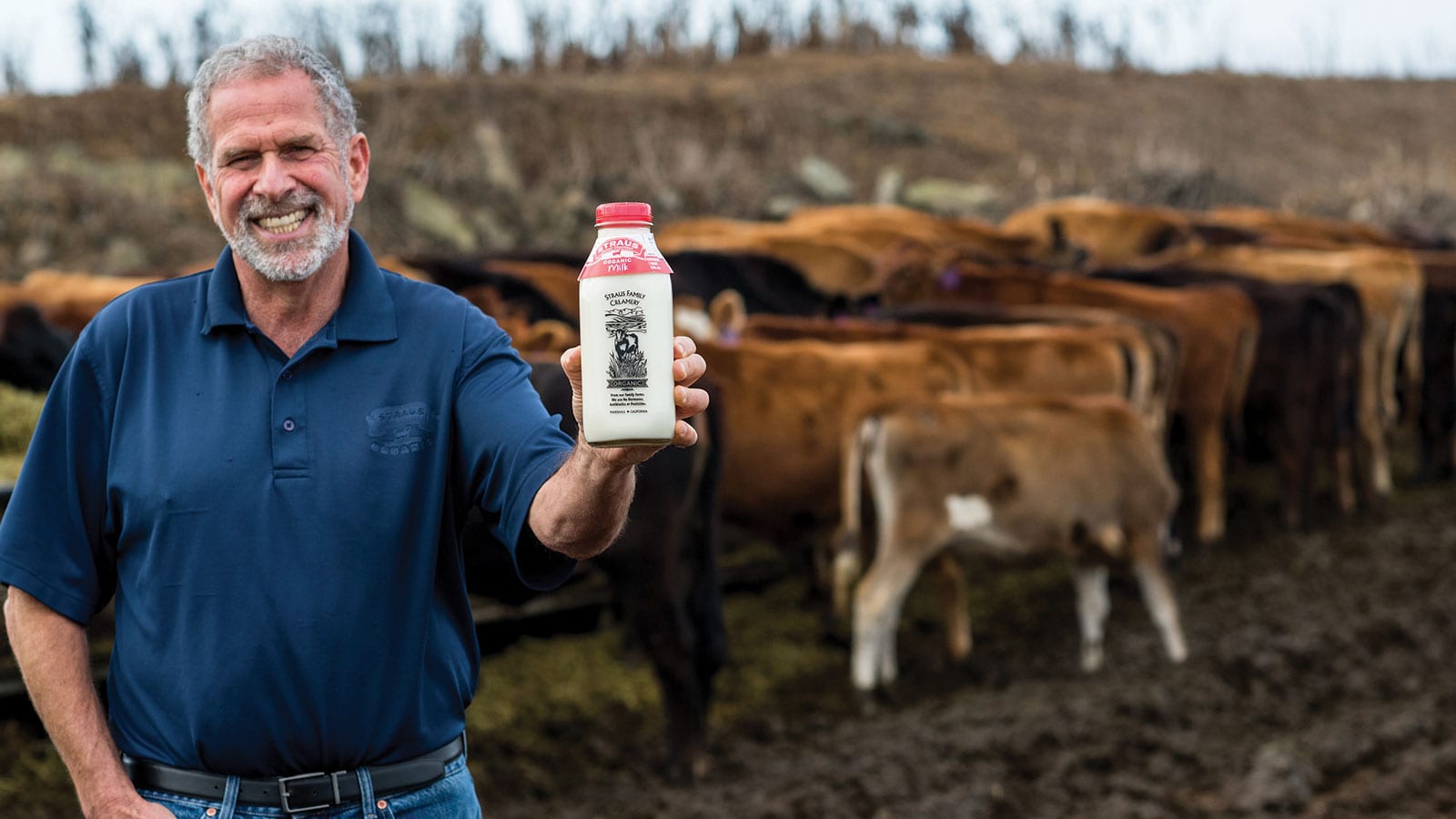 Albert Straus is as much farmer as CEO, most comfortable in jeans and a work shirt. He has a purposeful look as he points to the photos of family dairy farmers around the walls of the conference room at Straus Family Creamery. The gesture is a quick summary of what he is about. “To sustain family farms,” he says, “is the underlying factor in our decisions.”

It’s an extraordinary mission, given the U.S. Department of Agriculture calculates that 94 percent of dairy farms have shut down since 1970, and about a third of the world’s agricultural greenhouse gas emissions is from livestock (see sidebar). It’s even more extraordinary given that Straus’ overarching goal is to transform the role of dairies from ecological polluters to sites that sequester carbon. “What we are showing,” he says, “is that organic dairy farms are a primary solution to climate change.”

The Straus family has faced extraordinary odds with creative solutions before. “My father fled Nazi Germany,” says Straus. “He looked for a climate most like Hamburg.” Eventually in Marin County, California, he found an ideal setting — diverse grasslands and mild coastal temperatures. He started Straus Dairy Farm in 1941 with 23 Jersey cows, a commitment to be a responsible steward of the land, and little hands-on experience. “They were city kids,” Straus says of his parents Bill and Ellen.

It was more than a property to the late Ellen Straus. She was quoted in a news story about her exceptional life: “To us, the farm really is a dream that our people have had for centuries — it was to get back to the soil, to be a whole people.” But it was a struggle.

The price for milk often was set so below production costs that neighboring family dairies began to fold. A housing development was proposed to cover the open rolling hills.

“We decided to take a stand. Even when it was very, very hard and we hardly could make it, there never was any idea that we would give up,” Ellen said.

Ellen formed rare partnerships between farmers and environmentalists, co-founding the Marin Agricultural Land Trust (MALT) in 1980, the first agricultural land trust in the nation. That innovative plan to protect agricultural lands in perpetuity by compensating farmers for staying in agriculture has become a national model.

By the 1970s, Albert Straus had joined his father in managing the dairy but the odds mounted against surviving unstable milk prices. He came to the ethical and economic decision to make Straus Dairy Farm the first certified organic dairy west of the Mississippi River.

The Strauses were among the farmers that put MALT conservation easements on their land. Part of the money they received in return was used for transitioning their pastureland to organic, which takes three years. “At the time,” says Straus, “neighboring farmers wished us well but thought we were totally crazy.”

That same year he founded Straus Family Creamery — the first 100 percent certified organic U.S. creamery — offering a viable, sustainable business model for small dairy farms. He asked eight other family dairies to convert to organic production — the families he pointed to with such pride in the photos on his walls.

Straus now has 280 Jersey and Holstein cows on 500 acres, about midsize among the dairies in the supply network. Their model provides stable pricing for the farmers and certified organic milk for the creamery.

“Less is more when it comes to taste,” he says. Most commercial milk is ultra-pasteurized at high temperature to increase shelf life, but Straus processes at a lower temperature.

“The idea is that you kill off the harmful bacteria and retain flavor,” he says.

The creamery also produces European-style butters, Greek and European-style yogurts, sour cream, half-and-half, and whipping cream that one taster said “whips itself.” Straus ice creams are one of the few organic brands that don’t add stabilizers. All are sold at PCC.

“We take our responsibility to the climate very seriously,” he says, explaining that the creamery recycles, repurposes and reuses about 92 percent of all materials and runs completely on renewable energy. Selling their milk in glass bottles keeps about 500,000 pounds of plastic containers out of the waste stream each year. 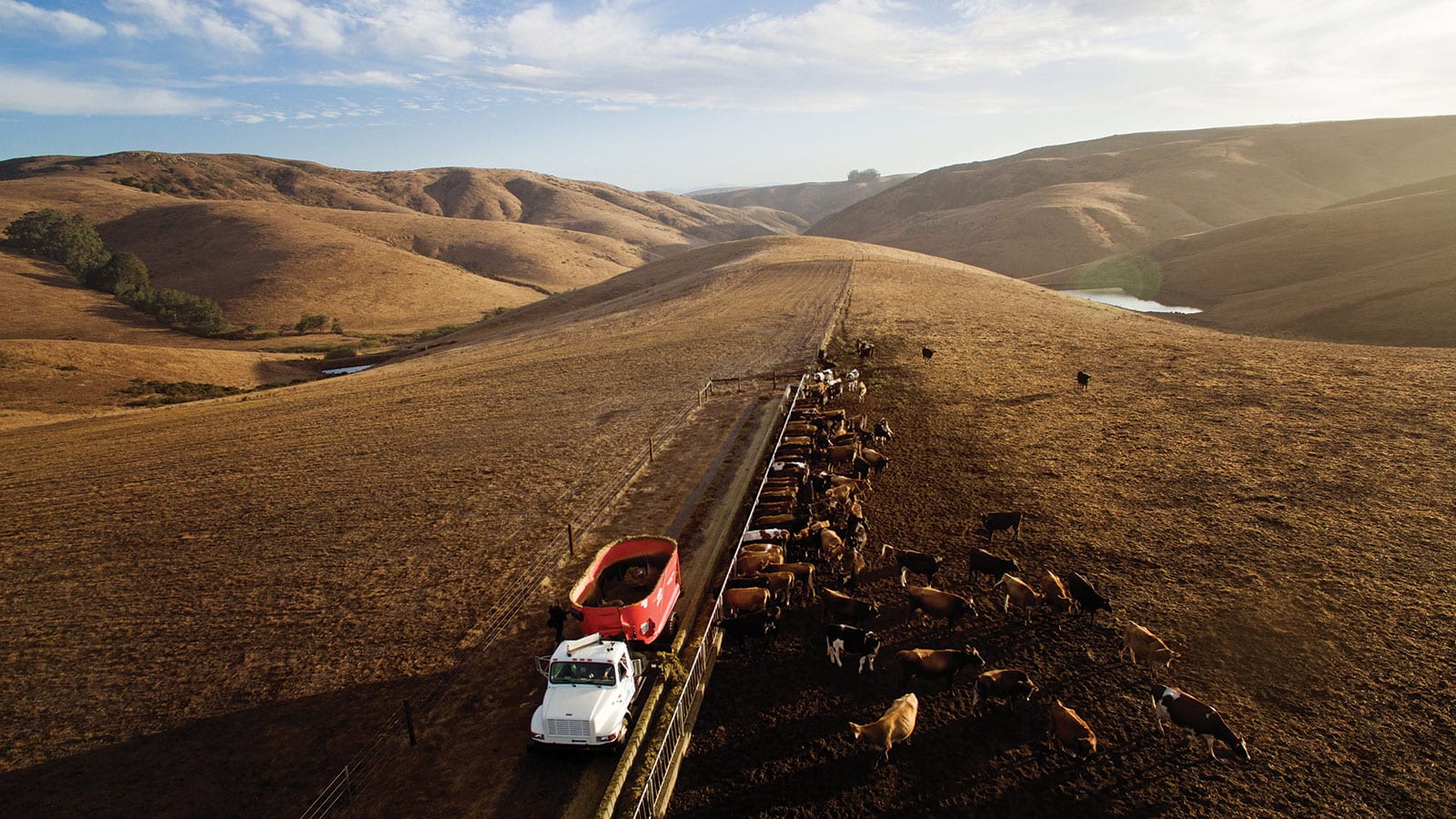 A system that recycles wastewater from the creamery provides water to flush out the barns. There, almost 4,000 gallons of manure daily goes into a methane digester that produces biogas, reducing harmful emissions annually by 1,645 metric tons of carbon dioxide equivalent (CO2e). The biogas is converted to electricity that powers the entire farm, including the first full-scale electric feed truck that feeds the cows. “It’s a closed loop,” says Button.

The manure solids are composted and then spread on grazing land, to produce fresh grass for the cows, while sequestering carbon. Straus notes, “We have a goal for my farm to become carbon neutral within three years and the other eight farms in five to 10 years.”

Since a state mandate that will require a 40 percent reduction of on-farm methane emissions below 2013 levels by 2030, Straus and Button are looking for further incentives. They commissioned a NASA scientist to study 18 years of satellite images that show that the farm’s rotational grazing for carbon management saves about $100 per acre in feed expense.

Even so, the methane digester is responsible for 80 percent of the CO2e reduction on the farm. A digester is like a small power plant. They are testing two more easily manageable units. Says Button, “We hope to have a solution that organic dairy farmers can use to turn that manure into renewable energy.”

Straus is hoping for broad change: “We’re trying to create a model of farming as a regional solution. That’s why we don’t sell our products nationwide. The idea is to have a model that other rural communities struggling to survive will be able to replicate.”

At the base of it, says Button, gesturing to the pictures, “Farmer first.”

When Straus’ mother Ellen was honored by the National Farmland Trust, she said that World War II had taught her, “That we, as individuals, are responsible for what is happening in our communities and that we must become activists.”

Animal agriculture — in the context of total agriculture sector emissions — is a large contributor of greenhouse gases (GHG). However, the transportation and electricity sectors each have three times the footprint of all agriculture, according to 2015 Environmental Protection Agency (EPA) emissions data.

According to EPA, agriculture — including the cultivation of crops and livestock, as well as deforestation — contributed 24 percent of global GHG emissions as an economic sector in 2010. Yet, EPA also says that as our energy use and transportation needs increase, the percentage of global GHG emissions from agriculture actually decreased to only 9 percent by economic sector in 2015. Of that 9 percent, “almost one-third” of total emissions from agriculture is methane from livestock.

M.E.A. McNeil is a writer and Master Beekeeper and lives with her family on a Northern California organic farm.