Organics and health: Beyond our own bodies 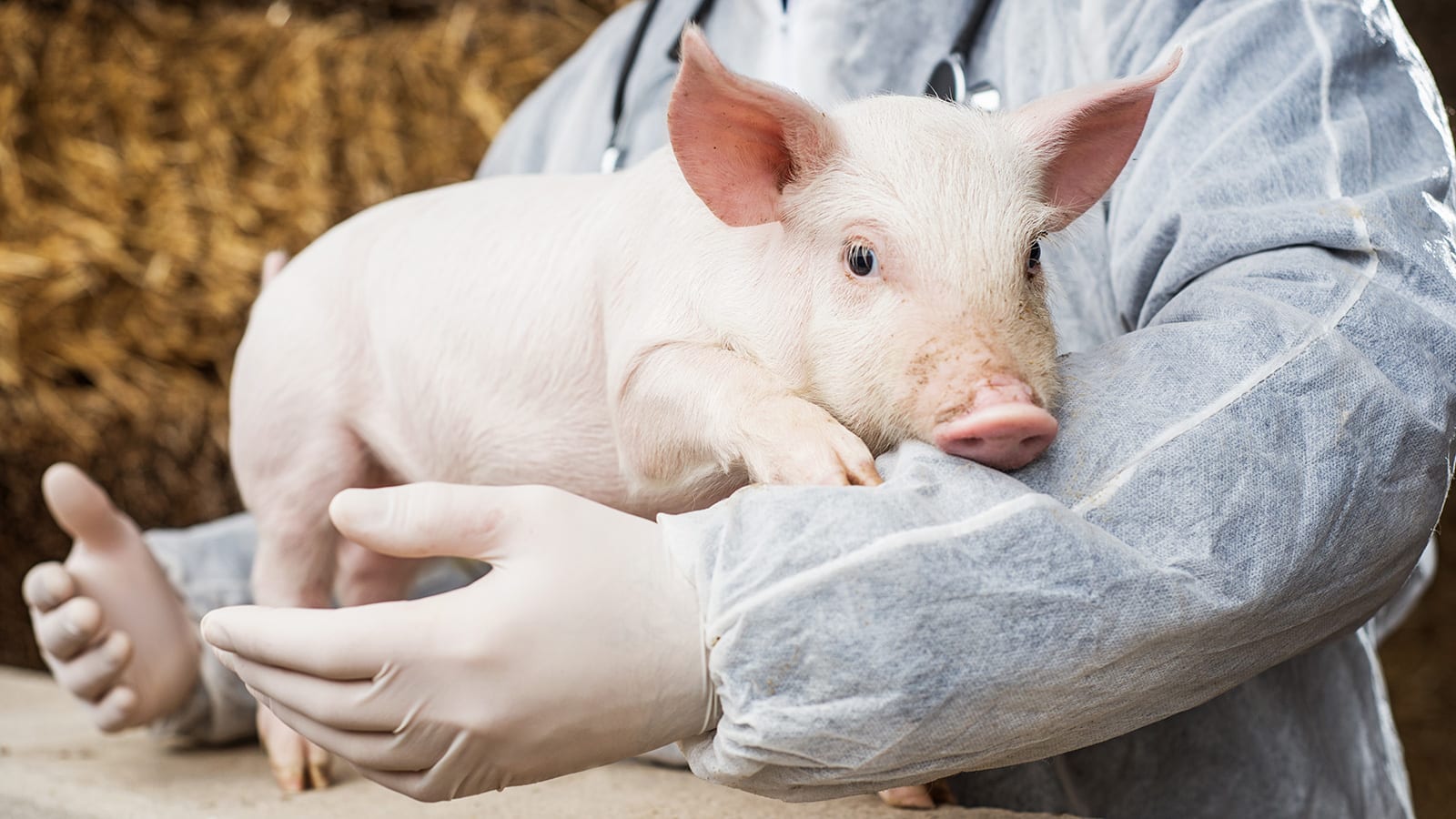 If you’ve made it to February without contracting some sort of cold or flu, your immune system is stronger than mine. Power to you — I want to know your secret! For the rest of us, we’ve likely spent some days in bed already this winter, wishing we didn’t feel quite so miserable. While there are some tea or soup tricks I use to try to ward off the winter bugs, it’s important to remember that food plays a role in our health that goes far beyond what we put in our bodies.

The ways that food is produced, and particularly processes of animal production, have major implications on health outcomes globally. Common bugs (and quite serious ones) come to us generally in the form of either bacteria or viruses.

Most common bacterial infections have been well controlled since Alexander Flemming’s discovery of penicillin in 1928, the world’s first antibiotic. Today, for the first time since the dawn of the “antibiotic era” of the mid-1900s, we are unable to treat some previously treatable common bacterial infections due to bacteria’s rapid ability to evolve into antibiotic-resistant strains. Viruses, too, are growing more powerful and deadly. Many point to industrial meat production as an incubator for these new, stronger, and harder-to-control viral strains.

In November the World Health Organization (WHO) announced that antibiotic resistance is one of the biggest threats to our global health, food security and development today.

Tedros Adhanom Ghebreyesus, director general of the WHO, explained: “A lack of effective antibiotics is as serious a security threat as a sudden and deadly disease outbreak. Strong, sustained action across all sectors is vital if we are to turn back the tide of antimicrobial resistance and keep the world safe.”

Although some antibiotic resistance occurs naturally, the high use (and misuse) of antibiotics in humans and animals is accelerating the process such that a growing number of common infections — such as pneumonia and tuberculosis — are becoming harder to treat as the antibiotics previously used to treat them become less effective.

WHO’s November report specifically calls for the prevention of mass antibiotic use on animals raised for food, recommending an immediate ban on “antibiotics for growth promotion or to prevent diseases in healthy animals.”

According to the Food and Drug Administration (FDA), 80 percent of the antibiotics used in the United States go to animals. At the same time, at least two million people become infected with antibiotic-resistant bacteria in the United States each year, and at least 23,000 people die per year as a direct result of these infections.

Animals treated with antibiotics can develop drug-resistant bacteria that are passed on to humans through contact with farm workers, or through the food chain itself. Investigative journalists from The Guardian found drug-resistant MRSA strains in a significant sample of pork products on the UK’s supermarket shelves, posing a health risk to humans.

A separate report from the United Nations Environment program found that antibiotics used in industrial animal farms can spill over into the surrounding environment through water runoff and slurry, allowing antibiotic agents into the natural environment with unpredictable effects.

Will cutting back antibiotic use on animals make a difference? Recent research in The Lancet points to yes, finding that restrictions on farm antibiotic use led to a reduction of antibiotic-resistant bacteria in farm animals by up to 39 percent.

The virulence (strength) and pathology (cause and effect) of viruses also are impacted by industrial agriculture. These connections are most noticeable in the spread of influenza, otherwise known as the flu.

Flu season often begins in October or November, peaks between December and February, and can last as late as May. The Centers for Disease Control and Prevention (CDC) collaborates with research institutes worldwide to predict and monitor the spread of different strains of influenza, which is how the specific strains for the flu vaccine are determined each year. Unlike bacterial infections, a virus cannot be treated with antibiotics but can be inoculated against through the preventive measure of a vaccine.

Alongside concerns about antibiotic misuse in industrial animal production, the close quarters of CAFOs (Confined Animal Feeding Operations) also creates a prime breeding ground for virulent virus strains. The high concentration of animals living close together means that a virus can kill its host quickly and still have a strong chance of infecting other animals — this is much less likely to occur in the wild or in more spread-out populations where rapid death can inhibit the spread of an overly virulent virus. The stress of confinement and exposure to high concentrations of ammonia, hydrogen sulfide, and other gases from concentrated animal waste also leaves animals more susceptible to viral infections.

WHO first verified in 2009 that transmission of viruses from animals to humans can cause “community-level outbreaks.” The 2009 H1N1 virus caused a global pandemic, infecting millions and killing an estimate of over 200,000 people worldwide. H1N1 was a unique combination of influenza virus genes that had not previously been identified in either animals or people, a harbinger of virus strains to come.

These types of unique virus gene combinations that move rapidly and are difficult to control are becoming increasingly common. While the CDC and other health watchdog organizations pay great attention to the virology and spread of new influenza viruses, there has been less effort to examine the social and political origins of influenza.

Some researchers are pointing toward CAFOs and the industrial farming of fowl and swine as disease incubators, documenting an unprecedented variety of new influenza strains emerging worldwide in industrial animal farms.

Pigs pose a particular risk as they can host multiple types of influenza, mixing strains together and easily spreading new viruses to people.

Researchers at Duke University found that in years when the H1N1 swine influenza virus was circulating, the epidemic peaked the earliest in North Carolina counties with the greatest number of swine CAFOs. These same areas did not experience early flu peaks in years when the H1N1 virus was not prevalent, demonstrating a connection between swine CAFOs and disease spread to adjacent communities.

Viruses can move in other ways, too. The animals farmed in CAFOs generate massive quantities of waste, roughly 335 million tons per year. This waste attracts flies and other animals that can carry viruses long distances. The global transport of food animals also may lead to the dispersal of thousands of viruses along the food supply chain.

PCC has a long history of attempting to curb the use of antibiotics in livestock. In 2000 we publicly thanked then-Rep. Sherrod Brown (D-Ohio) for sponsoring the first Preservation of Essential Antibiotics for Human Diseases Act, noting the human health and food safety risks of excessive antibiotic use. In 2005 PCC was one of 300 parties that supported a successful campaign to withdraw the approval of certain antibiotics in poultry farming.

Industrial farming of fowl and swine may be to blame for unique, new influenza strains

In 2007 we urged U.S. House and Senate Committee members to support another Preservation of Antibiotics for Medical Treatment Act, limiting the use of seven classes of antibiotics used to treat animals. In 2011 PCC joined 377 other health, agriculture, environment, animal protection, religious, and other interest groups in support of the Act.

We have long promoted strong animal welfare standards, writing to the National Organic Standards Board (NOSB) in support of meaningful “outdoor access” for organic poultry in 2011, advocating at least five square feet of outdoor vegetated space for each chicken and turkey, and mobilizing engagement against the U.S. Department of Agriculture’s rejection of organic animal welfare rules in 2017.

We do not allow any eggs from caged hens in our stores and all our fresh meat is produced without added hormones or antibiotics. We are also strong proponents of outdoor access and pasture for all animals. All of our fresh meat, poultry and milk is from animals that at least have outdoor access, if not access to open range or pasture.

Research from the University of Arizona found that the strongest driver promoting the purchase of organic foods is our own health, primarily we want to avoid ingesting the high degree of synthetic chemicals used in conventional agriculture, and many of us also believe that organics are more nutritious.

Yet, purchasing organics goes beyond protecting our bodies from ingesting pesticides. In dairy, for example, organic certification requires that no growth promoters or hormones are used and that antibiotics may not be used routinely as preventive measures in crowded conditions, for feed efficiency, or to promote weight gain. Further, organically certified cattle, sheep and goats must have access to outside pastures and direct sunlight, while conventional dairy farms are not required to pasture ruminants.

Organic practices help to ensure animal welfare and animal health, not only for farm animals, but for us, too. Limiting antibiotic use and promoting pasture, for example, supports an ecosystem where antibiotic-resistant bacteria and new strains of virulent viruses cannot as easily thrive.

So, what can we do? We can buy organic and antibiotic-free products.

We can also lobby our legislators to promote strong animal welfare standards and antibiotic use restrictions — holding our representatives accountable to ensuring public health as a top priority over industry profits.

We can continue to educate ourselves and share information with our family and friends.

It’s something to ponder, the next time you’re staying home sick.

An integrated approach to health

A healthy food system is humane and just, protecting farmers, workers and consumers, and providing nutritious food while maintaining ecosystems that can support generations to come. At PCC we support healthy food consumption and production in many ways.

Nutrition education is integral to our mission. We provide classes with credentialed nutrition educators in our stores and communities, as well as staff trainings on a variety of topics to ensure that our staff is knowledgeable and well-prepared. Nutrition educator Nick Rose discusses preventing hypertension through healthy eating. Learn more here.

PCC is a certified organic retailer, where 95 percent of the produce sold is organic. Organic methods restore and enhance ecological harmony without toxic pesticides or fertilizers, genetic engineering, sewage sludge or irradiation.

We are deeply committed to being a positive force in the lives of all the people working across our supply chain. We do not tolerate child labor, forced labor, human trafficking, abuse or harassment. We have created and adopted specific standards to avoid labor abuses common in the chocolate, banana, coffee and seafood industries.

This Sound Consumer issue is focused on health in its many forms: striving to promote healthy communities, a healthy planet and a healthy you.