Hot buzz on a chilling future for coffee

This article was originally published in January 2018 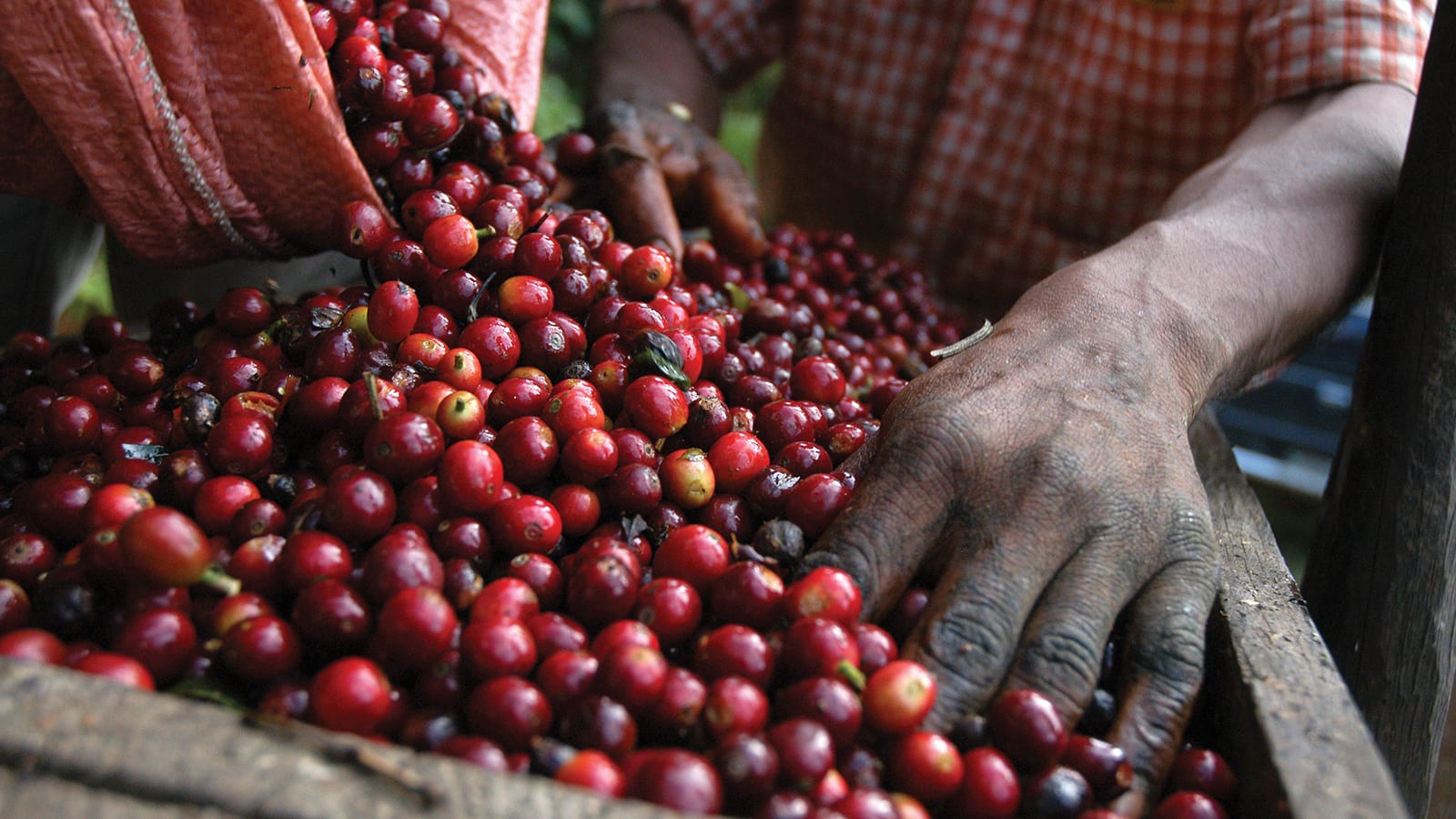 Java fans may have gotten an unpleasant jolt from a recent Smithsonian report that productive land for growing coffee in Latin America could shrink as much as 88 percent by 2050. The loss of productive land, researchers say, is due to climate change and bee health.

The warming scenarios considered for Latin America showed “a decline 46 to 76 percent greater than estimated by global assessments,” according to the study published this September 2017.

The dire outlook is tied, surprisingly, to five key species of bees. Latin America primarily produces Arabica beans whose flowers are pollinated by bees at altitudes of 2,000 feet and higher. The fruits of the flower, when pollinated, are fat, egg-shaped and produce fully developed beans. Un-pollinated plants yield scrawny beans, which diminishes the yield for a plantation.

If bees don’t fare well, neither do farmers or markets, nor do the economies that depend on stable coffee production.

“It’s beyond shocking,” says Liam Brody, president of Sustainable Harvest, a Portland, Oregon company that bills itself as promoting “relationship coffee.” “It can be petrifying for the industry,” Brody adds, “when the problems are of such a great magnitude that people don’t focus on the magnitude but rather the pieces.”

The magnitude of the concern encompasses the whole planet, not just Latin America. The globe’s top 10 coffee producing nations lie within a belt extending from 30 degrees above the equator to 30 degrees below: Brazil, Vietnam, Colombia, Indonesia, Ethiopia, India, Mexico, Guatemala, Honduras and Peru.

The coffee trade itself encircles the lives of some 100 million people globally, with 20 to 25 million families in roughly 50 nations working for smallholder farms, according to the World Bank. In the U.S. alone, coffee netted just over $5 billion in sales in 2016.

David Yake, director of sales and marketing for Tony’s Coffee in Seattle, notes that the threat to coffee production from climate change isn’t limited only by bee health.

La roya, which appears as a scattershot pattern of decay called leaf “rust,” is a fungus that thrives during periods of high rainfall and elevated temperatures. La roya can be devastating to yields and to local economies. According to The New York Times, a la roya blight in Guatemala in 2014 led to the loss of nearly 100,000 jobs in the nation’s coffee industry.

“We’ve seen firsthand the effects of climate change,” Yake explains, “with the introduction of la roya in Central and South America. We’ve seen coffee yields drop by 90 percent. Honduras, Colombia, El Salvador and Chiapas, Mexico, are some of the hardest hit. Climate change brings a lot of instability to the market and instability is bad for farmers, importers, roasters and retailers.”

Coffee’s market instability stems from a lack of any reasonable assurance that a coffee crop will produce as expected, or even survive, should la roya descend on the crop, a drought prevail, or severe storms sweep a region. It takes coffee plants three to five years to produce mature beans. Given that farmers can’t adequately anticipate rainfall patterns from season to season, it follows that planting a crop that won’t begin to repay one’s investment for up to half a decade is an extremely risky business. Even if the plants survive to produce the pollinated fruits that are processed into dry beans, wetter weather and longer drying times still could lead to mold and loss of flavor, and potentially the loss of an entire crop.

In Mexico, Oaxacan coffee farmers are now for the most part “gone.”

Considering the stakes at hand, coffee producers and stakeholders are responding to climate change as best they can. They’re targeting research toward new cultivars that can produce high yields at higher elevations and toward plants that can withstand assaults from la roya and other blights or insects.

“You see a lot more science in coffee now than you did years ago,” Brody observes. “Scientists are using artificial intelligence, using cameras to document plant health, planting varieties of cultivars all over the world at different altitudes under different climate regimes, in grids [where they can be analyzed easily]” and testing them for survivability and the quality of beans they produce.

Brody notes that in Mexico, Oaxacan coffee farmers are now for the most part “gone.” He says, “Farmers in Oaxaca ended up defaulting on loans for a season or two and couldn’t hold it together. Now they’re bankrupt, off their land, living in the city.”

The fact is that no region on earth, or the living beings that reside there, can escape the reach of climate change. In the United States, rising temperatures — along with urban development, pesticide use and pollution — threaten local biodiversity and, with it, agricultural production. Pollinators are particularly hard hit. Recent harsh winters in the Dakotas, Montana, Minnesota and Iowa have culled honeybee populations by about 70 percent, according the Centre for Research on Globalization (CRG). In Oregon, the Franklin’s bumblebee (B. franklini), common until the mid-1990s, is now believed to be extinct.

“In the last half decade alone, 30 percent of the national bee population has disappeared and nearly one third of all bee colonies in the U.S. have perished,” notes the CRG, adding that about $40 billion in agricultural products in the United States are dependent on bee pollination.

“Climate change and pollinator health are huge concerns for us,” says Mace Vaughan, Pollinator Conservation Program co-director for the Xerces Society, the world’s foremost invertebrate conservation association. Vaughan notes that Xerces is focused heavily on programs in the United States to increase the resiliency of invertebrate populations to the wildly variable temperature swings and precipitation patterns that climate change has wrought.

Climate changes impacts bees in many ways, including the loss of habitat due to drought in some regions, physical damage from winds, or excessive moisture, which can cause root rot, promote fungal growth and speed soil erosion.

Among those efforts are programs in 15 states (including Oregon, Washington and California) to improve the architecture of fields and farms — meaning an emphasis on planting shrubs and trees of different heights, focusing on species that are drought tolerant, and particularly employing flowering plants that produce pollen and nectar even under extreme climate conditions.

In Washington’s Skagit Valley, for example, Xerces is working with blueberry and strawberry farmers and the National Resources Conservation Service to increase plantings of hedgerows and cover crops to boost soil health, permeability, and the ability to hold moisture in times of drought.

Brody, who as a former senior vice president for Root Capital distributed about $1 billion in microloans to smallholder farms, remains optimistic about coffee production under a seemingly nearer sun. But as an investor, he’s a realist as well.

“Some companies are just going to move on,” Brody notes. With no effort to research alternative cultivars, no improved soil or biodiversity conservation programs, and no change in land stewardship toward building resiliency, he says, “It’ll be like musical chairs.”

“And of course others will stick with it,” Brody concludes about those working to protect pollinators. “Will it help enough, and will it be fast enough to truly turn the tide? I’d say yes, if more of us work harder and contribute more.”

Pollinator conservation in your backyard

Steps you can take to help bees everywhere, starting in your own backyard!

Letters to the editor, January 2018

Our food system and changing climate

Climate change is among the greatest threats to our generation and future generations — impacting public health, ecosystems and economies around the world.

CJ Buxman operates a 150-acre certified organic farm, growing citrus as well as apricots, peaches and pomegranates. In many wayshe’s thoughtful about his approach to soil, pests and his trees.