This article was originally published in December 2017 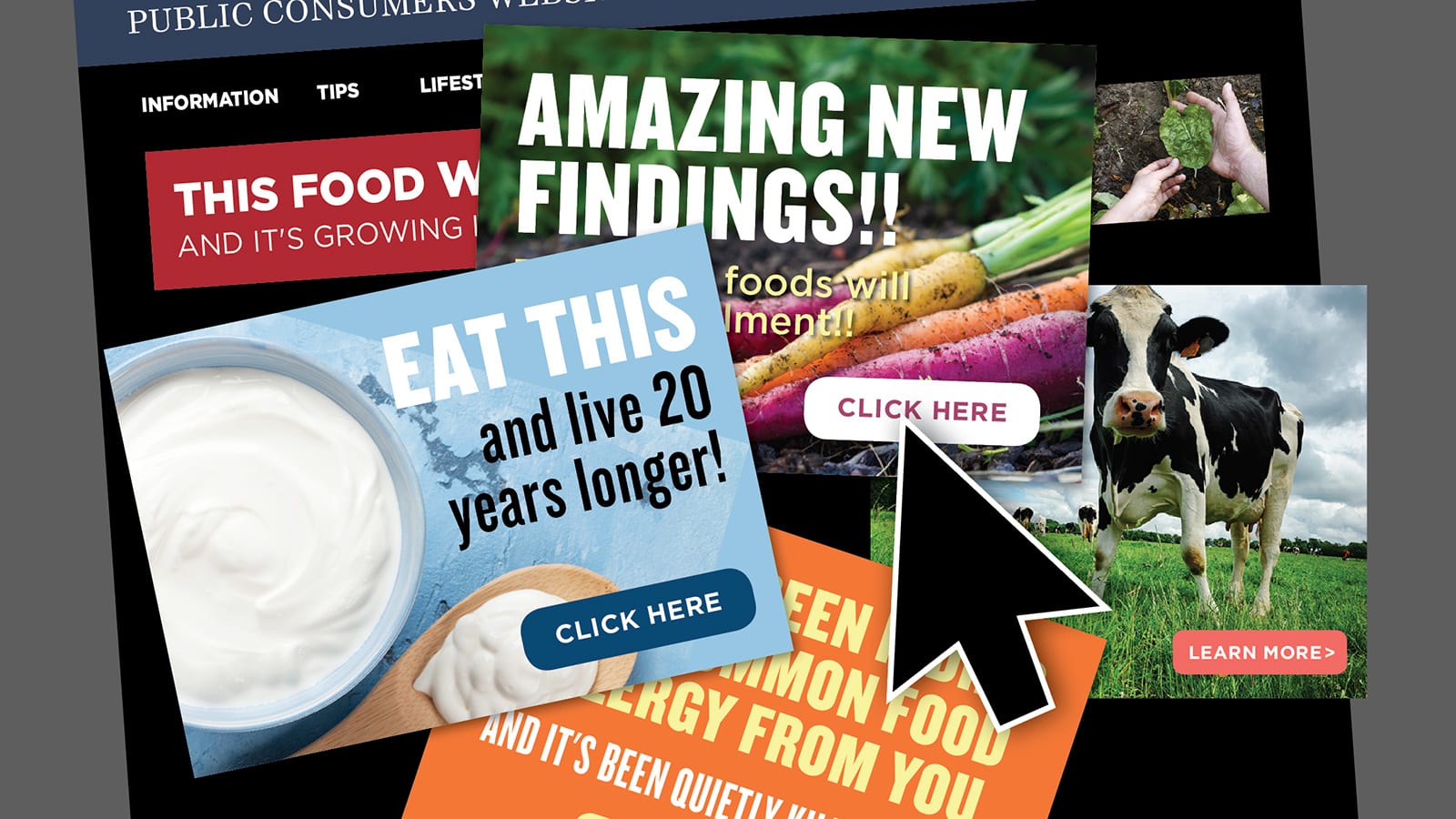 Nutrition research is fashionable fodder for clickbait these days, using enticing headlines, such as “good news for coffee drinkers,” or by challenging the nutritional wisdom of the day, assuring us that “butter is back.” This media coverage helps spread awareness about ongoing nutrition research but also generates a constant stream of conflicting headlines that can confuse today’s health-conscious consumers.

Are you paying extra attention to what you’re eating this holiday season? Planning a New Year’s diet? Do yourself a favor — keep calm and don’t change your diet until you’ve read beyond the headlines.

A 2017 survey found that the vast majority (78 percent) of Americans experience conflicting information about what foods to eat. Most Americans want to eat healthier but are confused about what foods are legitimately healthy. One source of this nutritional confusion is the media’s love of incendiary headlines, fueled by a flawed interpretation of nutrition science.

Clickbait is a term for web content that uses controversial headlines to drive content to a website. Usually, there’s just enough information to make readers curious enough to “click” on the link — and the more controversial the headline, the more people get “baited” to visit the website. Don’t fall for the bait!

There are hundreds of nutrition studies published each week, but only a handful of these are flashy enough to draw headline-chasing media coverage. When a new study confirms existing nutrition data, it won’t get the media coverage that a more controversial study receives.

This publication bias contributes to public confusion about what to eat. When the headlines constantly present new controversies instead of reinforcing conventional wisdom about what is healthy, consumers begin to believe the nutrition community can’t figure anything out.

If you’re like most consumers, you probably just want to know, “Is it good for me, or not?” Nutrition is a complex science, however, and doesn’t fit easily into compact headlines.

When reporters try to reduce a new study to a clickbait headline, important information gets lost in translation. This was evident in media coverage of a 2015 World Health Organization (WHO) report about processed meat and cancer.

The WHO report declared processed meat (bacon, hot dogs) a Group 1 carcinogen (carcinogenic to humans) because of strong evidence linking processed meat consumption to colorectal cancer. Some headlines erroneously declared “Bacon now as harmful as tobacco,” leading to a fury of follow-up reports attempting to re-explain that bacon was nowhere near as harmful as tobacco. Group 1 designation meant that the level of evidence was strong, but the level of risk to the general population was nowhere near as harmful.

Unfortunately, the public doesn’t always track these follow-up reports and some remember only the headlines and trending hashtags before moving on to the next nutritional controversy.

Correlation is not causation

A 2017 study examining the association between fried potatoes and mortality was fodder for big headlines, such as “French fries could kill you,” terrifying the potato-loving public (potatoes are the most popular vegetable consumed in the U.S.). But this study was only an observational study, not an experimental study, and thus was not able to prove causation.

French fries are typically served alongside hamburgers, hot dogs and other high-sodium processed meats wrapped in refined grains (buns, bread) and washed down with sweetened sodas. It’s entirely possible that fries don’t cause health problems but that these other related behaviors were the reason for the observed correlation.

The vast majority of human nutrition data is based on observational studies where researchers ask people what they eat and then track them over time to find out whether or not they develop chronic diseases. Observational research is fairly easy to conduct and can capture data from a large population, but it cannot prove causation.

A single study never proves anything itself. Instead, it must be considered in relation to the totality of evidence. Headline-chasing reporters notoriously make sweeping claims about studies that the researchers are unlikely to make themselves. Only when the results from observational studies, animal studies, and experimental trials all point to the same conclusion can we finally determine causation.

One of the most important questions to ask of nutrition research is: how is it funded?

Food and agriculture industry groups routinely fund research, academic institutions and public health groups, such as the American Heart Association and the Academy of Nutrition and Dietetics.

A 2017 paper in the Journal of the American Medical Association titled “The Misuse of Meta-analysis in Nutrition Research” stated that the “food industry is well aware of the power of science-driven headlines,” and that food industries frequently sponsor researchers to re-evaluate existing data. Not surprisingly, the funding source can be “significantly related to study conclusions.”

The food industry’s deep pockets have had a massive impact on nutrition research and dietary guidelines. The sugar industry’s work to shift public attention from sugar to fat spans nearly 70 years. The National Dairy Council continuously funds researchers exploring the health benefits of dairy foods. The Mars Center for Cocoa Research also has funded more than 150 studies promoting the health properties of chocolate.

Just because a study is funded by a specific industry doesn’t mean necessarily that the research should be discredited, but it certainly deserves attention and is cause for a closer examination of the study.

If you read only headlines, you miss out on key information to help you understand the research behind the headlines. Was the research conducted in humans or animals? Was it a new study or a review of earlier studies?

Clickbait headlines bring attention to the evolving science of nutrition, but reporters aren’t necessarily experts in evaluating research studies. Scientific studies are published in academic peer-reviewed journals not generally read by the public. Each new study adds to our existing knowledge base, but it must be evaluated in context with all the available data. Newspapers and popular journals, on the other hand, are free to generalize about a study – and they frequently do so, in order to generate more clicks, or to promote their own agenda.

It’s challenging to study something as personal as food choices and, believe it or not, nutrition is a relatively young science. Each year our understanding evolves and improves as we learn more about the complex relationships between foods, nutrients and health.

There is a lot of great information about nutrition available online, but there is also a lot of information from less credible and biased sources. In this era of “fake news” and clickbait headlines, it is essential to know how to evaluate the credibility of what you are reading.

Nick Rose, M.S., is a nutrition educator at PCC Community Markets, offering classes for staff and the public on a range of topics. Browse upcoming classes or register here.

Letters to the editor, December 2017

The season of giving

However you celebrate, this is the season of giving and we have a number of gift options to help you share the joy of this holiday season.