The fight for animal welfare

This article was originally published in November 2017 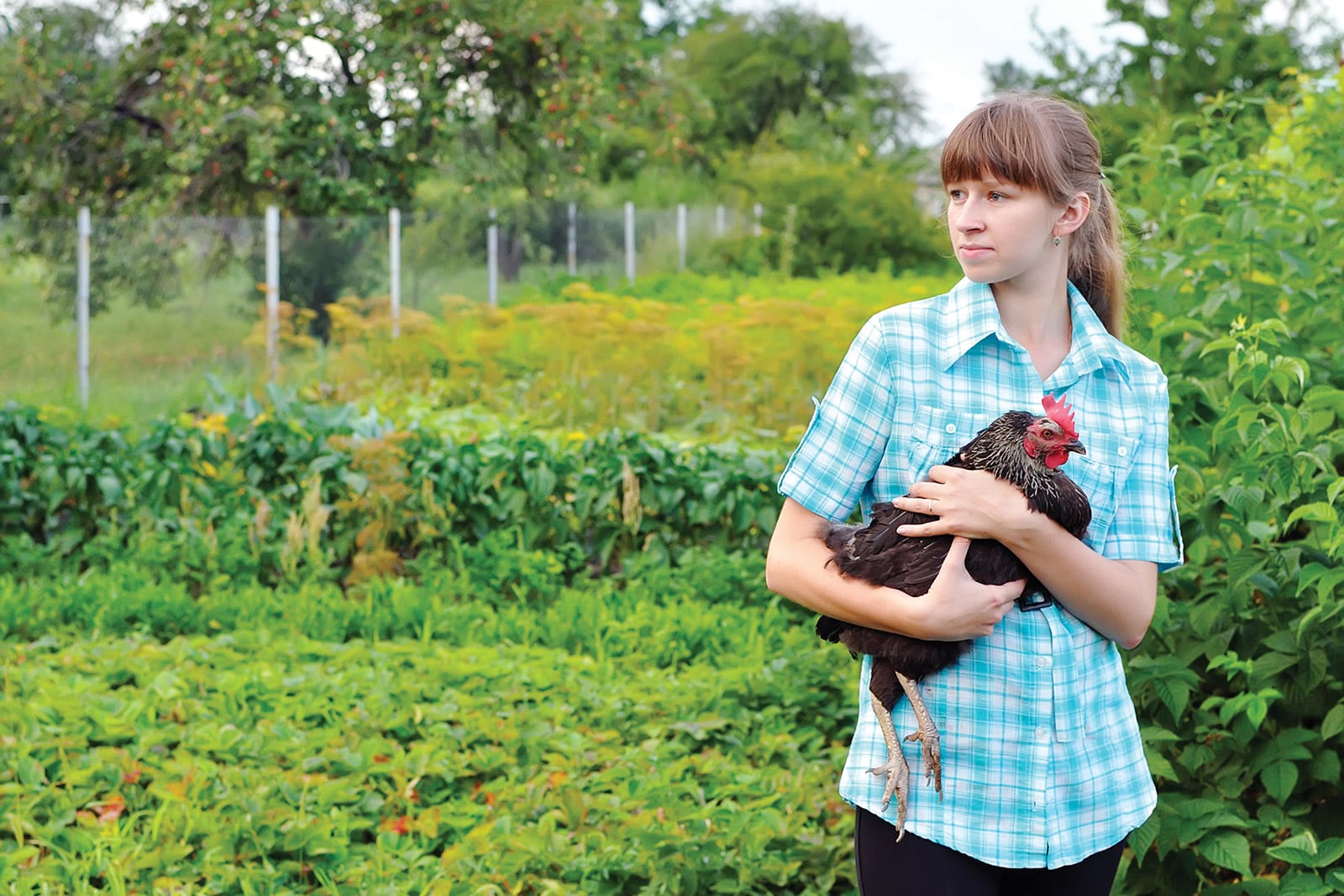 While vegetarians and omnivores gather around holiday tables this month, one thing we all seem to agree on is the need for strong animal welfare standards.

By November 14, we’ll know whether the U.S. Department of Agriculture (USDA) will allow updated rules for organic animals to take effect, or whether USDA will modify or even revoke the rules.

The new organic animal welfare rule took a decade to hammer out and aims to close some troubling loopholes. Especially in the organic chicken industry, it contains a list of provisions, clarifying language to better ensure more humane treatment of animals. Fixing loopholes and raising the bar matters to PCC and anyone who cares about how animals are treated.

The rule finally was published on January 19, one day before President Trump’s inauguration.

Organic consumers, small and mid-size farmers, and retailers believed we finally had achieved an important goal.

Instead, the next day, January 20, the administration froze all new and pending regulations, including the Organic Livestock and Poultry Practices rule. USDA delayed the date for implementation — twice — arguing “there are significant policy and legal issues … that warrant further review.”

A couple of industrial egg and poultry producers had been complaining to Senators on the Agriculture Committee, Pat Roberts (R-Kansas) and Debbie Stabenow (D-Michigan), who repeatedly have challenged the animal welfare rule. According to Civil Eats, Roberts and Stabenow also have threatened appropriations riders to defund it. The process has turned into a chicken fight, literally.

In May, USDA reopened the rule for comment, requesting input on whether the rule should be enacted November 14, or delayed again, modified or even revoked.

PCC commented that further delaying the rule disrespects the legal process put in place by Congress 27 years ago with the Organic Food Production Act (OFPA) and that changing the rule now to placate two industrial egg farms and other non-organic groups that do not meet the spirit or letter of the standards would insult the due process mandated by OFPA.

The Organic Trade Association filed a lawsuit on September 13 against USDA for delaying the rule. The Secretary of Agriculture, Sonny Perdue, is expected to make a final decision about the status of the rule on November 14.

The animal welfare rule originally was supposed to take effect last March and would cover all animal products certified under the National Organic Program (NOP). It clarifies requirements for living space indoors and out and addresses ammonia levels, stress reduction, and physical alterations.

But the fight over implementation boils down, primarily, to whether the regulations will force egg and poultry operations to allow hens real access outdoors to soil, vegetation and sunlight. The new rule clarifies that producers must “provide animals with daily access to the outdoors and that outdoor areas include vegetation and/or soil.”

Small, screened-in cement floor porches with a roof blocking direct sunlight no longer could be interpreted by some certifiers as acceptable. Some observers say these porches used by a couple of industrial egg producers are so small that no more than 2 percent of a flock can crowd into them at any given time.

Cal-Maine Foods Inc., of Jackson, Mississippi, is the largest egg producer in the world with more than 36 million hens and 2015 net sales of $1.576 billion. Herbruck’s Poultry Ranch in Saranac, Michigan, is ranked 13th in egg production in the U.S. and claims it produces 60 percent of the state’s eggs. The Washington Post reported in July that Herbruck’s houses its certified organic chickens “at three [hens] per square foot” on metal shelves stacked 20-feet high in “aviaries.” The hens, the Post observed, are allowed no outdoor access.

PCC will not sell eggs from such producers. Instead, PCC merchandiser Scott Owen has built a network of local family egg producers that pasture their hens. “PCC recognized the need to raise the bar for humane egg production, so we brought on pastured organic eggs from Misty Meadows Farms in 2011. Since then, we’ve added eight other small producers of pastured eggs. This is the direction we need to go.”

Melissa Moeller of Misty Meadows explained that their chickens are rotated outside on grass all year long, and that calling access to small concrete porches outdoors does a disservice to chickens and eaters. “Our chickens get to be chickens and we won’t compromise — even if it’s harder. I just can’t imagine it any other way.”

Laura Batcha, executive director of the Organic Trade Association (OTA), stated in a September 13 press release that OTA’s board voted unanimously to sue USDA. “We are standing up on behalf of the entire organic sector to protect organic integrity, advance animal welfare, and demand the government keep up with the industry and the consumer in setting organic standards.”

Youngblood, of NOC, says, “The overwhelming majority of organic producers meet or exceed the new rules and won’t be directly affected if and when the new rule is implemented. But, some organic poultry producers will not be able to comply — without changing how they raise hens. The new standards help level the playing field.”

She points out that the delays put conscientious organic farmers at risk. “All the farmers that already adhere to these standards are taking a hit. They’re being undercut by the few producers who are cutting corners.”

John Glisson, vice president of research for the U.S. Poultry and Egg Association, which opposes implementation of the animal welfare rule, says his group submitted its arguments against the rule during the comment period.

Glisson says, “Our concern is that over the last 70 years, the poultry industry has learned the hard way that you can’t manage diseases when you keep animals outside. Some diseases are catastrophic and they come from … wild birds, avian influenza in particular.”

Industry leaders point to the outbreak of avian influenza in 2014-2015 that brought about the destruction of approximately 50 million birds, resulting in losses estimated at $1.6 billion.

The literature, however, shows the 2015 outbreak was concentrated in large, indoor concentrated animal feeding operations (CAFOs) — not on farms with birds outdoors. USDA reportedly determined there were 10 times more cases of bird flu detected in commercial operations than backyard flocks during the 2015 outbreak. The former U.S. Chief Veterinary Officer Dr. John Clifford testified before a Senate committee hearing that transmission of the virus is not affected by whether birds are indoors or out.

Research also shows that confining thousands of hens in dense living conditions indoors can speed the rate of pathogenic mutations and are more often the source of virulent strains of avian flu; milder strains are more likely to mutate into more virulent ones in crowded indoor conditions. The Avian flu virus does not easily survive sunlight.

Researchers in the February 2007 edition of Environmental Health Perspectives concluded that the increase in CAFOs and dosing animals with antibiotics increased public health risks.

“The industrialization of livestock production,” they said, “and the widespread use of nontherapeutic antimicrobial growth promotants has intensified the risk for the emergence of new, more virulent, or more resistant microorganisms.”

“[The] most significant change in the evolution of the influenza virus is the rapid growth of the CAFOs on a global scale,” report researchers in the March 2016 journal Infection, Genetics and Evolution.

Cameron Harsh, senior manager for Animal and Organic Policy at the Center for Food Safety, says the “sickly wild bird” argument doesn’t hold up to science. Harsh explains, “The form of avian influenza carried by most wild birds has low pathogenicity. It’s more likely to spread and develop into a more virulent strain in birds that are cooped up in high densities. Access outdoors is part of the solution because it reduces density.”

How this battle will settle is anybody’s guess. The regulatory landscape is changing.

On September 2, the Trump administration nominated Gregory Ibach, a lifelong cow-calf producer and Kansas’ agriculture director, to oversee USDA agricultural marketing and regulatory programs. If confirmed, Ibach’s duties would include oversight of the NOP.

The deputy administrator of the NOP, Miles McEvoy, resigned on September 11. McEvoy said he had been considering his resignation for several years and wanted to spend more time with his family and birding back home in Olympia, Washington.

The OTA lawsuit was filed two days after McEvoy’s resignation.

According to USDA, we’ll know the agency’s decision by November 14. This decision will shape the future for organic producers and consumers.

New shelf tags and how to read them

PCC's new shelf tags have a different look. But rest assured we've kept many of the same easy-to-shop features from our last tags.

Letters to the editor, November 2017

The co-owner of a Massachusetts bakery says he'll comply with a Food and Drug Administration (FDA) order to remove "love" from the list of ingredients in its granola but disagrees and doesn't really understand why he has to.