This article was originally published in June 2017

The surprising health benefits of cooking food over fire 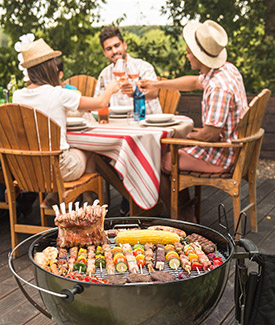 “Grilling, broiling, barbecuing — whatever you want to call it — is an art, not just a matter of building a pyre and throwing on a piece of meat as a sacrifice to the gods of the stomach.”

One of the rituals of summertime is to clean out the grill and get it ready for the season. Grilling food outdoors is a great way to bring family and friends together around food, and potentially can offer a number of unique health benefits.

One of the obvious health benefits of grilling is that you’re spending time outdoors and therefore making vitamin D from the sunlight. We all need a good 30 minutes of sun exposure each day to boost our supply of the sunshine vitamin and this can be accomplished easily by relaxing on the patio waiting for dinner to marinate, cook and enjoy.

Mushrooms are unique in their ability to make vitamin D from sunlight and luckily they’re also delicious on the grill. You can “fortify” mushrooms with vitamin D by slicing them and then placing them in the direct sunlight for an hour. Mushrooms can produce your entire Daily Value for vitamin D by simply sitting in the sun while you prep the grill.

One of the biggest health concerns with frequent grilling is the known carcinogens formed in all grilled meats. But this doesn’t mean you shouldn’t ever eat grilled meat because you can significantly reduce the formation of carcinogenic compounds called heterocyclic amines (HCAs) by marinating your meat with antioxidant-rich herbs and spices. When meats are exposed to high heat (such as through grilling), a reaction transforms the proteins into HCAs, which you see as the black grill marks on the meat. HCAs (and also polycyclic aromatic hydrocarbons (PAHs) found in smoked meats) are probable carcinogens and should be avoided as much as possible.

Many herbs and spices contain antioxidants that prevent proteins from transforming into HCAs. Several recent studies have found that when meat is marinated for at least 30 minutes in a mixture of high-antioxidant herbs and spices, the levels of HCAs are reduced by 60 to 99 percent. Researchers have found rosemary, oregano, thyme, basil, garlic, marjoram, mint, sage, savory and turmeric all have the benefit of reducing the formation of these compounds in grilled meats.

Try to use about ½ cup of marinade per pound of raw meat and remember that longer marinating times lead to more protection — and more flavor in the food!

Avoid sugar-based marinades because sugar reacts with the proteins in meat, increasing the formation of HCAs, while vinegar and other acids reduce the formation.

Well-done meats also have higher levels of HCAs, so in addition to marinating your meat, it’s best to avoid prolonged cooking times (while ensuring food safety by cooking to a safe medium temperature). It’s best to cook over lower heat if possible.

What about grilled vegetables?

Vegetables do not produce the HCAs found in grilled meats because vegetables and fruits lack the creatinine (protein) found in all meats. So the grill marks you see on your veggies is an indication of flavor, not carcinogens. In addition to mushrooms, there are many summer vegetables that taste great on the grill: asparagus, zucchini, eggplant and peppers are among the best.

Many fruits also are delicious when grilled, including pineapple, tomatoes, peaches, watermelon and fresh figs. View the recipe for grilled avocados on page 5, which can be filled with salsa, or other summer fixings.

In addition to the nutritional benefits of grilling outside, you also can reap a number of health benefits from spending time outdoors. Many people report that cooking outside over a flame connects them to their ancestral roots and is a nice break from cooking in the kitchen, especially on a hot day when you don’t want to turn on the oven.

We’re now learning that spending time outside in nature might improve our blood pressure, reduce our stress levels, boost the immune system and even reduce inflammation. Some mental health experts believe that Nature Deficit Disorder might be a factor influencing many people’s overall health.

So next time you’re invited to or hosting a barbeque, just prepare your favorite herb-packed, low-sugar marinade, some of the delicious organic, non-GMO meat on sale this month at PCC, a variety of colorful veggies, and enjoy the many health benefits of grilling and chilling outdoors!

Nick Rose, M.S., is a nutrition educator at PCC.

PCC Board of Trustees report, June 2017

2017 Board Election, 2017 Annual Members' Business Meeting, Board report, and more

Do we need to double food production?

The United Nations projects that the global population will increase from 7.3 billion in 2015 to 9.7 billion in 2050. This growth will be concentrated in the world's poorest countries, where standards of living are set to rise rapidly, increasing demand for resource-intensive meat and dairy products. Together, these trends are heightening fears that the world's cupboards may run bare in the coming decades.