Getting flame retardants out of the food supply

This article was originally published in April 2017 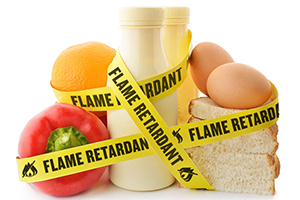 PCC relies on some outside organizations to do work for which we don’t have capacity or expertise. Toxic-Free Future is one partner that led the successful fight for a law that bans five flame retardants from textiles, car seats and toys that also contaminate the environment and food supply.

When we think about toxic chemicals in food, pesticides probably come to mind. After all, they’re sprayed intentionally on food crops. Flame retardant chemicals, on the other hand, shouldn’t be used anywhere near farms. So why are they showing up in butter, lettuce and meat? Is organic food a safer choice?

Toxic flame retardants have a surprising capacity for escaping from furniture, insulation, electronics and other products in which they are used, and winding up in unexpected places. Over the last several decades, these chemicals — linked to cancer, harm to brain development, and reproductive problems — quietly have become some of the most significant pollutants in our environments, especially in indoor air and house dust.

People can reduce flame retardant exposure by purchasing furniture and textiles free of flame retardants, minimizing household dust and handwashing. But for the food we eat, it’s tougher to opt out.

Unlike pesticides, there’s no ongoing governmental testing of food for flame retardants. We do have some information from independent research, which has found persistent toxic flame retardants in food.

How are these chemicals getting into food? As with other persistent chemicals, such as dioxin and PCBs, some flame retardants build up in animals including livestock and fish. Some persistent toxic flame retardants, including PBDEs, have largely been phased out after our pioneering and subsequent regulatory actions in Washington state.

In addition, recent research has raised concern that the use of “reclaimed” water (aka wastewater effluent) on fields and in orchards may lead to contamination of food with flame retardants. Government agencies do not routinely test for them in surface water or wastewater, but the limited research available has found surprisingly high levels of these flame retardants in wastewater treatment plant effluent. One of the places this effluent turns up is on the farm.

Toxic-Free Future’s own research found that flame retardants hitchhike on clothing, getting into laundry water that makes its way to wastewater treatment plants and, in most cases, eventually rivers and Puget Sound. Some of the new-generation flame retardants are highly soluble in water and are particularly efficient at making their way through treatment unchanged.

Now, research from the Colorado School of Mines has found that food crops are able to take up these highly soluble flame retardants. One study concluded that consumption of food grown in reclaimed water could be a significant source of exposure to Tris flame retardants.

U.S. Department of Agriculture (USDA) organic regulations don’t explicitly speak to types of reclaimed or recycled water allowed for use in organic production. According to Scott Rice of Washington’s organic program, “it’s the responsibility of the certified operation to ensure that certified land, crops, and products not come into contact with prohibited substances.” But, since the scientific understanding of crop uptake of chemicals in reclaimed water still is nascent, the issue may not be on the radar for most growers.

There’s much we don’t know about the presence of these chemicals in the food supply. But we do know enough to guide us toward regulatory actions that would limit their use where possible.

The Washington State Legislature passed the Toxic-Free Kids and Families Act in 2016, restricting five flame retardants in furniture and children’s products and assessing six others. Toxic-Free Future and our partners in the Toxic-Free Legacy Coalition led this fight against a well-funded chemical industry in Olympia. We continue to press for policies that replace toxic flame retardants with safer materials and chemicals. You’ll see the results of our work in your food!

Erika Schreder, M.S., is the science director of Toxic-Free Future.

Learn about projects in the pipeline, the environmental and social impacts of aquaculture, and ways you can take action.