Seed industry consolidation continues. So should our resistance.

This article was originally published in February 2017 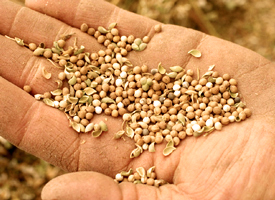 The seed industry is one of the most consolidated in agriculture — and it’s getting worse.

Bayer announced in September a merger agreement with Monsanto, which will create the world’s largest supplier in seeds and agricultural chemicals. DuPont and Dow, and ChemChina and Syngenta, also announced agreements to merge. If the Department of Justice (DOJ) allows these three megamergers to move forward, three corporations will own nearly 60 percent of the world’s seed supply. This level of concentration has grave impacts for agriculture, including the organic sector.

History shows us that consolidation in the seed industry leads to fewer choices for all farmers, regardless of what they grow and how they grow it. When it comes to the needs of organic farmers, they’re already underserved because the dominant players invest only in seed technologies and chemical production systems that are in conflict with organic farming practices and principles.

These companies also aggressively protect their intellectual property rights on seeds, which means less access to important germplasm and less innovation. Intellectual property rights held by the dominant companies typically are fiercely protected through restrictions on how seed is used and exchanged, including research purposes and seed saving that benefits organic agriculture.

Farmers already were operating within a highly consolidated seed marketplace — even before the announcement of these megamergers — and have been for quite some time. Between 2008 and 2013, there were more than 70 seed company acquisitions by the top eight firms. Three companies (Monsanto, DuPont and Syngenta) already collectively control more than half the commercial seed market, according to Dr. Philip Howard of Michigan State University, who documents and studies consolidation in food and agricultural markets.

When you look at specific crop markets, the level of consolidation is even more extreme. For example, Monsanto and DuPont control more than 60 percent of the retail market for corn and soybeans alone, and Monsanto is the industry leader in vegetable seed sales as well. Increasingly, a handful of multinational companies control much of the seed supply across crop types.

A threat to biodiversity

“The changes in the seed industry since 1984, when we began farming, has been one of dramatic consolidation and monopolistic control,” Theresa explains. “This has struck a devastating blow to the biodiversity of our food and agriculture system, drastically eroding and narrowing both the diversity of species in our agricultural landscape and the genetic diversity within those species.”

The petitions delivered to DOJ speak to this ongoing threat and warn of less innovation, diversity and resiliency in our seed supply, leaving farmers with fewer options and higher costs.

“But these challenges also present an opportunity — and as a seed steward, an imperative — to act,” Theresa adds. “We must take the seed in hand and create alternative systems that provide for ecological, political and economic access to biodiverse and elastic seed systems capable of adapting to a changing climate.”

We all need to speak up in opposition to these mergers while simultaneously working to support policies and programs that expand seed choices for farmers, especially as we head into the next Farm Bill.

The dominant seed system is driven by the profit motives of chemical and biotechnology companies that leverage intellectual property rights to their advantage, discouraging farmers from participating in research and seed saving. They put shareholder interests before those of the greater public. Here’s how we can counter that.

We need to keep speaking up against seed mergers by contacting our members of Congress, the Department of Justice, and our state attorneys general. Tell them that increased consolidation in the seed industry will hurt farmers and the communities they feed.

Remember that the organic community has an opportunity to create a much different path for organic seed. Vote with your dollar — choose organic seed and organic food! Buy organic seeds at Organic Seed Finder (organicseedfinder.org), Pick A Carrot (pickacarrot.com) and SeedWise (seedwise.com).

Read the “State of Organic Seed” report outlining our roadmap for developing organic seed in a way that avoids the negative trends seen in the nonorganic sector (stateoforganicseed.org).

Kiki Hubbard is director of advocacy and communications for the Organic Seed Alliance.

Organic Valley is transitioning to carrageenan-free foods, Oregon's Coho salmon are facing threats, and President Obama prohibited future oil and gas development in parts of the Arctic and Atlantic Oceans before leaving office. Hear all the details, plus more current food and agriculture reports.

New, experimental genetic engineering techniques are altering food and other products while racing ahead of regulations. What are the consequences and will they be allowed in organics?