Two nut producers are growing organic almonds and organic, fair trade cashews for PCC — while driving change in their communities. By purchasing these nuts, we can help accelerate their good work.

As a member-owned cooperative, PCC values doing business with other cooperatives. Our mission and goals align and often we share a triple-bottom-line commitment to people, profits and the planet.

In this month when you may be scattering nuts across a cheese platter, or baking biscotti for gifts, consider using Equal Exchange’s organic almonds and cashews. You’ll be helping to make sure the farmers who grew them are equitably treated and fairly compensated, and the benefits will ripple through their communities and beyond.

Together — each person, each co-op — is working to develop a strong marketplace for organic and fair trade foods. What a great way to get in the holiday spirit!

You haven’t tasted cashews until you’ve tasted Equal Exchange’s Central American cashews. They’re larger than most, with a crackling crunch and a mild, sweet flavor that’s anything but bland. When we at PCC first tasted them a few years ago, the bag disappeared within minutes.

But the exceptional taste is just one reason we love these nuts. They’re grown by a farmer cooperative called APRAINORES in El Salvador that’s leading the way to creating more organic farms in the area and is helping to shield the community against environmental disasters, such as flooding.

Equal Exchange has donated money for APRAINORES to create a Revolving Loan Fund (RLF), administered by a committee of board members. The idea of the RLF is to make small, short-term loans to farmer-members of the co-op that they then repay after they turn in the next year’s harvest.

“This Revolving Loan Fund is extremely important to the farmers and helps the co-op collect more cashews during harvest,” says Equal Exchange’s Phyllis Robinson. “More cashews means more income for the farmers and more working capital for the co-op.”

APRAINORES has been plagued by climate change and other difficulties. 2016 was the first year the co-op started out in great condition, thanks in large part to the support from Equal Exchange and partner co-ops. But then APRAINORES was hit again by a series of disasters.

“Ocean tides swept up higher than ever before, as the tides are beginning to do in coastal areas all around the world,” says Robinson. “APRAINORES lost 25 (out of approximately 180) 2.25-acre ‘manzanas’ of cashew trees. The co-op lost cashews and three or four farmers whose land was affected lost their income not just for this year, but for the foreseeable future. Once the soil is salinated the trees die and there’s no point in replanting.”

Next, Robinson says, drought struck just as the trees were flowering, then rain washed most of the flowers off the tree and rotted the nuts. “A cashew scarcity caused the price of cashews on the local market to skyrocket as the smugglers went wild offering high prices for anything they could get their hands on,” says Robinson. “APRAINORES said they might not have any cashews for Equal Exchange this year. The meager quantity could fetch a higher price on the local market than they would get processing and exporting to Equal Exchange.”

Just under 100 women depend on the plant for their livelihoods and closing it would leave them all without work. It also would discourage the farmers and send a worrisome signal to buyers who had lent them money.

“In the end, we were able to work out an arrangement,” says Robinson. The processing plant stayed open and Equal Exchange was shipped a container of cashews — in PCC bulk departments now.

APRAINORES farmers’ resilience has made them leaders in their community. Even the local government is tapping the farmers’ knowledge and industriousness for a special new project that will strengthen the local community.

APRAINORES farms are along the Lempa River in an area of El Salvador called Bajo Lempa where there are two hydroelectric dams. Every year the government energy company, CEL, decides when to open the floodgates and release water. Almost every year for decades, the communities along the river are flooded.

“There are always photos showing people trying to cross the roads with water up to their necks, carrying one or two precious items on their heads, animals floating down the river, people standing on the roofs waiting to be rescued, etc.,” says Robinson. “Homes and crops are destroyed routinely and people disappear or are displaced or killed as they try to find shelter in area churches.”

But now CEL has decided to invest $3 million over three years to plant cacao and cashew trees on the banks of the river to help restore the banks and mitigate flooding.

CEL has asked APRAINORES, as the only organized cashew co-op in the area, to implement the project and provide technical assistance and trees to increase organic cashew production.

“APRAINORES farmers are delighted to lead the project and be considered the organic experts in the area,” says APRAINORES’ general manager, Alex Flores. The co-op just planted 50 new manzanas of land and will be adding 50 new members to their current 65. Next year, the co-op plans to plant another 50-100 manzanas and eventually welcome another 100 or so farmers into the co-op. Current farmers also have received additional trees and organic matter for fertilizers.

As a shopper, your purchase matters. Money that APRAINORES received from Equal Exchange and co-ops, including PCC — a total of $50,000 — went to hire technical assistance and grow out 5,000 trees that now are being given to the farmers. 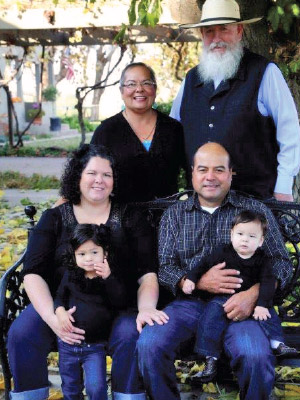 Rose Marie and Ward Burroughs, and Benina and Heriberto Montes and their children.

Three thousand miles up the Pacific coast from APRAINORES, a fifth-generation family farm in Denair, California, also is bringing about change by growing nuts. But instead of cashews, the Burroughs family is growing some of the tastiest organic almonds anywhere.

“Our customers constantly tell us our almonds are the best they’ve ever had,” says Rose Marie Burroughs, who grows the almonds with her husband, Ward, and daughter, Benina Montes.

Equal Exchange has sourced almonds from the Burroughs for a decade and, over the past five years, encouraged the family to transition a large amount of almond acreage from conventional to organic. In the transition period, organic growing methods are used for three consecutive years while the product can be sold only as conventional. This means farmers incur extra expense and work by using organic methods but don’t benefit through a price premium for three years.

“Plus, production initially goes down, sometimes as much as 50 percent,” says Ward. One reason is that organic almond farmers can’t use synthetic chemicals to fight fungus, a problem for growers in the Burroughs’ region of California. Rose Marie adds, “When farmers have been poisoning the land with chemicals in conventional farming, it takes a while for it to rebuild and acclimate when it’s finally farmed organically.”

So it takes a real commitment to the organic mission to make the leap. “Our family aims to produce the cleanest and most delicious foods in ways that protect and enhance the soil, air, water and the environment,” says Benina. It’s why the transition to organic was so important to the family. “We work hard to use all resources wisely and to integrate all aspects of our farming operations.”

Equal Exchange and partners, such as PCC, made the transition easier for the Burroughs by paying more than conventional market prices during the farm’s three-year transition period. PCC started purchasing transitional almonds in 2012 and purchased 55,825 pounds during the transition. Now, we’re happy to carry the newly certified organic almonds — you’ll find them in bulk!

A steady source of wonderful organic almonds for us at PCC is just one of the benefits of the Burroughs’ new organic status.

The Burroughs turned that pattern of pesticide use into an opportunity and it’s paying off. The farm’s ecology has improved so much that Rose Marie says, “We’ve seen many more varieties of birds on our farm since going organic — more every year.”

The Burroughs’ good work has earned international attention from people interested in the importance of supporting organic family farms and that’s helping propel the good food movement. People from as far away as Japan and Brazil, including school kids of all ages, have gone to visit the farm. “We want everyone, including our fellow farmers, to know that organic is a learning process and we want to provide a positive example and support,” says Rose Marie. “As a generational farming family, we have the responsibility of stewarding the land sustainably and sharing how we do it.”

For all that they’ve accomplished in building a thriving organic farm, the Burroughs humbly thank shoppers who choose their almonds over cheaper foreign imports. They say, “It’s so easy for people to look for the cheapest price but that’s not the best for our health, the environment, or the future of family farms.”

Tips to reduce sugar in baking

Sugar can be reduced by about a third without seeing many negative consequences, although the difference will be noticeable. Learn when it's ok to cut sugar, special notes and exceptions, sugar substitutes, and how sugar affects moisture, shelf life, crispness and other qualities.