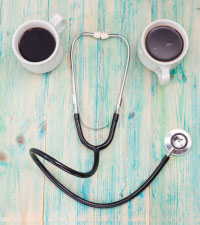 Let’s raise a glass to…coffee? That’s right. With more antioxidants than red wine and green tea, coffee just might be the most healthful drink at the table.

Coffee once was thought to cause harm, but more than a decade of studies have poured in reporting health benefits in the bitter brew, indicating it may help fight disorders from cardiovascular disease to depression. Here’s a look at some recent findings.

A coffee a day keeps the doctor away?

The new 2015 U.S. Dietary Guidelines say “moderate coffee consumption is not associated with an increased risk of major chronic diseases (e.g., cancer) or premature death, especially from … cardiovascular disease.” The committee whose recommendations formed the guidelines concluded that drinking three to five cups a day was associated with minimal health risks and may confer benefits. Decaf or regular doesn’t seem to matter.

Harvard researchers recently reported in the journal Circulation an association between drinking three to five cups a day and lower mortality. Both caffeinated and decaffeinated coffee drinkers saw benefits.

Another Harvard analysis in 2013 of 36 studies covering more than a million people found that even heavy coffee consumption did not increase the risk of cardiovascular disease and that three to five cups of coffee daily provided the most protection against cardiovascular disease. This year British researchers found drinking at least one coffee a day could be the secret to survival after a heart attack — patients who drank one to two cups a day were 20 percent less likely to die prematurely from heart damage than those who never drank coffee.

But it’s not just longevity and physical health but mental health and quality of life that may be improved. A 2011 Harvard study that tracked 50,000 women for 10 years found that those who drank four or more cups of caffeinated coffee per day were 20 percent less likely to develop depression than nondrinkers. The researchers speculate that long-term coffee drinking may boost the production of “feel good” hormones, such as dopamine.

The health perks make sense: Coffee reportedly is the number-one source of antioxidants in the U.S. diet — not just because it’s high in antioxidants, but because Americans drink so much of it.

“It’s one thing to say it’s safe,” Dr. Rob van Dam, an adjunct associate professor of nutrition and epidemiology at Harvard University, told The New York Times. “It’s another thing to recommend it as a medical choice even though people don’t like it and they’d have to make an effort to adopt it. We’d need a different level of evidence to recommend it to people.”

For those who do like coffee, “Unless it makes you too jittery, I don’t have a problem with it,” says Bastyr University naturopathic doctor, Matt Brignall. But he and other doctors advise moderate coffee consumption. “Don’t overdo it,” Brignall says. “Enjoy it on a cold day.”

Coffee isn’t recommended for children or for people with bladder infections because of coffee’s acidity. Unfiltered coffee, such as French Press or espresso, according to some studies, causes cholesterol to rise.

Everyone’s coffee and caffeine tolerances are different. If coffee upsets your stomach or keeps you awake, it may not be the drink for you.

One solution for disrupting sleep is to drink coffee earlier in the day, or switch to decaf. Made with a filter, black or with a little milk and no sugar, is the best choice.

PCC Board of Trustees report, October 2016

Apply to be a Trustee with PCC Natural Markets, Get to know your trustees, Next Board Meeting, and more