This article was originally published in August 2016 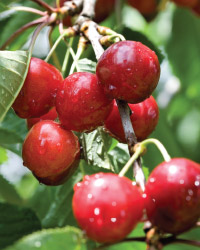 The Dead Zone that plagues the Gulf of Mexico is now about 6,800 square miles, 29 percent larger than before. The cause is near-record farm pollution in the Mississippi River. The latest Mississippi River water quality measurements demonstrate that spending $46 billion since 1997 to encourage farmers to reduce farm pollution voluntarily simply has not worked. Buffer acres, cover crops and better fertilizer management together reportedly could reduce farm runoff by 30 percent.

The 2016 season was a “vintage year” for Washington cherries — although the crop wasn’t record-breaking in size, growers were pleased with fruit size, firmness, beauty and flavor.

The first commercial crop of GE Golden Delicious apples will hit the market this fall, about when the first GE Granny Smith apples will be planted, while a third GE apple — the Fuji — awaits approval. All are being grown in Washington state. A number of major food companies, including Wendy’s, McDonald’s and Gerber, said last fall they don’t plan to sell GE apples.

Russia has passed a total ban on the cultivation and breeding of GE crops and animals. It follows a declaration by Russian President Putin last winter that Russia should become the world’s largest supplier of organic foods.

Environmentalists are demanding that Pacific Bluefin tuna be listed as an endangered species. The Pacific bluefin tuna has been depleted to less than 3 percent of its estimated unfished levels.

Washington led the nation in blueberry production this summer, for the second year in a row. About 115 million pounds were shipped. Washington growers have increased organic and conventional production on 13,000 acres, including 2,500 acres of organic. The new plantings are of high-yielding varieties planted in higher densities, with highly efficient drip irrigation.

Facial skin needs extra care, so we might think cosmetics would be especially gentle. Makeup, however, is one of the worst offenders when it comes to ingredients. Choose natural makeup and men's skin care products for the same reason you choose organic food.

Letters to the editor, August 2016

Recycling vs. composting, Sound Consumer archives, Organic is key to help feed the world, and more

Will carrageenan remain in organic food?

Carrageenan, a thickener used in many foods, is considered a "synthetic substance" due to its extraction process. It must be reviewed by the National Organic Standards Board every five years. Research demonstrates carrageenan's role in inflammation, colitis, cancer and diabetes.