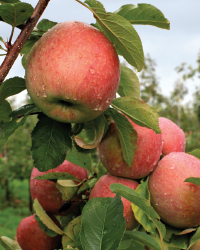 Washington’s 2015 fresh apple crop bounced back up in total volume and sales, and prices were good. The crop was pegged at 118.5 million 40-pound boxes as of December, up from previous forecasts but well below the record 2014 crop of 141.8 million boxes. Red Delicious, which tops the list of Washington varieties, was down 13 million boxes from 43 million in 2014, but that’s good in the long run for greater varietal diversity.

Close to 60,000 jobs are set to open up in agriculture, food and natural resource sectors each year for the next five years, according to a report from Purdue University and the U.S. Department of Agriculture (USDA). But there aren’t enough grads to fill them. That has left USDA, land grant universities and private industry scrambling to bridge the gap.

Oyster farmers and activists are joining to attempt to block a liquefied natural gas pipeline on the Oregon coast. Since oysters are filter feeders, they could die if they ingest water with silt the pipeline could dredge up.

Walnuts have 21 percent fewer calories than previously thought, according to USDA scientists. They found a 28-gram serving actually contains 146 calories, not the 185 calories currently assigned by USDA. They previously found that the number of calories in almonds was 20 percent less and 5 percent less for pistachios. The discrepancy could be attributed to evolving methods for calculating calories in foods. Calories listed for tree nuts on labels are based on methods developed in the early 1900s.

Has your diet changed?

Has your diet changed much over the years? We'd like to understand how personal dietary choices have evolved and would value your input. Let us know!

At least 10 USDA scientists have been investigated or faced other consequences arising from research that called into question the safety of agricultural chemicals.