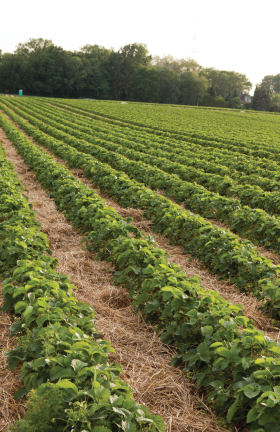 Strawberry acreage in California has declined 11 percent in the past two years. The decline may be related to the dwindling water supply, coupled with the Environmental Protection Agency’s suggestion that farmers will have to stop using the toxic, ozone-depleting fumigant methyl bromide after 2016.

USDA designated 18 counties in Washington as Primary Natural Disaster areas due to damage and losses caused by drought, making farmers and food-related businesses eligible to apply for low-interest loans to help recover.

California’s drought continues to distress farmers. Many almond growers have been forced to use groundwater on the thirsty crop, but groundwater is high in salt, which kills almond trees. Some of the state’s farmers are switching from water-intensive crops to drought-tolerant crops such as grapes, pomegranates and dragonfruit.

USDA is allowing a pork retailer, for the first time, to label products as raised with “no ractopamine.” It may lead to pressure on farmers to stop using the muscle-promoting drug.

The olive oil industry is in trouble. World output is expected to fall by a third to 2.3 million tons this year, its lowest level since 2000. The shortfall is due to arid weather in Spain, the world’s biggest producer, and a bacterial disease ravaging olive trees in Italy. Production in those countries has fallen by around 50 percent. The bacterium is a risk to more than just olive groves in the Mediterranean. Around 300 plant species are vulnerable and it previously has devastated citrus-fruit trees in Brazil and vineyards in California.

The toxic algae bloom stretching thousands of miles from Southern California to Alaska’s Aleutian Islands is the longest-lasting, densest and most toxic bloom scientists have seen. It has resulted in the closure of a Washington razor clam fishery ($9.2 million in lost income) and also has damaged the state’s $84 million commercial crabbing industry.

October is Non-GMO Month and Fair Trade Month, two good reasons to remember the value of an informed choice in what we eat.

It has long been known vitamin D is essential for building strong bones, but recent studies reveal it plays a critical role throughout our bodies, affecting everything from movement and weight to mental health and cognition.

Letters to the editor, October 2015