This article was originally published in September 2015 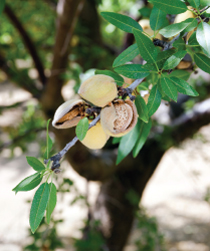 Americans are eating more almonds than ever and the consumption spike — coupled with smaller crops due to California’s drought — has sent prices surging to record levels. The U.S. crop is down 7 percent this year and expected to be even smaller next year. Almonds are the highest-valued U.S. tree-nut crop, worth about $6.46 billion this year — more than apples and strawberries combined.

Washington State University researchers may test a robotic apple picker this fall. A successful system could alleviate labor shortages and save growers a lot in labor costs.

World food prices reached an almost six-year low in July, as costs for meat, dairy, cereals, oils and sugar were down 21 percent from the same time last year. Meanwhile, consumer food prices in the United States are increasing faster than for other goods and services, with year-over-year advances averaging 2.4 percent since the start of 2015.

More than 160,000 salmon, mostly juvenile Chinook, were transferred from a fish hatchery in central Oregon to one in the Columbia River Gorge as a last-ditch effort to save them from increasingly warm waters. Biologists say trucking adds stress to the already weakened fish.

Shrimp from Louisiana now is considered a sustainable choice and no longer is on the red “avoid” list. Shrimpers in Louisiana now are required to use devices called TEDs that help prevent turtles from being trapped in shrimp nets. Louisiana recently overturned a law that made it the only state to prohibit compliance with federal regulations requiring TEDs.

Letters to the editor, September 2015