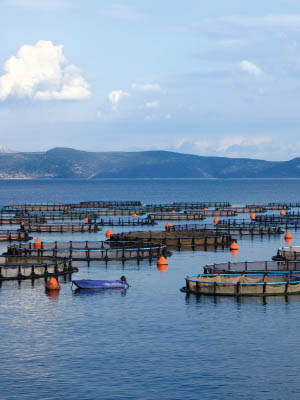 The U.S. Department of Agriculture’s (USDA) National Organic Program is set to release draft standards this summer that would allow fish farmed in the open ocean to be certified organic.

PCC Natural Markets, along with environmental and consumer groups around the country, believe this plan violates organic standards and should be stopped.

There are four major problems with the proposed organic aquaculture standard.

First, producing fish in nets and cages in the open ocean contributes to the degradation of the world’s seas, marine life and ecosystems. These cramped facilities — akin to industrial animal factories on land — can be an enormous source of waste pollution, including feces, uneaten feed and synthetic chemicals.

Third, the proposed organic standard would have farmed fish be fed non-organic wild fish while all other livestock are required to have 100-percent organic feed. Allowing wild-caught fish and byproducts in feed would increase pressure on already overexploited or recovering fisheries, threatening their survival.

Finally, farming migratory fish never can be organic because confinement impedes migratory fish from expressing their natural behaviors, which violates a key tenet of organic farming. Some fish, such as salmon, instinctually swim thousands of miles between fresh and salt water to spawn in their birth rivers, a behavior not possible when contained.

More than 54,000 people have submitted comments to the National Organic Standards Board (NOSB) opposing these provisions in the proposed regulations.

Despite widespread public opposition, the NOSB has supported the flawed proposal, based upon the findings of organic aquaculture workgroups dominated by the conventional aquaculture industry.

Appointed by USDA, the large majority of participants in the workgroups for more than a decade have had a vested interest in expanding their business into organic. Their reports and recommendations consistently have minimized the ecological and human health impacts associated with ocean-based fish farming that have been raised repeatedly as issues of great concern by the public.

Sign a petition to USDA saying open-ocean fish farms should not be certified organic.

USDA has not heeded the public’s call to forgo ocean-based fish farms and instead is capitulating to conventional fish farming interests. How can we turn this around?

We can tell USDA that the standards need to be clarified and strengthened.

The organic community, including PCC and Center for Food Safety, do not feel organic standards are incompatible with all aquaculture models. Since 2006, a substantial number of public comments have supported greater research into the potential of land-based, closed-loop, recirculating systems to raise certain fish species as certified organic. Fifty-three fisheries-based, farmer, environmental, and consumer organizations, with millions of supporters nationwide, have endorsed a position statement agreeing that land-based systems have the potential to meet Organic Foods Protection Act criteria.

The draft aquaculture regulations must be released for public review and comment, by law. This means we have a final opportunity to oppose provisions that allow ocean-based aquaculture to be certified organic. Please take a moment to contact USDA when the draft regulations are released.

To stay updated, opt in to PCC Advocates and Center for Food Safety’s True Food Network. Feel free to use CFS’ factsheet on the impacts of ocean-based fish farming for your comments.

To allow organic certification of fish grown in farms that pollute the ocean in so many ways would breach consumer trust in the integrity of organically grown food and the organic label.

If you enjoy reading about food and sustainability, consider some recommendations from a thought leader in the sustainable food movement.