This article was originally published in March 2015 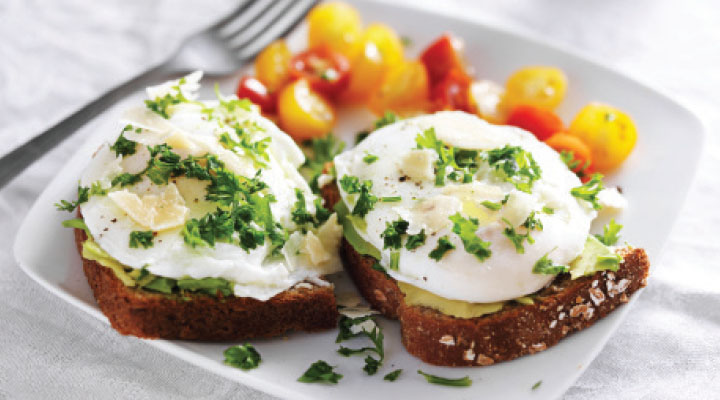 Mood can be influenced by many factors, from a walk with a friend to a good book. The nutrients in food also may impact our frame of mind.

Maintaining mental health is a complicated labyrinth with hallways of environmental stress, corners of family disappointments, or an open space sunlit by success. Perhaps our ability to handle these situations can be buoyed by what we eat. No one claims a change in diet to be a panacea for psychological stability. Still, nutrition is an important factor in emotional well-being.

There are many concrete measures for physical health, from blood pressure to lab work. Mental health is more difficult to define. When talking about mood improvement, people often express a desire to be more energized, more alert and have better recall, as well as to find relief from depression and anxiety.

According to Hippocrates, “Men ought to know that from nothing else but the brain come joys, delights, laughter and sports, and sorrows, griefs, despondency, and lamentations.” Perhaps feeding the brain healthy food does influence behaviors from attentiveness to melancholy.

Evaluate diet as a whole

An undernourished brain is a cranky brain, prone to memory lapses, cravings and moodiness. Food is fuel and the brain is an energy glutton.

It’s best to start our days with a healthy breakfast, preferably within an hour of waking. By giving our bodies and brains a breakfast of protein, complex carbohydrates and good fat, we might avoid the mood swings that accompany hunger and blood sugar fluctuations. Eating a good breakfast is touted by researchers to improve mood, memory and calmness. A protein-rich breakfast may increase dopamine, a neurotransmitter believed to support mental acuity. (See healthy breakfast recipes.)

Adding green tea to a morning routine adds more antioxidants than some individual servings of fruits or vegetables. Plus studies have shown that green tea increases neurotransmitters, such as serotonin, dopamine and GABA. A cup of green tea contains 97 mg of L-theanine, a relaxant, and 40 mg of caffeine, which contributes to alertness. This potent combination supports mood in a simple, warming cup of your favorite green tea.

A New Zealand study elaborated on this idea when scientists found that on days young adults ate more fruits and vegetables, they reported an enhanced sense of curiosity and creativity. A daily diet high in fruits and vegetables certainly will provide the antioxidants, vitamins and minerals needed to improve your mood.

When on an anti-inflammatory diet, include specific nutrients and foods to boost your mood. B vitamins have a busy role in the body. They break down proteins, release energy from carbohydrates for the brain and nervous system, and are needed for normal brain function and the conduction of nerve signals. The duties of B vitamins anchor the needs of the body to create a positive mood.

B vitamins can be found in leafy greens, whole grains and nuts. Because of the necessity of B vitamins to protect against anxiety and depression, supplement companies often combine B vitamins into a formula to aid in stress reduction. B vitamins have a team mentality and, if choosing to supplement with individual B vitamins, they will be better absorbed in the company of other B vitamins.

Folate is a standout for the workings of the brain. A deficiency in folate lowers the metabolism of important mood neurotransmitters. Two hundred micrograms of folate, found in one cup of spinach or orange juice, has been shown to relieve depression. A deficiency of B-6 may cause confusion, depression or irritability. Avocado, banana, beans, nuts and whole grains are B-6 stars. B-12 maintains the central nervous system and often increases energy. Since the best foods to get B-12 are meat, shellfish, dairy and eggs, vegans may need to supplement to maintain B-12 levels.

Choline is a precursor to acetylcholine, the most prevalent neurotransmitter in the body, crucial for learning, sleep and motor function. Lower acetylcholine has been linked to Alzheimer’s and depression. Look to eggs, turkey, salmon, lean meat, tofu, mushrooms, whey and cocoa as good sources of choline.

Vitamin D regulates neurotransmitters, helps maintain cognitive functioning and may lessen depression. Such mood busters as premenstrual syndrome and seasonal affective disorder have been linked to low vitamin D levels. In studies of older adults, vitamin D deficiency has been associated with active mood disorder. A German study with 206 healthy volunteers discovered a correlation between increased vitamin D and openness, agreeableness and conscientiousness. In the sun-deprived Northwest, find vitamin D in seafood, mushrooms and supplements.

Studies have found that a deficiency in selenium is linked to anxiety, irritability, depression and decreased cognition. Selenium’s function in the brain is unclear, but when the body is deficient in selenium, the brain is the last place where selenium levels drop. It seems the brain holds on to selenium because it needs it. Selenium is known to support the thyroid (having the blues can be a symptom of hypothyroidism) and protect fatty acids in cell membranes from oxidation. Sources of selenium are nuts, especially Brazil nuts, as well as pork, cod, tuna, mushrooms and whole grains.

If we are what we eat, it’s much healthier to have a brain with omega-3s than a potato chip brain. Omega-3s, the essential fatty acids that the body cannot create, play an important role in mood stability. DHA is the omega-3 making up about 20 to 30 percent of the brain. It’s critical for neuronal signaling. The U.S. military through the Department of Defense published a study associating increased levels of DHA to a significant decrease in veterans’ suicide risk. DHA also supported better recovery from traumatic brain injury.

The omega-3 EPA supports the anti-inflammatory pathways in the body, buttressing mood protection in an anti-inflammatory diet. Salmon and other fatty fish provide fully formed DHA and EPA. ALA, omega-3s from plant sources, can be converted to DHA and EPA by a healthy body.

The gastrointestinal tract has been called the body’s second brain. The gut has its own independent nervous system and is the location of hundreds of neurochemicals the brain needs to regulate mental processes such as learning and mood. (This gives new meaning to “I had a gut feeling.”)

Microflora, the live bacteria known as probiotics, are essential to the health of the GI tract as well as the manufacture of neurotransmitters. In fact, with 50 percent of the immune system residing in the G.I. tract, the health of the entire body is modulated by the complex array of flora there.

“I do believe that our gut microbes affect what goes on in our brains,” said Dr. Emeran Mayer, co-founder of the UCLA Collaborative Centers for Integrative Medicine. This research is in the early stages and includes MRIs to link microflora with brain activity and behavior changes.

What parent hasn’t seen evidence of how the brain influences the gut when a child has an upset stomach before a test? Now scientists see the interaction between the GI tract and the brain as a two-way highway, where bacteria may be directing the brain.

Researchers believe that gut flora use neurotransmitters, such as serotonin, to send messages to the brain. Dr. Mark Lyte at Texas Tech University Health Sciences Center saw neurochemicals not described before being produced by certain bacteria. “Bacteria in effect are mind-altering microorganisms,” he says.

Early microbiome studies were done with mice. In one study, researchers described two groups of mice; one was “garrulous and risk-taking,” the other shy and anxious. The microflora of the two groups were switched and their behaviors reversed. Later studies revealed that adding a single bacterial strain changes mouse behavior. In human studies, probiotics lowered anxiety.

Adding probiotics to our diet is as easy as adding yogurt, kefir, sauerkraut, kimchee (aka kimchi) or other fermented foods. Many flavors of kombucha drinks also are available.

Besides increasing probiotics in our diets, recognize what decreases the colony of good bacteria: antibiotics, stress, illness, GI tract inflammation and too much alcohol. That may be one reason physicians recommend probiotic supplements when the immune system is compromised.

Be kind to those helpful allies in the gut. Feed them the fiber they need, from fruits, vegetables and especially the fiber inulin found in such foods as sunchokes, bananas, onions and garlic.

There’s no single factor for becoming happier. But a healthy diet may be just the foundation needed for building more emotional satisfaction.

Marilyn Walls, M.S., is a nutrition educator at PCC.

Raw-milk cheese, Gluten-free in the deli?, Robots in the milking parlor, and more