This article was originally published in July 2014

Since the dawn of agriculture some 5,000 to 12,000 years ago, humans have been choosing to grow sweeter, less fibrous, and usually less nutritious varieties of fruits and vegetables — essentially breeding nutrients out of food.

Starting with the very first gardens, our farming ancestors chose to cultivate the wild plants that were the most pleasurable to eat. The plants generally were high in sugar, starch or oil. Plants that were bitter, tough, thick-skinned, dry, devoid of sugar, or too seedy were left behind in the wilderness.

We now know that one of the consequences of cultivating the sweetest and mildest-tasting wild plants was a dramatic loss in plant-based nutrients, or phytonutrients.

In her book, “Eating on the Wild Side,” researcher and journalist Jo Robinson doesn’t argue we should go back to foraging like our hunter-gatherer ancestors. Rather, she concludes that the key to optimum health lies in choosing commonly available, nutrient-rich varieties of fruits and vegetables, then storing, handling and preparing them in ways that retain or boost their nutritional value.

Robinson sifted through more than 6,000 scientific studies from around the world. She found that research published within the past 15 years shows that much of our modern produce is relatively low in phytonutrients, which have the potential to reduce the risk of cancer, cardiovascular disease, diabetes and dementia.

The decline has been evolving for thousands of years. “By the time of the Roman Empire,” she writes, “250 generations of farmers already had played a role in reshaping the human diet. The differences between wild plants and our man-made varieties had, even then, become marked. The roots of domesticated beets, carrots and parsnips were twice as large as the roots of their wild ancestors, and they contained less protein, more sugar, and more starch.”

Robinson hardly expects most Americans to start feasting on seedy, berry-sized apples or other often bitter and stringy wild plants. What she does suggest is that we buy or raise varieties that are closest to their wild ancestors in phytonutrient content.

Surprisingly, Robinson’s research found the fruit and vegetable varieties that proved to be the most nutritious overall were a near-equal mix of heirloom and modern varieties. Darker, more colorful produce wasn’t necessarily superior to lighter varieties.

“In fact,” she says, “I’ve interviewed USDA plant breeders who have spent a decade or more developing a new variety of pear or carrot without once measuring its nutritional content.”

The scope of Robinson’s work is difficult to critique. Even health professionals and food scientists are unaware of specific findings she references. Some findings are backed by multiple studies, but others have not been replicated.

Nonetheless, her basic conclusions appear to be sound, says a local dietician.

“She brings out a lot of good, positive points in nutrition,” says Judy Simon, a clinical dietician at the University of Washington Medical Center who also teaches at UW.

Among Robinson’s more startling findings is how simple handling and preparation choices affect nutrient content. She found studies that showed: 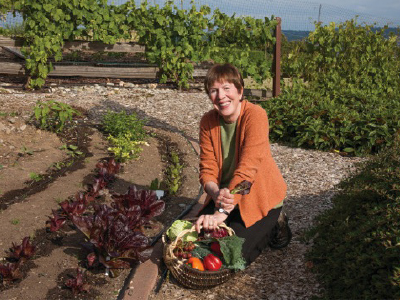 Journalist and researcher Jo Robinson in her Vashon Island garden.

Consumers who grow their own fruits and vegetables or are concerned about making careful choices may be heartened by one factor in nutrient levels that favors small, local farms: freshness.

“Freshness is far more important than anyone realizes for the health benefits of fruits and vegetables,” she says.

As soon as produce is harvested, the nutrients start to disappear. Longer transit and storage times diminish flavor, sometimes causing a more bitter or acidic taste.

PCC’s primary produce purveyor, Organically Grown Company (OGC), qualifies that by saying good and proper storage and transit practices — even for produce from far away — will keep produce fresher than a poorly refrigerated truck from a short distance away. OGC uses state-of-the-art equipment and practices.

Produce is sourced locally and from around the world, says head produce buyer Joe Hardiman. Produce from California usually takes two or three days from field to store, while local produce generally is in stores within 24 hours of harvest.

“But very perishable items, like local strawberries, are brought in the same day,” Hardiman says.

In her tidy, half-acre garden on Vashon Island, Robinson surrounds herself with highly nutritious but mostly obscure fruits and vegetables, all coddled collector’s items here — black tomatoes, a French peach with purple flesh, a berry historically favored by Native Americans that “tastes kind of like toothpaste.”

She suggests that gardeners who are interested in nutrient-rich varieties like these can grow them from specially sourced seed, available from companies such as Territorial Seed and Raintree Nursery.

“I want people to know that even though we have been breeding out the medicine in our foods, there are still great varieties you can find in the supermarket,” says Robinson.

“You don’t have to have a garden. You just need to know what varieties you’re looking for.”

PCC has sent a letter of protest to the Secretary of Agriculture about significant changes to the voting process for the "sunset" of synthetics in the National Organic Program (NOP).