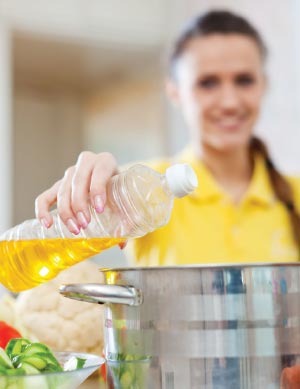 Canola is a member of the brassica family of plants, a “cousin” of broccoli, kale, cabbage, mustard and wasabi. The tiny seeds can be pressed into a yellow oil, then further refined into a neutral-tasting, economical cooking oil with a high “smoke point” good for high-heat cooking.The fatty acids in canola oil are primarily oleic acid, the same heart-healthy monounsaturated fat found in olive oil (and most nuts) — making canola oil a cheaper alternative to extra virgin olive oil.

Also, because canola can be heated to 450° F without oxidizing, it’s much more versatile than olive oil, which is best used raw or in low- to medium-heat cooking. When oils are heated to their smoke point they lose any potential health benefits and become harmful to consume.Canola oil also contains a good dose of essential fatty acids. Canola provides an ideal 2:1 ratio of omega-6 to omega-3 fats. Providing both omega 3s and oleic acid, it’s easy to call canola a heart-healthy cooking oil.

Those in the anti-canola camp argue canola should be avoided because it’s genetically engineered (GE) and processed with toxic solvents and heat, which produce harmful products in the oil. They also claim canola is a toxic hybrid of rapeseed, and that both rapeseed and canola contain erucic acid, a fatty acid that harms the heart. It is true that more than 90 percent of today’s canola is produced through genetic engineering, but organic and non-GE are available.

Canola is a rapeseed hybrid, but it was produced through traditional breeding, not genetic engineering. Rapeseed was very high in erucic acid (30 to 60 percent); today’s canola contains less than 2 percent.

Good, bad or both?

We often want to place a simple “good for you” or “bad for you” label on foods, but making an informed decision on canola requires some label-reading wisdom. For instance, most canola is genetically engineered and heat extracted, but none of the canola oil sold at PCC is GE or extracted with heat or solvents (see table).Corn, soy, cottonseed and anything labeled “vegetable oil” are just as often GE, and also solvent-extracted and heat-treated. They just don’t inspire the same concern as canola.

The only thing that is different about canola is its erucic acid content. Erucic acid is a suspected culprit in the progression of cardiovascular diseases, but canola is not the only dietary source of this controversial fatty acid. Some seafood and meats, and all seeds (and sprouts) in the brassica family, provide traces of this and other very similar long-chain monounsaturated fatty acids. Mustard seeds actually contain more erucic acid than canola, yet no one ever refers to wholegrain, spicy mustard as a toxic condiment.

A bigger question is whether liquid “vegetable oils,” such as canola, are any healthier than solid fats such as coconut oil. For more information, see our brochure “Choosing a culinary oil” or the article “The truth about fats” (Sound Consumer, October 2010) to consider the alternatives. Both are available on our website.

The emerging field of epigenetics tells us our genes are influenced by diet and environment.