This article was originally published in October 2013 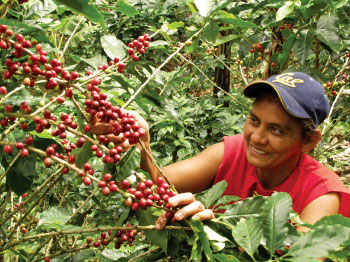 The new symbol is a bold step forward for the people for whom the fair trade movement was built. It reflects how farmers now are taking a leadership role in shaping their own destiny and attempting to ensure a more just system for fellow farmers around the world. The potential impact this new system will have on small farmers, their cooperative organizations, and the entire Fair Trade movement is profound.

In the early 1980s, a division occurred in the fair trade movement. The early founders of fair trade recognized that small farmers and their co-ops were operating on an unfair playing field. This group wanted to create a system that could right the wrongs of hundreds of years of colonialism and unjust trade. Another group was more focused on maximizing the sales of certified fair trade products — period.

Once the certification system was underway, that second group succeeded in opening the system to some crops from large plantations. Plantations have one owner (versus being owned collectively by a democratically run, small-farmer organization) and generally have more access to resources, so it’s usually faster and easier for them to move products from the country of origin to market.

Eventually, the international fair trade certifying system, Fairtrade Labelling Organization, allowed plantations to become a source for almost all fair trade products, with the exception of coffee, cacao and a few other categories. Ever since then, small-farmer coffee and cacao organizations have been living in fear the fair trade system one day will grant plantations access to their categories as well.

If this happens, many believe they again will become marginalized and lose the hard-won market gains that fair trade had made possible. After all, if it’s easier to source coffee and cacao from plantations and still label it “fair trade,” why wouldn’t corporations simply take this easier route?

It took 15 years of Fair Trade to alter substantially the global coffee industry and create meaningful access for co-ops. Unfortunately the option to label plantation-grown tea and bananas as “Fair Trade” has stunted the growth of co-ops in these categories. Coffee farmers don’t want to suffer the same fate.

Small farmers, roasters and other fair trade activists were outraged when the CEO of Transfair USA (now Fair Trade USA) lobbied in 2003 for a change in standards. Paul Rice claimed large companies and corporations wanted access to plantation products and that there wasn’t enough small-farmer fair trade coffee on the market, which wasn’t true. Most farmer co-ops had far more coffee than they could sell to fair trade buyers.

Eight years later, Fair Trade USA controversially left the international fair trade system that had given it birth. Fair Trade USA quickly announced its new strategy, “Fair Trade for All,” allowing plantations in every category, including coffee and cacao.

“It’s as if they’re driving a car going 70 miles an hour and they have put their foot on the gas pedal,” said co-op leader Santiago Paz, an outspoken critic of Fair Trade USA’s push for plantation-grown coffee. “Now it’s going 90, 100, 120 mph and suddenly the small farmer in the passenger seat is flying out the window. They are so concerned with growing the system, advancing at all costs, that they will only end with the extinction of small farmers.”

Small farmer organizations fed up with Fair Trade USA’s pro-plantation strategy took action. They’d been meeting for 10 years to strategize how to keep fair trade from being stolen out from under them. Finally, they had their solution: the SPP.

Most impressive, SPP is run and governed by the farmers themselves. After decades of the Fair Trade movement being managed by offices thousands of miles away, farmers now are in the driver’s seat.

Phyllis Robinson is education and campaigns manager at Equal Exchange, which sells coffee, tea and chocolate at PCC.

Learn about a juicy new apple variety coming soon, why avocado size is smaller this year, and updates on growing local quinoa and Oregon hazelnuts.

Letters to the editor, October 2013

What ingredients are safe?, Food waste, Pesticide residues, and more

Join PCC and GloryBee Foods in saving the honeybee. Bees not only provide us with honey, but they also pollinate more than one-third of our food crops.