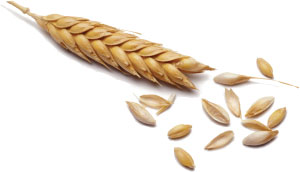 These labels do NOT guarantee that 100-percent whole grains are used: wheat flour, wheat bread, multi-grain, made with whole grain, stone-ground

Eighteen to 30 percent of Americans are avoiding wheat and/or gluten for a variety of reasons. Many people are on the popular “paleo” diet, which forbids all grains. Others have a medical diagnosis requiring them to avoid gluten.

Still others perceive “gluten-free” foods to be healthier choices. With more people than ever avoiding wheat and gluten, it begs the question: what’s wrong with wheat?

A very common misconception is that today’s wheat has been genetically engineered (GE) to produce higher gluten levels, and that modern “Frankenwheat” is the cause of the rise in gluten sensitivities. This is not the case.

Modern wheat does have a higher gluten content than ancient varieties of wheat such as Einkorn, farro and spelt. This lower gluten content explains why home bakers have a difficult time making bread from these ancient grains and/or gluten-free grains.

But there is no GE wheat approved for market. There’s experimental GE wheat in test plots across the U.S. (including a 15-acre permit in Washington) but genetic engineering is not the reason for higher gluten levels in today’s wheat varieties.

Is wheat making us fat?

Cardiologist William Davis’ recent book, “Wheat Belly,” suggests that wheat is addictive, causes us to overeat, and “wheat consumption is the main cause of the obesity and diabetes crisis in the U.S.” The anecdotal evidence cited in his book is not supported by nutrition research, which still supports the benefits of eating whole-grain foods (including whole wheat) for weight maintenance, diabetes risk, and cardiovascular health.

It’s true that refined wheat products contribute to weight gain and diabetes, but “Wheat Belly’s” claims that “wheat make(s) you fat” is not supported by science. Americans may be overeating cookies, muffins, baked goods and wheat-based snacks — but it is not because of the wheat that we overeat.

It’s not the wheat, it’s the way we eat

Wheat accounts for three out of every four servings of grain consumed in the United States and more than 80 percent of our grain intake comes from refined grain foods. Refined wheat flour too often is combined with sugar and poor-quality oils to produce highly palatable foods that offer little nutrition but lots of calories.

Fewer than 2 percent of Americans meet the U.S. Department of Agriculture’s rather conservative recommendation to “make half your grains whole grain.”

When we do choose whole grains, we rely too much on whole-grain flours, rather than selecting intact whole grains such as farro, quinoa and spelt berries. Whole-wheat flour technically is a whole grain, because the bran and germ weren’t removed when milled into flour.

The process of grinding grains into flour, however, raises the glycemic index (GI) — the rate foods are absorbed into the bloodstream. Higher GI-foods can increase food cravings, inflammation and diabetes risk.

Consider this example: whole-grain oats can be ground into a fine powder (instant oats) or simply sliced into smaller pieces (steel-cut). Researchers have demonstrated that an instant oatmeal breakfast increases hunger and the number of calories consumed between breakfast and lunch compared to steel-cut oats.

There are no nutritional drawbacks to gluten-free diets, except the limited options when eating out, traveling, and the many social aspects of eating. If you are considering going gluten-free, keep in mind that you have to be eating gluten in order to be diagnosed with celiac disease or gluten sensitivity by your doctor.

Whether you eat wheat, are gluten-free or are just gluten-curious, we all should strive to diversify our grain intake, avoid refined grains, and incorporate whole, intact grains into our daily diets.

Nick Rose is a nutrition educator at PCC.

Northwest blueberry supply outstrips demand, and Wash. apple farmers may have a hard time finding export markets for millions of boxes of apples. Also: the farm worker shortage continues on Wash. farms, and strong demand from overseas has bumped the value of Northwest pink shrimp.

Washington-grown organic, fresh herbs are still in season! Try them in recipes from this issue of the Sound Consumer, or other dishes with early fall produce.