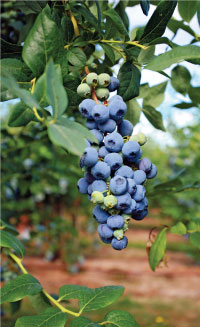 Northwest blueberry growers are worried that a sharp increase in blueberry plantings may mean there will be more supply than demand.

Per-capita blueberry consumption has increased dramatically from less than 1 pound in 2000 to almost 2 pounds in 2009, but growers say demand will have to increase to 3 pounds to keep up with the growing supply.

Weather damage to China’s wheat crop is opening export opportunities for Pacific Northwest wheat growers. China usually grows as much as 95 percent of the wheat it consumes but this year may import 10 percent.

Washington growers had 8.8 percent fewer workers than needed in June, continuing the trend of labor shortages over the past couple of years. Severe labor shortages in the state began in summer 2011.

Washington apple farmers may have a hard time finding export markets for about 11 million boxes of apples this season. It was easier last year, when crops in Mexico, Canada, Europe and the rest of the United States were light, but crops in those areas are expected to return to normal this year. China stopped importing U.S. apples last August, citing post-harvest diseases.

Alaska was forecast to catch about 34 million Sockeye salmon this year, but the numbers aren’t in yet. Strong runs in Cook Inlet and on the Alaska Peninsula were expected to make up for a shortfall in Bristol Bay, which annually is the largest source of sockeye.

Prices for Pacific Northwest pink shrimp are strong this season, due in part to the development of markets in Europe, especially in Sweden and Denmark, where West Coast shrimp has found a niche as a cheaper alternative to Norwegian shrimp.

PCC Board of Trustees report, September 2013

Board meeting report, Message from the nominating committee