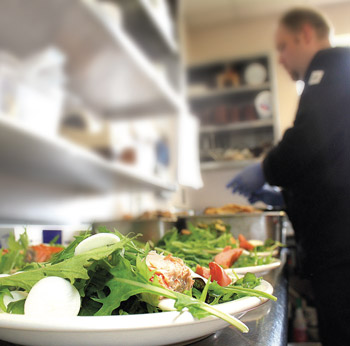 If there’s any cuisine that’s maligned universally, it is hospital food. Mystery meat, yellow jello — the jokes practically make themselves. That is, of course, until we are the patient, or visiting a loved one, and can’t find a lick of humor in the lack of nourishing options on the menu.

A small group of dedicated hospital foodservice staff, clinicians and hospital administrators are trying to change that.

Launched in 2005 by the international non-profit Health Care Without Harm, the Healthy Food in Health Care program began as a way to leverage the purchasing power of healthcare foodservice, which spends more than $5 billion annually on food nationwide. Its goal is to help build markets for sustainable farms and food producers. It also brings the medical voice to regional and national food advocacy efforts.

Harnessing the purchasing power of institutions is a vital step in the transformation the food system needs to become one that promotes health rather than disease. As places of healing, hospitals should be leaders in this transformation.

The average American household spends about $6,000 a year on food, whereas many Seattle-area hospitals spend $2-3 million. If consumers are “voting with their dollars,” these institutions wield a heck of a lot more votes than individuals.

Healthy Food in Health Care asks hospitals to consider the potential impact of those dollars if they were invested in foods that nourish patients and caregivers, protect the environment, and support sustainable agriculture. 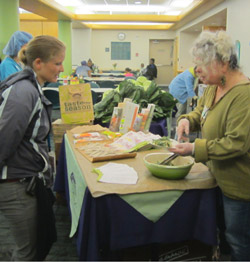 PCC and Children’s Mission Nutrition Program help teach employees and the community at Children’s Hospital about good nutrition and healthy cooking through a series of food demonstrations.

In addition to the free taste test, hospital staff also take home the recipe with a few key ingredients to motivate them to prepare it, and a tip sheet with nutritional information and the “superfood” ingredients it features.

PCC’s nutrition educators are there to answer any questions.

Washington is emerging as a leader in this movement. A 2013 nationwide survey of hospitals engaged in Healthy Food in Health Care found five of the top 10 hospitals being considered for the Sustainable Food Procurement Award, which measures the amount spent on local and sustainably raised foods and beverages, were based in Western Washington.

As of June 2013, 23 Washington hospitals (and 443 nationwide) had signed the Healthy Food in Health Care Pledge, signifying an institutional commitment to serve nutritious, sustainable foods. How hospitals go about actually implementing the pledge is up to them and varies with the size and location of the facility.

“My job is to not create new patients for my hospital,” says Chris Linaman, executive chef and food and beverage manager at Overlake Hospital and Medical Center in Bellevue, which won 2nd place at the 2013 Healthy Food in Health Care awards ceremony for purchasing local and sustainable foods. Overlake’s administration signed the pledge in 2007 and the food and nutrition department has been making steady improvements every year.

UW Medical Center also participates actively in Balanced Menus Challenge, a national effort that asks hospitals to reduce their meat purchasing by 20 percent and invest the cost savings in more sustainably raised meats. “It’s great to be feeding our patients the same type of food we would feed our families,” says Bethany Cook, UW Medical Center’s technology and wellness manager.

Tacoma General Hospital is buying local. “We like to support Washington farmers to help keep them in business,” says Tacoma General’s Pam Thiemann. “The Puyallup Valley farmland is fertile,” she adds, and it’s close to the hospital. Thiemann is seeking meat and poultry suppliers that do not treat their animals with non-therapeutic antibiotics.

Smaller, rural hospitals in Washington have different opportunities because they serve fewer meals. United General Hospital in Sedro-Wooley won second place nationally in 2011 for its sustainable food purchases, highlighted prominently on the hospital’s “Farm Fresh Friday” menu, which features items grown or raised within 50 miles of the hospital during the growing season.

Even in the off-season, Johnson continues his local purchases of foods such as organic ground beef from Skagit River Ranch for the weekly meatloaf, spring mix and spinach from Hedlin Farms or Ralph’s Greenhouse, as well as local carrots, onions and grains. He replaced powdered mashed potatoes with fresh, local potatoes.

“Small changes make a big difference,” Johnson insists. “It’s great to know you’re helping people in your community.” The community noticed, too. “Farm Fresh Fridays” frequently bring in customers who are not there for treatment or to visit loved ones — they just heard it was the best meal in town.

Jefferson Healthcare in Port Townsend also is looking for ways to support local, sustainable farms. When the small hospital hired Chef Arran Stark in 2011, it was a radical departure from the hospital’s status quo, and required a major remodel of the kitchen.

“We went from a reheat kitchen to a space you can cook in,” Stark says. The kitchen had to add additional cook and prep spaces, and train longtime staff members in new techniques. Today, Jefferson Healthcare is buying carrots and grains from Nash’s Organic Produce in Sequim, as well as a sow Stark and his team will use to make their own sausage.

They buy from several smaller local farms, too, including purchases of entire cows from Short’s Family Farm in Chimacum, and are buying bread from a local baker, coffee from a local roaster and cheese from Mount Townsend Creamery. The hospital now boasts the largest salad bar in Jefferson County — nine feet — and makes three soups from scratch each day.

In February, the hospital gave seed money to local farmers in exchange for wholesale vouchers the kitchen is using now to purchase fresh food. Stark describes it as an “institutional CSA” — helping farmers financially when they need it most and guaranteeing them a market during the growing season.

“We’re thinking like culinarians,” Stark says. “We walk to the cooler, see what we have the most of and determine what we are going to make.” Stark dreams of a day when doctors prescribe cooking classes to patients.

“Doctors always say, ‘You need to exercise and eat better,'” he says. “The exercise part is easy — go for a walk. But no one tells people how to cook, and they head for the freezer aisle. People need to cook more, and institutions need to do the same thing.”

It may seem like every hospital in Washington could add fresh, organic whole foods to their menus, but there are many reasons it’s not so easy. These include a lack of preparation space and staff time, to contracts with large national buying groups that demand specific percentages of food and beverages are purchased through them. Sometimes it’s a perceived lack of interest from their customers, or a belief that healthy food won’t sell.

Hospital workers experience an 8.6-percent higher burden of illnesses such as diabetes, congestive heart failure, hypertension and obesity than the general U.S. workforce. Facing a higher rate of diet-related diseases, some hospitals are stepping in to help make healthier options the norm in order to protect employee health and reduce healthcare costs.

Purchasing changes alone will not change the widespread availability and affordability of foods that are good for both people and planet. Policy is another key piece in the transformation of the national food system.

On a national level, healthcare professionals are pushing for policies to restrict the overuse of antibiotics in animal agriculture.

Hospitals and other large purchasers have the power to change the way food is produced and manufactured by holding their suppliers accountable for the downstream health impacts of a heavily industrialized food system. Dollars wielded by hospitals and institutions essentially are an investment strategy. Investing in healthy food systems today pays dividends toward a healthier future.

Katherine Pryor is the Washington Healthy Food in Health Care Program Director for Health Care Without Harm and the author of the children’s book “Sylvia’s Spinach.”

Letters to the editor, August 2013

PCC Board of Trustees report, August 2013

June board meeting report, Scenes from CCMA, Board recruiting ongoing

A new study involving pigs raised on genetically engineered (GE) grain adds to the growing body of evidence that raises questions about the safety of GE foods.