PCC Board of Trustees report, August 2013 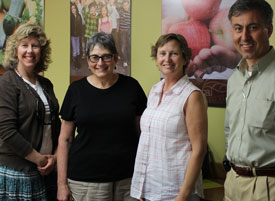 Our new trustees began orientation sessions for their new jobs in June with the incoming board chair Maggie Lucas and outgoing chair Carol Binder. (l-r) Lucas, Karen May, Binder and Taso Lagos.

The final meeting of the 2012-2013 board was held on June 25. The board received year-end reports from all committees — board development, CEO evaluation, finance and member relations. Each committee chair reviewed the past year’s work plans and made recommendations for the next year’s committees.

Katrina Basic’s service was acknowledged with a thank you gift as she completed her three-year term. Basic has relocated out of the state and chose not to apply for re-election.

The board also recognized the service of the late Bryan Pearce. He served on the board for three years and had decided not to apply for re-election due to illness. Sadly, he passed away on April 20.

The 2013-2014 board, including newly elected trustees, John Sheller, Taso Lagos and Karen May, was officially seated. Sheller was elected to his second term.

The board elected Maggie Lucas to serve as chair, and Sheller was elected to represent the board on the 2013-2014 nominating committee. He will be joining Janet Hietter, Tom Monahan, Don Nordness, Mary Simon and Julie Tempest.

The next board meeting is September 24 at 5 p.m. at the co-op office. Members are welcome at all public portions of the meeting, and member comment period is at 7 p.m. 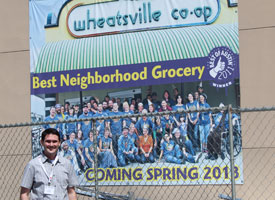 Several PCC board and staff members attended the 2013 Consumer Cooperative Management Association (CCMA) conference in June. They attended workshops over the three-day conference that drew more than 500. The conference was held in Austin, Texas, and the host co-op was Wheatsville Food Co-op.

Wheatsville is celebrating the impending opening of its second store. The PCC group was able to tour both the current and future Wheatsville locations.

“Over the years, we have had discussions related to growth with board members and management from Wheatsville, so it was very exciting to see this new store taking shape,” noted trustee Carol Binder.

The PCC group had informal meetings with several co-ops including Hanover Consumer Cooperative Society in New Hampshire. PCC has a special connection with Hanover since Hanover’s general manager, Terry Appleby, once served as PCC’s general manager.

CCMA is annually a great opportunity to share ideas and experiences with co-ops of all sizes.

PCC members are encouraged to look into board service as a way to contribute to the co-op’s continued success. This Policy Governance board leads through policy development and monitoring management’s progress. Learn more »

The deadline for applications for the 2014 election is mid-October. Contact nominatingcommittee@pccmarkets.com with questions or to request an application.

A new study involving pigs raised on genetically engineered (GE) grain adds to the growing body of evidence that raises questions about the safety of GE foods.