This article was originally published in May 2013

We can calm inflammation by making changes in our diets.

Avoid grain-fed meats and organ meats (such as liver). These are higher in omega-6 fatty acids such as arachidonic acid, or AA, which our bodies can convert directly to pro-inflammatory messengers. Other meats have some AA, but at lower levels, with fatty portions having more than lean, poultry having more than beef or pork, and corn-fed animals having more than grass-fed ones. 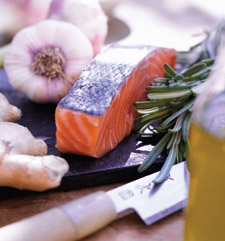 Trans-fatty acids inhibit the production of anti-inflammatory messengers. These fats are found in margarines and vegetable shortenings, commercial baked goods such as crackers and cookies and in other processed foods (not at PCC). They’re found in foods with labels listing “partially hydrogenated oil.”

The best substitute for these fats is olive oil, which is mildly anti-inflammatory. PCC also carries high-oleic varieties of sunflower and safflower oil, which contain the same monounsaturated fatty acids as olive oil but can safely be heated to higher temperatures than extra virgin olive oil. Our delis use a blend of olive oil and high-oleic safflower oil for all deli-made salad dressings.

The American Heart Association offers a strict recommendation of keeping added sugar intake below 5 percent of total calories to prevent inflammation — that’s only 100 calories per day, or less than the sugar content of a 12-ounce can of soda.

Dark-colored fruits and vegetables are particularly healthy, such as red, blue and black berries, cherries and grapes. Onions, garlic and all of the orange and red vegetables such as carrots, cooked tomatoes, squash and sweet potatoes also are good.

Many herbs and spices are potent anti-inflammatories including cinnamon, chives, ginger, turmeric, rosemary, basil and oregano. Green tea also is a proven anti-inflammatory, as well as white tea and oolong.

These foods contain antioxidants, which help dampen the inflammatory response, and/or COX-2 inhibitors, which inhibit the creation of inflammatory messengers.

Discover and avoid foods you may be allergic to.

Food allergies put your immune system in high gear and are themselves a form of inflammation. Plants in the nightshade family, including tomatoes, potatoes, eggplant and peppers, cause an arthritic reaction in some people. Wheat often is a cause of inflammation for people with autoimmune illnesses. (See “Are you sensitive to certain foods?” Sound Consumer, May 2005.)

Fish oil. Taking fish oil is probably the easiest and most effective way to start controlling inflammation. Fish oil is effective for both healthy brains and balanced inflammatory states.

Unfortunately for vegetarians, the omega-3 fats in flax, chia, and hemp seeds and oils are not as potent anti-inflammatory foods as fish and fish oil. Our bodies are much less efficient at processing them into the fatty acids we need.

Borage oil, evening primrose oil or hempseed oil. These contain a fatty acid called GLA (gamma linolenic acid), which our bodies convert into an enzyme that blocks inflammation. Take with food and use only if you also are getting the amount of omega-3-rich fish or fish oil recommended, to ensure the right balance of fatty acids.

Vitamin D. Vitamin D helps prevent and treat most of the ailments already mentioned because it is an anti-inflammatory and helps support a healthy immune system. Vitamin D is abundant in fatty fish such as salmon, tuna and sardines. If we are outside in the summer, our skins can make enough, but in Seattle’s dark winter season, we may need 1,000 to 4,000 IU a day from either diet or a supplement.

This is adapted from an article originally published in the Sound Consumer in 2005, Cooling inflammation with diet.

Squeeze more food from a raindrop?