This article was originally published in December 2012 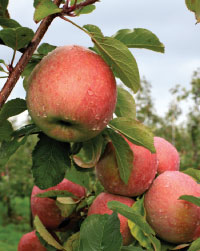 Labor shortage may leave some of Washington’s record-breaking apple crop unpicked. The harvested crop is estimated to total 120 million boxes — far more than the original projection, and breaking the previous record in 2010 of 109.3 million.

Northwest wild mushrooms are in short supply this year. Mushroom experts say an unusually dry summer and fall didn’t set a good crop. Then the rains came just in time to rot those that had emerged.

Some ranchers across the United States reportedly are cutting neighbors’ fences and leaving gates open for their cattle to graze on greener pastures. With drought driving up prices for hay, some ranchers have sold off huge portions of their herds because the worst drought in decades dried up their land and they can’t afford to buy feed.

Popcorn lovers may be seeing a spike in prices because summer drought in the Midwest dried up much of the nation’s crop. Retail prices for a 50-pound bag reportedly have jumped from about $20 to $30 or more. Prices for movie-theater popcorn are unlikely to spike because they’re already high.

As the climate warms, corn production is moving north. Farmers nationwide planted the most corn this year since 1937, but growers in Kansas sowed the fewest acres in three years, instead turning to less-thirsty crops such as wheat, sorghum and triticale. Corn acreage in Manitoba, Canada, about 700 miles north of Kansas, has nearly doubled over the past decade due to weather changes and higher prices.

Drought, animal disease and the rising cost of livestock feed significantly curbed the growth of meat production and consumption in 2011, according to the Worldwatch Institute. Global meat production rose to 297 million tons in 2011, an increase of 0.8 percent over 2010 levels. Meat production has risen 20 percent since 2001.

Thank you, I-522 supporters

With the vote on California's Prop 37 to label genetically engineered foods behind us, we in Washington are in the homestretch of our signature gathering to present I-522 to the legislature in January.

Consider donating to the PCC Food Bank Program and the PCC Farmland Trust for their worthy efforts.

PCC Board of Trustees report, December 2012

Celebrating National Co-op Month and the International Year of the Co-op, Board report, Board meeting, and more