PCC Board of Trustees report, November 2012

This article was originally published in November 2012

(l-r) Nominating committee members Julianne Lamsek, Tom Monahan and Janet Hietter are shown here at the September 25 board meeting. Other members of the committee are Mary Simon and Julie Tempest.

There was no board meeting in October. Look for a report on the October 17 board outreach event, including photos, on our website by November 14 and in the December issue of this paper.

The September 25 board meeting agenda included approval of work plans for the board’s four standing committees and approval of the methodology for the upcoming member survey. The board also reviewed ongoing planning for its February retreat, when the board will begin an in-depth look at our Ends policies.

Board applications were due by October 15. The committee is in the review and interview process this month. The 2013 board candidates will be announced on our website as soon as the slate is set and in the January issue of the Sound Consumer. 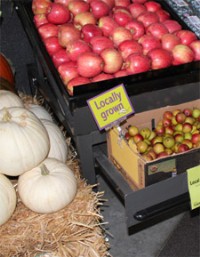 The overwhelming majority of all the new vendors are from Washington.

The next regularly scheduled board meeting will be Tuesday, November 27 at 5 p.m. at the co-op office. Member comment period is at 7 p.m. Comments are limited to three minutes unless a longer presentation is approved by the chair in advance of the meeting.

Management reports to the board each year on its interpretation of our Ends policies and on the actions of the past year that convey its compliance with these guiding policies. This is another in a series of excerpts from the 2012 report on 2011 activities.

See all the Ends policies »

Member survey — Gilmore Research has been retained to conduct the next member survey and will be making calls in early 2013 to randomly selected members. We do hope all will participate.

Interpretation: Management interprets Ends Policy C to mean that PCC’s retail business focuses primarily on the Puget Sound region for its customer base, giving preference to producers, suppliers, community organizations and other partners located in or near our market area.

For the purposes of store locations, “local” is within a reasonable distance of PCC’s current stores and within the Puget Sound (mostly King and Snohomish counties) region. For procurement purposes, “local” is equivalent to “Northwest” and encompasses the states of Washington and Oregon and southern British Columbia. Supporting a “local focus” does not preclude doing business with non-local organizations when doing so better serves our membership and the long-term well being of PCC.

Learn how much the apple industry powers Washington’s economy, what happens to the state’s mint crop, why cherry farmers weren’t happy this year and more.

A different take on cheese

With a sweet-tangy flavor and sometimes salty, grassy undertones, goat and sheep's milk cheeses have been loved around the world throughout history.

Sugar: why do we crave it during winter?

During the cold, dark winter months, we get less sunlight, less exercise, and many people experience Seasonal Affective Disorder (SAD), a mild form of depression.