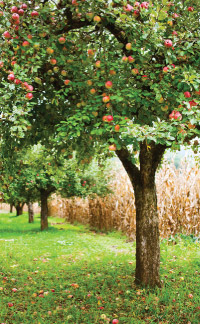 Some varieties of Washington apples may not have been picked in time due to the smoky conditions from wildfires in Central Washington this fall that prevented picking.

The Washington apple industry reportedly generated $7 billion in total economic output in the 2010-11 season, including all levels of production, packing, processing, marketing and research. The industry accounted for nearly 60,000 jobs.

Americans’ demand for avocados has skyrocketed recently. Consumption in the first half of 2012 was 30 percent ahead of the same period last year. Mexican imports, available in all 50 states only since 2007, now contribute more than 60 percent of U.S. supply.

Washington is the leading producer of spearmint and peppermint in the world, widely used to flavor gum and toothpaste. The state produces enough mint oil each year to supply every American resident with 135 sticks of gum.

Cheese prices are on the rise on the Chicago Mercantile due to lower cold storage supplies, higher dairy cattle slaughterhouse rates and an expectation of lower milk production. Higher milk prices may be on the way.

U.S. seafood landings reached a 17-year high in 2011, according to a 2011 U.S. Fisheries report. These landings were achieved even with the announcement that 156 million pounds of seafood were discarded in one year in the U.S. Northeast alone. Ironically, U.S. per-capita seafood consumption dropped to its second-lowest level in 10 years.

PCC Board of Trustees report, November 2012

Board report, New Local Suppliers, Next board meeting, and more

Partnering with our producers

In this month of Thanksgiving, we want to thank the many farmers and other producers whose products you so enjoy. Our relationships with them often have been cultivated over many years, and go deep.