This article was originally published in August 2012

In a world where the number of plant species has diminished so much that only 12 make up 70 percent of our food, heirloom tomatoes are shining beacons of hope — beautiful, delicious reminders that biodiversity still thrives for at least one fruit.

Each colorful variety has its own history and offers unbelievable flavor that can electrify a salad, sandwich or other dish. You’ll find the following varieties in the produce department at PCC this August.

Never, ever refrigerate tomatoes. The cold converts the tomato’s sugars to starch, reducing their sweetness. It also breaks down the cells, making the tomato mealy and/or spongy.

Keep them at room temperature, out of the sun, stem side down to prevent moisture from escaping the “scar.”

Polyphenols are associated with reduced risk of cardiovascular and degenerative diseases, and some forms of cancer.

Introduced in the late 1800s by the Amish, the Brandywine is found in a variety of colors but most commonly is a reddish-pink. It has a rich, sweet flavor and makes a good slicing tomato that is best eaten raw.

Originally grown by the Cherokee tribe more than 100 years ago, this tomato is a dusky purple color with a hint of green. It’s prized for its sweet, smoky flavor.

Yellow-orange streaked with red, the bicolored Marvel Stripe originated in Oaxaca, Mexico, in the 1800s. It’s big and beautiful with deep orange marbling inside and a fantastic fruity, sweet taste that’s best when eaten fresh and lightly seasoned.

Small yet bold, the Green Zebra is one of the most visually stunning of all heirlooms. Its green skin is marked with yellowish-green stripes — slice one open and inside you’ll find sparkling green flesh. With a tangy, tomato flavor, Green Zebras add great color to salads and other dishes.

Pastel pink marked by golden stripes, the Vintage Wine has a striking deep pink interior and thick, juicy pulp. It boasts a finely balanced flavor that complements most dishes.

The sweet, earthy flavor of the Chocolate Stripe is enchanting, and its mahogany skin striped with green is a sight to behold. Slice one up for sandwiches or add it to a salad.

An Italian favorite that has been around since the early 19th century, this tomato is known for its intensely flavorful, deep-red flesh. It’s delicious for fresh eating, preserving and sauce.

Gorgeous pink and very sweet, the Zapotec is excellent for stuffing, or for slicing to show off its scalloped edges. It’s an heirloom from the Zapotec Indians of Mexico.

Some of our favorite growers

For Harmon and Noreane Walker, growing tomatoes on their family farm has been a passion for nearly 30 years. Harmon grows his own seedlings and chooses those that maximize flavor and sweetness. Each fruit is handpicked. View their producer profile » 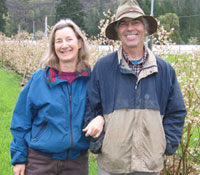 Jim Chambers’ and Patti Riemers’ farm is a bit unusual not just because its electricity comes from solar panels, but also because most of the land isn’t farmed at all. The couple received federal funding to dedicate 10 acres bordering a creek to riparian plantings that support salmon, and converted another 10 of their 35 acres to a native-species forest. “We have so many more pollinators now because the bees have a place to live,” Jim says. Jim grows Prudence Purple Brandywines because they’re more dependable than other heirlooms, which are hard to grow. 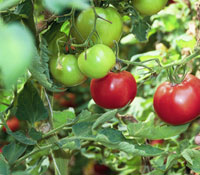 Tom Denison has been farming for more than 30 years on a 20-acre farm just north of Corvallis, Ore., overlooking the Jackson- Frazier Wetland. In passive solar greenhouses, he captures enough heat to grow heirloom and cherry tomatoes, including Brandywine, Purple Cherokee, Black Crimson and Marvel Stripe, which he says is a particular favorite. “We like growing heirlooms but they’re challenging because they tend to not have as much disease resistance,” Tom says, adding that getting good-quality seed is an additional challenge. Nevertheless, he’s expecting a good harvest this year. 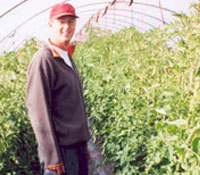 At this family farm located on fertile farmland along the Willamette River, Gabe Cox, Sophie Bello and their crew grow about 15 varieties of heirloom tomatoes including Brandywine, Purple Cherokee and Marvel Stripe. To ensure successful crops, the farmers graft heirloom tomatoes onto disease-resistant roots. “The best thing to do with heirlooms is eat them raw,” says crewmember Tom.

Letters to the editor, August 2012

The many ingredients in toothpastes can be confusing. Here's a look at what they do for teeth, and why it's important to buy natural brands.

PCC is pleased to announce pastured, organic Washington chickens are available now at our Fremont, Edmonds, Issaquah and Redmond stores.