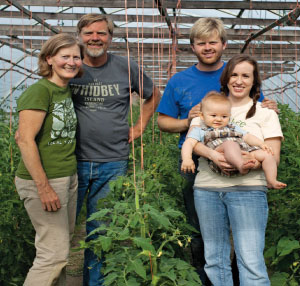 View “The Growing Revolution,” a short video about Jubilee Farm. Watch the video

Jubilee Farm in Carnation is something of a local landmark, bordered on its sides by woods, marsh and rings of mountains in the distance.

People know and love it; bicyclists, motorcylists and walkers ride and stroll the Snoqualmie River Road through its central stretch. A sense of community and belonging permeates the farm’s beautiful, immaculate grounds.

Jubilee is not a new farm on the block: this is Erick and Wendy Haakenson’s 17th season running one of the largest and most well-established Community Supported Agriculture (CSA) farms around.

As is the case with most CSAs, members buy a “share” early in the farm season and, in exchange, receive a weekly box full of the farm’s bounty. Many of Jubilee’s CSA members have been supporting the farm since the very beginning and also participate in the farm’s U-pick program onsite.

About half of Jubilee previously had been conserved by the King County Farmland Preservation Program. When there was an opportunity to partner with King County to preserve the remaining half through the County’s Transfer of Development Rights Program, PCC Farmland Trust jumped at the chance.

Now, thanks to the vision of the Haakensons and the combined resources of King County and the trust, the entirety of this much-loved biodynamic farm will remain local organic farmland forever. 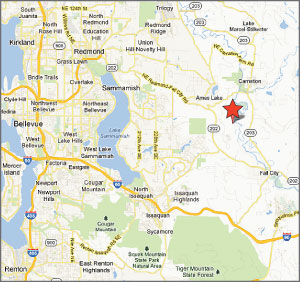 Part of the trust’s mission is to educate people about why it’s so urgent to save local farmland. One big piece of that urgency is the rate at which farmers are aging out of the profession. The average age of the American farmer hovers around 60 years old; in less than 10 years, about 70 percent of our nation’s remaining farmland will change owners.

That’s why, in the case of Jubilee, there’s a real feeling of celebration around a second generation returning to the farm. David Haakenson, Erick’s son, is a bit of a statistical anomaly — a farm kid who moved away to the city but chose to come back after exploring other careers.

“I always figured I’d go back to farming,” states David, matter-of-factly. In 2011 when his father Erick started talking about the long-term future of the farm, the timing was right, as David and his wife Kristin were ready to settle and start their own family. Most farmers aren’t as successful in passing on their farms to their children.

“I feel a little spoiled as a second-generation farmer,” David says, acknowledging how tough it is for those starting from scratch.

But he also understands why traditional large-scale industrial farming is not an appealing option for sons and daughters. “So many people work hard so their kids don’t have to farm.” He paused a beat. “But I like to farm.” And looking around at the blooming small-scale, biodynamic farm around us, it’s easy to imagine why.

Even while he was a teacher for Tacoma Public Schools, David says he retained the farmer’s constant awareness of weather minutia. In an idle moment, he would find himself wondering how the day’s weather was affecting the fields. In part, it was the variety and freedom that farming can offer that drew David back, but it’s also apparent the influence that Erick Haakenson has had on his son.

One thing that’s always struck him about his dad is just how excited he is about farming, and how that enthusiasm comes shining through. “I’ve never met anyone who works as hard as my Dad, and with as much enjoyment.” Despite the long hours and never-ending work, Erick Haakenson always has been quick with the farm charm — breaking into a grin and telling you all about the amazing things happening at Jubilee, and why you should participate.

Both father and son have teaching backgrounds, and David relishes the opportunity to educate children on the farm. In the summer and fall, Jubilee Farm is buzzing with school kids and the children of its CSA members.

“Just bringing them on the farm is an education,” says David. “You don’t even need structured lessons — just being on the farm teaches kids.”

With all the talk of farms and kids and future generations, I asked if he hoped his cherubic 9-month-old Micah might someday go into farming. “Well,” he said, breaking into a Haakenson smile, “My very first word was ‘tractor’.”

Kristin Vogel is the communications manager at PCC Farmland Trust.

Whether you're looking for a toothpaste for sensitive teeth or one with fluoride, this chart helps you understand the differences between products you'll find in our stores.

PCC Board of Trustees report, August 2012

June board meeting report, Farewell message, What are Ends policies?, and more

In a world where the number of plant species has diminished so much that only 12 make up 70 percent of our food, heirloom tomatoes are shining beacons of hope.