This article was originally published in July 2012 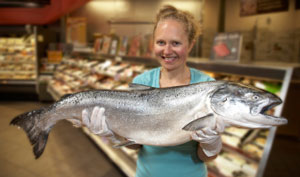 PCC is ranked #1 for seafood sustainability.

Editors note: PCC relies on research and information from a variety of non-governmental organizations (NGOs) and foundations. From time to time we’ll have these trusted sources share their perspectives about what issues and projects they’re pursuing.

2012 is forecast by many to be a year of great change and, from an ocean conservationist’s perspective, this comes not a moment too soon. Even now, in spite of overwhelming evidence and strong warnings from the scientific community, we continue to plunder our seas at an astonishing rate.

In the United States, supermarkets are one of our strongest connections to the oceans. American consumers buy about half their seafood at the fish counter, but conservation efforts have a history of bypassing retailers and concentrating on the individual shopper. Unfortunately, this method alone will not reduce pressure on our fish stocks to acceptable levels — rather, supermarkets themselves must participate in global ocean conservation.

With Greenpeace USA’s Carting Away the Oceans (CATO) project, we see a glimmer of hope in this critical sector. Greenpeace recently released the sixth iteration of its CATO report. This annual report examines 20 of the largest seafood retailers in the United States and unpacks their respective commitments to seafood sustainability (or lack thereof, in some unfortunate cases). Each retailer then is awarded an overall score ranging from zero to 10 based on this analysis.

Over the last five years, the CATO report has showcased tremendous change in the industry at large. The original installment in 2008 saw all 20 of the analyzed companies receive a failing grade. This year, only four out of 20 failed — a massive shift in only five years. We’ve also seen the decline of unsustainable species such as orange roughy, which was sold at 18 out of 20 retailers in 2008, but now is available at only five.

The biggest story coming out of this year’s CATO report is the movement of two particular large-scale retailers, Safeway and Whole Foods. Through progressive policy development, public support for conservation measures, increased transparency in the supply chain, and the elimination of some unsustainable (“red-list”) seafood inventory items, Safeway and Whole Foods have crossed into Greenpeace’s “good” category, achieving scores of 7.1/10 and 7.0/10 respectively. The reality, though, is that there are even better options available.

The CATO project does not reflect the actions of a handful of small, progressive companies that have gone above and beyond, bypassing Safeway and Whole Foods. Indeed, according to the Greenpeace metholodogy, the most sustainable seafood retail chain in the United States is none other than PCC.

With an estimated score of above 9.0/10, PCC sets a stratospheric bar for the industry, as it has done every year since 2010, the first year it was evaluated. PCC sells zero red-list species, an unmatched number compared to the larger retailers in the report. The CATO retailer with the second-lowest number of red list species is Aldi, which sells six. Safeway sells 11 and Whole Foods sells 12.

A second-to-none internal vetting process at PCC precludes the sale of any seafood item that has any dubious characteristics in terms of stock status, catch method, or management technique. Greenpeace salutes PCC and its continuing commitment and contributions to the health of our planet and its vulnerable oceans.

There is still room for improvement, and if the large U.S. retailers conducted their seafood operations with the same ethic and rigor that backbones the PCC sourcing process, our oceans would be in a much healthier state. Some industry players are making real progress, but others seem to be spending more on greenwashing and marketing ploys than on making real change. This is still common among several chains near the bottom of the CATO VI rankings, but thankfully is not as prolific as it once was.

Consumers deserve to be able to purchase seafood from retailers that care about the condition of our oceans and that properly steward our marine resources. The days of selling fish with no regard for the environment are over. Companies have two choices — they can implement strong seafood policies and become leaders, or they can ignore reality and continue their unsustainable seafood practices until many popular seafood items are no longer available. Increasingly, if they choose the latter course, they will reap the wrath of a consumer public that simply has had enough.

Read other seafood-related articles in this issue, including:

So many flavors, so little time — the ice cream aisle at PCC is overwhelming, we know. It's an eternal debate: should you choose cool, pure vanilla or classic chocolate? Or, is it time to go for something outrageous?

PCC Board of Trustees report, July 2012