Hungry Planet – What the World Eats 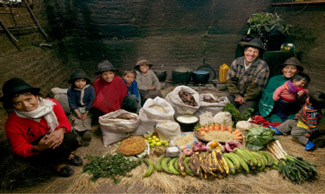 The Ayrne family in their kitchen house in Tingo, Ecuador, in the Andes, with one week’s worth of food. The photo
is part of the “Hungry Planet” exhibit.
Photo: Peter Menzel

Imagine your family collected every food and drink it consumes in a typical week — every carrot, every grain of quinoa, every coffee bean, every PCC take-and-bake pizza — and you took a snapshot of it all piled up in your kitchen. What would the photo show? That’s the question you may ask yourself after visiting the Burke Museum of
Natural History and Culture’s exhibit, “Hungry Planet: What the World Eats,” which runs through June 10 and is sponsored by PCC.

The exhibit is based on the 2005 book of the same name by Peter Menzel and Faith D’Aluisio, who traveled the world photographing and writing about the food shopping, cooking and eating patterns of 30 different families in 24 countries. At the exhibit you’ll see the authors’ images of a meat market in Africa, a tortilleria in Mexico, and a traditional farm in the Andes mountains. Giant photos of 10 profiled families and their food show striking differences between cultures. A family in Africa eats for just a couple dollars a week, mostly dried grains and legumes, while a German family spends more than $500 a week, including more than $50 on meat. But you may be surprised by the similarities among many of the diets. It’s impossible not to be troubled by just how much the processed and fast foods of America have infiltrated cultures abroad and usurped traditional diets. A family in Mexico drinks 12 2-liter bottles of Coke weekly, for example, while a family in Beijing eats KFC chicken and French fries.

PCC is sponsoring “Hungry Planet” and is hosting cooking demos, nutrition talks and events with PCC staff throughout the exhibit. For 2012, PCC members receive $10 off basic membership to the Burke or 50 percent off general admission tickets; kids under five are free.

PCC tastings are scheduled at 11 a.m. and 1 p.m. and include recipe demonstrations as well as sample bites of the featured cuisine.

“‘Hungry Planet’ raises questions about the choices we make every time we sit down to dinner. Where does our food come from? How did it get to our table? And most intriguing, how has the food we eat in the Pacific Northwest changed over time?,” says Carl Sander, the Burke’s public programs manager. “Salish Bounty: Traditional Native American foods of Puget Sound” is part of the exhibit that addresses these questions. It’s a collaboration between the Burke and local tribal members, and connects Burke research on 5,000 years of tribal diets to current efforts
to revitalize Coast Salish food traditions.

“If you look at what people ate five or six generations ago on an annual basis, there are hundreds of types of foods. Research now is showing that most Americans eat less than 12 foods on a regular basis,” says Northwest
Indian College’s Elise Krohn.

A striking part of the exhibit is a list of about 300 foods eaten by Pacific Northwest natives. Have you ever heard of bullwhip kelp, kinnickinick, belted kingfisher, Townsend’s chipmunk and scorpionfish? Probably not, but you’ll recognize foods we still enjoy today, such as salmon and huckleberries.

“‘Hungry Planet’ challenges many of our preconceptions and stereotypes about what people eat around the world and is an inspiring portrayal of food diversity,” says PCC Nutrition Educator Nick Rose, who will be giving talks at the exhibit on the benefits of plant-based diets and organic foods. Other PCC staff and PCC Cooks instructors also
will give demonstrations (see sidebar).

PCC’s Sara Walsh, who spearheaded the PCC-Burke partnership, adds, “We’re delighted to have the opportunity to partner with the Burke on such an impactful project. We hope you’ll come learn something, think about your
own diet, and maybe taste something new!”

PCC advocates buying organic and not just because of pesticides, antibiotics and hormones. Unlike conventional farmers, organic farmers can't use sewage sludge as fertilizer. It was one of the most hotly contested battles in developing national organic standards. Here's why.