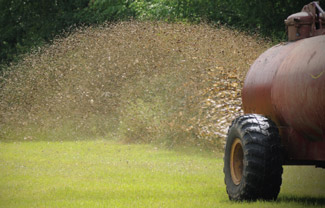 PCC advocates buying organic and not just because of pesticides, antibiotics and hormones. Unlike conventional farmers, organic farmers can’t use sewage sludge as fertilizer.

It was one of the most hotly contested battles in developing national organic standards. Here’s why.

When Alice Cho Snyder and her husband Mark bought a 13-acre farm near Everett, Wash., last July, they thought they were going to be organic farmers, not the epicenter of a biosolids storm. Shortly after the Snyders closed on the property, Snohomish County officials notified the couple that biosolids were slated to be applied on 250 acres of land bordering their property.

“Biosolids” is a recycling industry term for sewage sludge that has been treated to remove most (or in some cases, nearly all) pathogens. After being somewhat defanged, biosolids are used as fertilizer or soil amendments.

The trigger words here — for the Snyders and for nearly anyone concerned with health and the environment — are “sewage” and “most” pathogens. Anytime a public agency or any other entity proposes spreading human waste, bacteria, viruses and other toxic contaminants over the landscape, regardless of the purpose, eyebrows are going to go up.

For the Snyders and those who don’t know much about sludge or how it’s applied to land, biosolids sound new, threatening and complicated. “We all want to support locally produced food,” says Alice, “but not if grown in sludge.”

Using sewage for fertilizer might sound threatening, at face value, but it’s hardly a new practice. About 7 million tons of dry sewage waste (most of it originating at watertreatment plants) is applied to land in the United States each year, according to the U.S. Environmental Protection Agency (EPA).

About 58,000 dry tons of biosolids were applied to agricultural lands in Washington in 2010, says Daniel Thompson, state biosolids regulator for the Washington State Department of Ecology.

Despite the inglorious name, sewage sludge isn’t just pumped directly onto land. The vast majority of biosolids fit EPA’s “Class B” category, meaning it has been treated to remove at least 95 percent of the pathogens in the original slurry (sewage isn’t just human waste; also it’s often composed of industrial effluent and/or storm water).

EPA sets limits on the presence of eight heavy metals (arsenic and mercury have the most stringent requirements). Few U.S. treatment plants are equipped to produce the more costly “Class A” biosolids — wastes in which pathogens have been reduced to a point “below detectable levels.” (Tacoma does.)

For more than three decades, EPA has offered a resounding yes. The agency has promoted biosolids as “safe and beneficial” at least since 1981, after first developing risk guidelines in 1979. The current EPA regulations (called the 503 Rule) for what the agency calls “sewage sludge” and “biosolids” came into effect in 1993.

David L. Lewis, Ph.D., a research microbiologist for EPA for 32 years, contends the agency based its 1993 regulations on “faked data” in an effort to “cover up adverse health effects from heavy metals and other hazardous
materials contained in the waste.”

Lewis, now senior science adviser for the National Whistleblower Center in Washington, D.C., says biosolids are “a serious threat to public health and the environment.” Lewis says he was fired in 2003 after authoring a series of articles in “Nature,” “Environmental Health Perspectives” and other publications that criticized EPA’s science policies and practices, and the agency’s management (and promotion) of biosolids in particular.

“Biosolids are one of the most regulated soil amendments out there,” argues Sally Brown, Ph.D., a research associate professor at the University of Washington in Seattle. “I use biosolids to grow my own vegetables. They’re a wonderful asset.”

Brown, who specializes in the ecology of soils and serves on the board of directors of the U.S. Composting Council, adds, “There’s nothing to be afraid of.”

Brown notes that biosolids have been used to reclaim soil health on several EPA Superfund sites, including the infamous Bunker Hill mining complex in Idaho, where mining operations begun in 1917 left 1.3 million cubic yards of tailings contaminated with lead, zinc and industrial wastes in the watershed of the south fork of the Coeur d’Alene River. The mine closed in 1981 and eventually became the locus of EPA’s largest Superfund settlement — $1.7 billion to date.

“Eventually we will run out of resources and disposal space, so we must redefine our definition of what is disposable …”
— Washington State department on ecology’s statement about one rationale behind using biosolids as fertilizer

And so it goes. There seem to be few agricultural practices as contentious and fraught with counterclaims as whether biosolids are a public health threat.

Farmers such as Alice Cho Snyder say, “The more we find out, the more we are convinced that this is a critical public health issue that needs to be addressed openly.”

Alice says she’s worried that if her neighbor’s application to use biosolids is approved by Snohomish County land-use officials, bacteria and toxins will wash over her property when the area floods, which she says it has — twice in the last five years.

The safety of biosolids has been addressed openly, but not conclusively. One question readers might ask is whether the agencies or entities that promote biosolids as safe are themselves competent to know (or say) what safe is (or means).

In 2002 EPA’s own Inspector General determined that the agency “does not have an effective program for ensuring land compliance” of biosolids, and thus “cannot assure the public that current land application practices are protective of human health and the environment.” The report also criticized EPA for conducting “virtually no inspections of land application sites.”

The Inspector General also castigated EPA for not collecting data on accumulated pollutants at biosolids application sites despite the fact that federal law requires the agency to collect such data. EPA also failed to monitor whether producers or appliers actually adhered to federal regulations. The Inspector General concluded that EPA’s failure to commit resources to the biosolids program constituted an “almost complete absence of a federal presence,” adding that the agency’s conduct “may result in increased risks to the environment.”

That was 10 years ago, which leads to the inevitable question: has EPA intensified its oversight of biosolids? When the Inspector General leveled these charges, EPA had 18 fulltime employees assigned to sewage sludge.

This past December, I requested current staffing data from the agency. Enesta Jones, a public affairs specialist for the agency, responded that “finding a precise figure was going to be hard …” The agency has yet to report so much as a single full-time employee currently working on biosolids.

These criticisms hardly inspire confidence in EPA as a biosolids regulator. But even the regulations themselves are suspect, according to Lewis and others. In February 2008, federal judge Anthony Alamo concluded the data used (in part) to develop EPA’s biosolids guidelines were “unreliable, incomplete and in some cases, fudged …”

Alamo’s condemnation of the science behind EPA’s regulations was issued during an Augusta, Ga., lawsuit. Several farmers alleged that biosolids shipped from a nearby wastewater plant had contaminated their jointly owned farm, killing several hundred cattle and forcing closure of the farm. Andy McElmurray and other farmers ultimately settled out of U.S. District Court for $1.3 million after arguing that high levels of chromium and molybdenum in biosolids were responsible for the cattle deaths, and for the loss of their livelihood.

No human deaths have been linked conclusively to biosolids (although one death has been alleged — that of Shayne Conner in 1995 in Greenland, N.H.). EPA’s regulations do make an attempt to minimize human contact with biosolids, by regulating how much time has to pass before crops in contact with biosolids can be consumed. The time lag is meant to allow a natural dieoff of whatever pathogens remain in Class B biosolids. The regulations, however, don’t set limits on any manufactured organic compounds in biosolids.

In 2008 scientists from the U.S. Geological Survey and Colorado State University found that earthworms in soil plots amended with biosolids had bioaccumulated multiple human-manufactured compounds, including: disinfectants, anti-foaming agents and flame retardants, antibiotics, synthetic fragrances, detergents and pesticides, as well as other chemicals “reflecting a wide range of physicochemical properties” (Environmental Science & Technology, Feb. 20, 2008). Some of the same compounds were found in earthworms living in soils treated with animal manure.

In 2006 scientists from Eastern Washington University and the U.S. Geological Survey’s National Water Quality Laboratory found a total of 87 different human-manufactured compounds in biosolids originating from wastewater treatment plants in seven U.S. states. The researchers described biosolids as a “potentially ubiquitous nonpoint source” of “contaminants” in the environment (Environmental Science and Technology, Sept. 13, 2006).

“A minimum of 30 and a maximum of 45 [wastewater contaminants] were detected in any one biosolid,” the scientists noted.

Again, this is not comforting to the Snyders or other organic farmers. They’d like to know that when EPA says, “It’s safe,” it means safe. In the meantime, the Snyders are waiting for a hearing with Snohomish County officials. The state Department of Ecology approved an application to spread biosolids on the neighboring property, but county officials have argued that the state cannot preempt local land-use regulations.

Tom Rowe, permitting manager for Snohomish County, says the county is planning a hydrology survey of the area to determine what impact flooding (among other issues) might have on public health if biosolids are allowed. Rowe says the county plans to hold a public hearing on the issue.

Joel Preston Smith is a writer and photographer living in Portland.