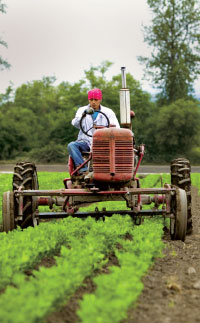 The Texas Rio Star grapefruit season was shorter than usual due to the freeze last winter and hot summer.

The organic Minneola crop is huge this year with nice-sized fruit.

Avocado supplies are expected to rebound in 2012 after a season of high prices and light crops in California, Mexico and Chile. California, which produces 90 percent of the nation’s avocados, saw a 54 percent decline last year over the previous year’s bumper crop but expects to produce a more normal 400 million pounds this year.

Sourcing organic bananas continues to be a challenge. The “Grow” program fruit is a mixture of Mexico- and Ecuadorgrown, each with different maturity levels and ripening times that are hard to gauge.

More apples were harvested during the 2011 season than previous estimates suggested: more than 104 million 40-pound boxes. The increase was due to more fruit in a late harvest being picked in November than was projected.

Three species of California rockfish now are subject to overfishing according to a NOAA Fisheries update.

Snapper from Hawaii has been upgraded by the Seafood Watch program. Red, ruby and pink snapper now are “good alternatives” instead of species to “avoid.”

Farm profits are estimated to have spiked by 28 percent in 2011, thanks to high prices for many crops, livestock and farmland and strong global demand for corn used in making ethanol.

China recently purchased 900,000 tons of American corn — one of its biggest overseas corn purchases ever. China was a net exporter of corn until 2009 but as more Chinese eat meat, there has been growing demand for corn for animal feed.

Letters to the editor, February 2012

New worries about the hazards of an herbicide used on genetically engineered (GE) crops are being ignored by the U.S. Department of Agriculture (USDA).