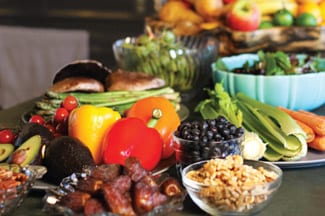 Paleolithic diets: Should we eat like our ancestors?
Photo by Bethany Nauert

PCC employee Janice Parker has eaten a whole-foods diet for many years, but 14 months ago she changed it in a way that led her to shed 30 pounds, feel less joint pain, sleep more soundly, have more energy, and, remarkably, control her diabetes without medication.

Her diet, recommended by her physician, now is based on grass-fed meat, fish, leafy greens and other vegetables, fruit, nuts and seeds.

“Sometimes my breakfast is eggs with sliced avocado and tomato, and I may have greens and chicken breast or pork loin for lunch,” she says. A handful of almonds makes a satisfying snack. What you rarely find on her plate is bread, rice or other grains, dairy, beans, sugar or other processed foods.

Janice isn’t the only person who has benefited from this way of eating. It has been popularized in recent years as the “Paleolithic Diet” and is based on the premise that eating like our distant ancestors can help control weight and reduce the risk of diabetes, coronary heart disease, acne, asthma, irritable bowel syndrome and certain other disorders.

They are termed the “diseases of civilization” or “diseases of affluence,” due to their near-absence from cultures that haven’t adopted an industrial diet or lifestyle. Dr. Staffan Lindeberg at the University of Lund, Sweden, for example, studied the residents of the Melanesian island of Kitava, one of the few remaining cultures untouched by industrial foodways.

“The residents of Kitava lived exclusively on root vegetables (yam, sweet potato, taro, tapioca), fruit (banana, papaya, pineapple, mango, guava, watermelon, pumpkin), vegetables, fish and coconuts,” writes Dr. Lindeberg. His research shows that Kitavans appear to be free of obesity, diabetes, heart attacks, stroke and acne. In the 1960s, American researchers studied thousands of Ugandans and Nigerians living traditionally and found their heart attack risk to be essentially zero, even among the elderly, while the same study found that comparable populations in the United States had a risk of up to 23 percent.

Before people cultivated grains and legumes, and before modern technology produced refined flour, sugar and oils, our ancestors ate what they could hunt, fish and forage. Modern-day adherents of “Paleo” diets for the most part don’t hunt for meat or gather roots and berries — but they do stick to food types that would have been available to pre-agricultural populations, such as starchy roots, meat, seafood, fruits, vegetables and nuts.

The diseases of affluence

In contrast to non-industrial populations, the prevalence of some diseases of affluence has increased substantially over the last century in the United States and other industrialized nations. One-third of Americans are obese, and another third are overweight. One third is expected to develop diabetes at some point in life. We’re in the midst of an unprecedented public health crisis, and our health care bills reflect it.

Why do we suffer from disorders that non-industrial populations — even our recent ancestors — largely escaped? Modern medical research continues to grapple with this problem, but we can begin to answer it by asking a simple rhetorical question: what would we feed a wild animal in captivity if we wanted to keep it healthy? If we fed eucalyptus leaves to a tiger, would it thrive? What if we fed meat to a koala? Each animal is adapted to a particular ecological niche where it evolved to thrive. Exiting that niche, particularly by eating the wrong food, causes health problems.

For instance, although wild gorillas are not known to develop obesity or heart disease, captive gorillas fed processed but nutritious biscuits are just as susceptible to these conditions as humans. The Cleveland Zoo recently showed that returning its gorillas to a diet rich in leafy greens caused them to lose excess weight.

Evolution of the human diet

One reason we’re developing disorders our ancestors did not is that technology has allowed us to exit our natural ecological niche. We’re eating radically different foods and living a radically different lifestyle than those we evolved to thrive on. This leads to an important question: what is the natural human diet and how can we approximate it in the modern world?

The earliest primates living more than 60 million years ago probably consumed a diet centered on fruit, leaves and insects, just like most primates today. This pattern began to change around 2.6 million years ago when our early ancestors began crafting stone tools. This was the beginning of the Paleolithic era, and research shows our ancestors experienced gradual but substantial changes in dental and digestive structure thought to represent adaptations to eating meat and cooked starches, at the expense of leaves and fruit. At the same time, the archaeological record shows an increase in the number of animal skeletons showing clear evidence of hunting and butchering, and hearth sites that suggest cooking.

By the time modern humans emerged roughly 50,000 years ago, our ancestors had adopted an omnivorous diet of cooked starches, meats (including organs), nuts, fruit and other plant foods. Although very few hunter-gatherer groups survive today, we know they eat a wide range of diets, from the nut-based diet of the African !Kung, and the palm starch diet of New Guinean hunter-gatherers, to the meat- and fat-rich diet of the Arctic Inuit.

As Michael Pollan writes in “Food Rules,” “There is no single, ideal human diet.”

Modern hunter-gatherer diets, however, tend to have certain things in common. They don’t rely heavily on foods that became dominant after the development of agriculture, including dairy, grains and legumes. Starch comes from root vegetables similar to sweet potatoes, potatoes and taro. But most important, they do not eat industrial, processed foods. Other aspects of lifestyle, such as physical activity, also differ from industrialized populations.

A small group of researchers is beginning to test the idea that pre-agricultural “Paleolithic” diets might hold the key to improving modern human health. Dr. Lindeberg and his colleagues have conducted two remarkable clinical trials.

In the first, they recruited diabetic and pre-diabetic volunteers with heart disease and placed them on one of two diets: 1) a “Paleolithic” diet, focused on lean meat, fish, fruit, vegetables, starchy root vegetables, eggs and nuts, or 2) a “Mediterranean” diet focused on whole grains, low-fat dairy, vegetables, fruit, fish, oils and margarine. Over the 12-week study period, the Mediterranean group lost body fat and enjoyed an improvement in markers of diabetes. Of nine participants with diabetic blood sugar levels at the beginning of the study, four had normal levels by the end.

Those in the Paleo group fared significantly better. They lost 70 percent more body fat than the Mediterranean group and experienced a remarkable normalization of blood sugar. All 10 participants with diabetic blood sugar levels at baseline reached non-diabetic levels by the end of the study. It’s important to note that the volunteers in Dr. Lindeberg’s study were mild, early cases of diabetes. A second study of long-term diabetics showed that a Paleo diet did not cure them but it did improve their condition significantly.

Should we all eat a hunter-gatherer diet? Not necessarily. Human evolution did not end with the Paleolithic era. Each person carries a particular set of genetic adaptations that result from the unique dietary environment of his own ancestors, so it’s important to emphasize that traditionally prepared grains, legumes and dairy can be healthy foods for many people.

Over the last century, a period far too short for significant genetic adaptation, industrialization has changed radically the way we eat.

Today, the majority of food that typical Americans eat is prepared commercially, either in packages or from restaurants, and refined sugars and fats are universal. These foods are designed to be extremely palatable — so palatable, in fact, they run roughshod over the body’s normal satiety signals and encourage overeating. The top six calorie sources in the U.S. diet today are grain-based desserts (cake, cookies, etc.), yeast breads, chicken-based dishes, sweetened beverages, pizza and alcoholic beverages. These are a far cry from the foods that sustained our ancestors.

“People who significantly increase the amount of vegetables, fish, nuts, lean meats and fresh fruits in their diet, and who reduce their grain, dairy, and legume intake have lower blood sugars, usually lose weight, and usually have more energy,” says Dr. C. Vicky Beer, a local physician who uses the Paleo diet in her clinical practice. “Every patient I have ever had with diabetes who has adhered to the Paleo diet for most of the time has experienced dramatic results,” she adds.

Diet related chronic diseases are the single largest cause of mortality, yet are rare in traditional cultures.

Some people who already favor a whole-food diet can’t imagine eliminating favorite foods, such as whole grains and dairy. An informal poll of PCC employees turned up responses such as, “I couldn’t live without beans or yogurt,” and “A world without cheese is not one I’d want to live in!” For many of these people, a Paleo diet is not necessary for good health.

But for certain people with serious health conditions such as Janice Parker, the PCC employee who lost weight on the Paleo diet and is managing her diabetes without medication, this diet is worth it. Janice takes a flexible approach.

“I still add a splash of organic, pastured Pure Eire cream to my coffee,” she says, and she has adapted her favorite cornbread and pancake recipes to use almond flour. “It’s not even difficult to eat out. Having a piece of protein with some veggies and salads is pretty easy.”

After all, such simply prepared foods are what sustained our ancestors for thousands of generations before us.

Stephan Guyenet is an obesity researcher at the University of Washington. Visit his blog, wholehealthsource.org, to read more of his writing on nutrition and health.

Like blackberries, apples and other foods emblematic of our region, salmon have a season. But we can enjoy the fish year-round because they often are canned or flash-frozen right where they're caught, capturing their quality and nutrition.