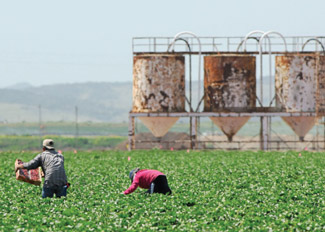 The story wasn’t covered by CNN, the Associated Press or Fox News. Chavez was just one more pair of hands in the endless stream of bent-backed migrants picking the state’s 25 million acres of peppers, lettuce, melons and berries.

He was important, however, to the United Farm Workers (UFW), which argues that the working conditions that caused Chavez’s collapse are commonplace for field hands throughout the United States. Heat exhaustion, lack of water, severely restricted breaks, and other harsh working conditions have been implicated in farmworker deaths in several states. Farmworkers say that even attempting to take a break sometimes provokes growers to threaten to fire workers.

“Growers feel they can do whatever they want,” says Erik Nicholson, national vice president at the UFW. “The current collective bargaining approach is broken, and growers have no incentive to bargain with migrants.”

Indeed, farm workers have no federally protected right to bargain collectively — a right that would force growers and other employers to bargain in good faith — and therefore have little power to work collectively for safer, more humane working conditions. When the National Labor Relations Act was passed in 1935, farmworkers, domestic laborers and a few other groups were cut out.

Without such rights, workers or members of a union might demand higher wages, or that employers provide them with safety equipment. But neither workers nor unions legally can compel an employer to meet those demands, or even listen to grievances.

Many growers (and agribusiness owners) contend that raising farmworker wages would spike food prices. A labor economist at the University of California-Davis, Philip Martin, however, has argued that a 40 percent boost in wages would cost the average American household only about $15 a year.

For many consumers, it’s a bitter issue — the nagging feeling that while food is cheaper in the United States than anywhere else in the world, every meal is subsidized by underpaid and overworked farmworkers. The battle to win worker protections, advocates argue, is key to a humane, safe and sustainable food system.

The problem is confounding given how much we rely on farmworkers — and how great the cost when there aren’t enough. Labor shortages are increasingly common; this year, Washington apple growers experienced the worst shortfall of hired hands in 10 years.

One Washington apple company, McDougall & Sons, resorted to paying inexperienced prison inmates $22 per hour to pick during the height of the 2011 season. Experienced pickers — 70 percent of whom are illegal migrants — typically make $15 an hour.

UFW’s Nicholson and other farmworker advocates know that abuse of farmworkers goes far beyond field conditions. In some cases, laws might seem to encourage systematic exploitation. The Supreme Court, for instance, determined in 2002 that employers can fire undocumented workers and refuse back pay for earned wages.

In the case of Hoffman Plastic Compounds v. the National Labor Relations Board, the court determined that paying undocumented workers “would encourage the successful evasion of apprehension by immigration authorities …” In that case, a Mexican immigrant named José Castro had been fired, according to the court, for “support[ing] a union-organizing campaign.” The court further argued that paying back wages to an undocumented alien would “condone prior violations of the immigration laws.”

In the case of Nicholas Chavez against the Bakersfield grower, the UFW filed charges on behalf of Chavez and launched a letter-writing campaign to California’s governor demanding humane working conditions for farmworkers. But without federally protected collective-bargaining rights, farmworker advocates are stuck fighting alleged abuses one by one.

It’s difficult to explain how farmworkers got the short shrift in the national labor market — compared to truckers, janitors, nurses, letter carriers and just about everyone else who gets a paycheck for something other than dog walking or running moonshine.

Labor policies then — including President Roosevelt’s New Deal — were aimed at improving the lives of whites.

Neither white growers nor white political leaders could tolerate the idea of blacks bargaining for wages and working conditions on an equal footing. Segregation didn’t keep African Americans from sharing only restaurants, schools and public office with whites; it banished them from collective bargaining.

Conditions have changed. Hispanics now outnumber all other ethnic groups working on U.S. farms. More than half of all crop workers are undocumented, according to the National Agricultural Workers Survey. Its 2004 report says, “Only 16 percent of U.S. crop workers self-identified as belonging to an ethnic group that was not Hispanic or Latino.” In 2006, the U.S. Department of Agriculture estimated more than 1 million migrant laborers worked in U.S. agriculture.

In addition to being poor and often poorly educated, migrant workers move quickly from farm to farm, following the seasons and harvests as crops ripen. They’re not particularly vocal — continually worried about attracting the attention of immigration authorities — and don’t have the wherewithal to fight the system. Consequently, they’re easy to abuse.

Attempts to pass legislation that would give farmworkers collective bargaining rights and other protections have failed consistently on the national level. In 1975, however, the UFW was instrumental in passing the California Agricultural Labor Relations Act.

The state law guarantees collective bargaining rights to farmworkers but the UFW argues that while it looks good on paper, the legislation has no teeth. California, it says, has 35,000 farms, but less than 200 labor inspectors. The UFW stated in a recent press release that it would take more than 70 years for state inspectors to check every farm.

UFW’s Nicholson adds, “Even where there are laws, such as California, growers have been able to violate it openly with relative impunity.”

California Governor Jerry Brown, for instance, vetoed a bill last July that would have given farmworkers the right to elect union officials by secret ballot (avoiding retaliation by growers). In New York, legislation that echoed some protections of the National Labor Relations Act (e.g., 24 hours of continuous rest) failed in 2010 after strong opposition by the New York Farm Bureau, an agribusiness lobbying group.

After more than 70 years of being snubbed by state and federal labor officials, farmworker advocates now are appealing to consumers. They believe by steering shoppers toward fair labor growers — those with strong labor-rights policies — they can germinate a fair food system.

“People should know not only what they’re eating but they should know the conditions under which it was produced,” says Michael Sligh, a program director for Rural Advancement Foundation International-USA (RAFI), based in Pittsboro, N.C. “Did the worker get fair treatment? Are the employees of the supermarket being treated fairly?”

To that end, a dozen or more organizations — UFW, RAFI, the Domestic Fair Trade Association, Farmworker Justice and others — are pushing for adoption of a comprehensive fair labor label, “Food Justice Certified,” which the Agricultural Justice Project (AJP) has been developing for the past decade. The certification eventually will ensure fair treatment throughout the supply chain, from farmworkers and farmers to distributors and retailers. It’s unique in that farmworkers help set the standard and support it.

In order to display the label, producers and packagers must certify (through an apparently exhaustive inspection process) that they have not violated the human rights of workers willfully, don’t subject workers to specific toxins and more. Those who sign up for the label must allow unannounced inspections.

Organically Grown Company (OGC), PCC’s primary organic produce supplier, is the first Northwest distributor to begin implementing AJP’s standard on three Northwest farms. It hopes to bring all its farms into the program but OGC’s sustainability manager, Natalie Reitman-White, acknowledges it will take years. “In a way that’s a good thing,” she says. “It means the certification isn’t just a rubber stamp.”

OGC also is studying the potential launch of a project that would address the need for greater access to health care for Northwest farmworkers and farmers. It’s modeling its program after Salud, a program developed by the Northwest wine industry. Salud employs health care professionals to go to vineyards to administer vaccinations and provides farmworkers with vouchers to use in their communities for checkups and discounts on medical care.

“We’re just getting started but we’re partnering with retailers and consumers to figure out how a few cents from each purchase of our produce could go into a fund to provide health care for our farmworkers,” says Reitman-White.

PCC’s produce buyer, Joe Hardiman, has shown fair labor is an issue PCC cares about; he’s refused outright to carry fruit from an organic grower with a record of scandalous labor practices.

UFW’s Erik Nicholson agrees that consumers have the ultimate power and authority. Even though farmworkers can’t rely on the courts or legislation for protection, final judgment of what is fair resides with the buyer. “When we educate consumers, consumers are going to hold growers accountable.”

Joel Preston Smith is a writer and photographer. He lives in Portland, Oregon.

As a health care professional and periodontist, I deal with making recommendations every day regarding purchase and use of health care products. So I was very pleased when I noticed certain toxic ingredients aren't in bodycare products sold at PCC.

Is there a better antidote to winter doldrums than a juicy grapefruit or a sweet, tangy orange? Eat them now, while they're at the peak of their season, and be sure to try some of the more unusual citrus varieties (organic, of course!).