Organic Seed: A resource at risk?

This article was originally published in September 2011 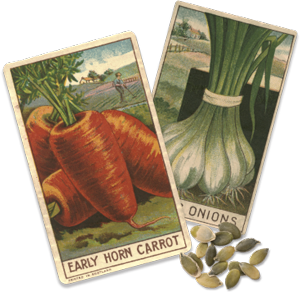 While we may not think about seed when eating breakfast or helping our children into their cotton pajamas at night, seed is the foundational step in feeding and clothing ourselves.

Seed is perhaps the most overlooked of the natural resources necessary for food and fiber production — the others being water, soil and energy. As a natural resource, seed must be stewarded and improved for our own use and benefit, and also for future generations.

Seed is a farmer’s first line of defense against pests, weeds and disease. Seed impacts — either positively or negatively — the nutrition and flavor of food, and the quality of all products derived from agricultural crops.

We can’t have healthy food systems without healthy seed systems. Yet most people who advocate for fair, local and healthy food and farming do not adequately understand the critical role played by seed and plant breeding.

Improving and protecting organic seed systems must be a priority. In particular we must revitalize public seed systems that once served our communities.

Our seed systems are at risk. Whereas we once had diversified regional seed systems, over the last 30 years a handful of agrichemical and pharmaceutical companies, such as DuPont, Monsanto, Bayer and Syngenta, have gained increasing control over our plant genetic (seed) resources.

They have used patents, lawsuits and well-funded lobbying to undermine regulatory systems, and to funnel our tax dollars to “public” research that benefits primarily their private interests.

Concentration in the seed industry has become so significant that just four companies control more than 50 percent of the global market. It prompted the Department of Justice in 2009 to launch an investigation into antitrust practices in the seed industry, including the use of patents as a tool in monopolization. (See PCC’s letter, Concentration and consolidation in the food industry.)

Consider getting involved with the nonprofits, companies and individuals working together to improve and protect organic seed.

Concentrated power by these agrichemical seed firms has created a fundamental shift in the millennia-old relationship between farmers and seed: farmers are losing their traditional roles and rights as seed savers, seed innovators and seed stewards.

The concentrated control of seed has undermined public seed education, research and plant breeding at public research institutions. Historically these institutions were created to diversify and improve the quality of food and farming, with emphasis on improving seed systems and supplying regional communities with diverse crop genetics.

Until 1980, we had vibrant seed systems that involved the collaboration and cooperation of public organizations. Our Land Grant universities worked with family-owned seed companies and local farmers in what can be called community seed systems, developed to meet a critical need for improved seed early in our nation’s history.

In the early 1800s, the young United States was desperate for seed adapted to the new territories and new climates where farmers were homesteading. The country simply did not have seed adapted to these regions, lacking sufficient crop genetic diversity from which to develop improved seed.

The federal government recognized that feeding an expanding continent required diversification and improvements in crop genetics. It made a series of commitments to support the development of public seed for public good.

In 1819 the Treasury Department directed Navy officers and ambassadors to collect seed and other plant materials from foreign destinations that could be propagated and distributed to farmers across the nation. In the 1830s the Patent and Trade Office began planting the country’s seed collection in experimental plots, increasing those that were useful to farmers around the country.

In 1862 the U.S. Department of Agriculture (USDA) was created and took over seed activities. That same year, Congress passed the Morrill Act, establishing “land grant” colleges in each state to support public plant breeders tasked with improving the quality of crops for regional needs.

For more than 100 years, our land grants supported public plant breeders, increasing yields, developing varieties with improved disease resistance, training the next generation of plant breeders, and introducing new crops that diversified farm economies and the diets of those served.

The USDA seed program grew to its peak of distribution in 1897, sending out more than a billion packets a year. By 1923, when seed industry lobbyists succeeded in ending the USDA seed distribution program, seed activities accounted for 10 percent of USDA’s annual budget.

Well into the middle of the 20th century, plant genetics were maintained as public “commons,” with innovations for shared public benefit. Congress refused to allow patents on seed, recognizing that food security required a diversity of seed — and seed innovators. There were adequate intellectual property rights to compensate private innovators, yet farmers and researchers were allowed to save seed and further improve crops.

The University and Small Business Patent Procedures Act of 1980 (aka the Bayh-Dole Act) was supposed to improve efficiency in the transfer of technology and applied research from public schools to the general public. It allowed universities to patent research that had been funded by public tax dollars, and then to lease or sell those patents to the private sector.

It was promoted as a way to cut federal funding for universities. The argument was that fewer public dollars would be needed if there was more private revenue.

Over the last 30 years, the law has resulted in universities narrowing their research focus to the most profitable research, which often means working with the largest and best-funded businesses. Land grant colleges today are working primarily to provide agrichemical-seed companies with breeding material for chemically driven agriculture.

The second event in 1980 that negatively impacted public seed systems was a U.S. Supreme Court decision, Diamond v. Chakrabarty. The high court allowed the Patent and Trade Office to issue a patent on a living organism — a genetically engineered bacteria Dr. Chakrabarty claimed would be useful in cleaning up oil spills (it wasn’t, and never was commercialized).

Diamond v. Chakrabarty was the first link in a chain of events that eventually allowed patenting not only genetically engineered life, but also natural plants, parts of plants, genetic traits, and plant properties — such as a crop’s ability to tolerate heat.

Many patents granted in plant breeding are so broad and the legalese so difficult, that breeders at universities and small seed companies choose not to engage in research to avoid the risk of patent lawsuits.

Smaller seed companies without the finances and legal resources to survive the patent wars quickly were targeted for buyouts by larger seed companies. Many sold their family seed names, genetics and client lists to emerging gene giants, such as Monsanto, which purchased dozens of independent seed companies in the 1990s, and continues to do so around the globe.

By allowing living organisms to be patented, Diamond v. Chakrabarty provided incentive for genetic engineering. The technique of recombining DNA from different species into a novel creation had existed since 1974, but it was not until patenting of life was allowed that genetic engineering entered the marketplace.

Patents encouraged agrichemical-seed firms to profiteer by controlling the seed and restricting researchers and farmers from saving seed. Companies also profit by engineering crops to tolerate (and require) high levels of the herbicides that they sell.

In addition to engineering pesticide-promoting crops, the breeding of the industrial seed systems has created crops that are more dependent on unsustainable, toxic inputs. For example, breeding plants that require petrochemical fertilizers, such as anhydrous ammonia, has altered the root systems of major field crops, diminishing their ability to scavenge and compete for nutrients in living soil.

Farmers who are not following the industrial production model, such as organic farmers and those who grow “marginal crops” (e.g., tomato producers in the northern United States), are not being served by regional agricultural research schools, not private companies. This often leaves organic farmers with conventionally bred seed that is not optimal for their systems — known to decrease organic yields.

We are at a critical moment. We must reinvigorate community seed systems to develop the seed we need for climate shifts already wrecking havoc on the farm.

Ideally, public researchers would lead the charge in breeding for a sustainable food future. Some of our public agricultural institutions have increased organic research, but there’s still a great need for redirecting research goals.

These are public institutions and we as the public deserve to be served by them. We also have a responsibility to oversee their management and direction. We need to communicate, assist and engage with our land grant universities and USDA to get organic its due in research dollars — to breed regional, organic seed that can feed communities around the world with fewer environmental and human health costs.

The dominant seed companies have more money, more lobbyists, and the attention of media and government. We have communities of farmers, gardeners, eaters, food companies and some retailers.

Our food future depends on our commitment to advocate for farmers’ rights as seed stewards, for public seed research, and to ensure future generations have the seed diversity needed.

Initiative 1130 for cage-free eggs in Washington state will not be on the November ballot after all.

Letters to the editor, September 2011

Farming and family values, GMOs in non-organic corn?, From Facebook, and more