Can farmed fish be organic?

This article was originally published in April 2011 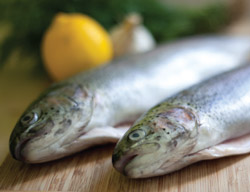 Consumers, producers, and anyone wishing to comment on aquaculture or any other topics pertinent to organic standards, may submit remarks either in writing or in person.

Submit comments at www.ams.usda.gov/nosbseattle until April 10, 2011.

Look for the line at the bottom of the page that says “Meetings: National Organic Standards Board” under the Title column, and “Notice” under the Document Type column. Then click the bubble to the right that says “Submit a comment.”

Farmed fish have been called many things — but organic isn’t one of them.

You may have seen “organic” salmon from Chile, Norway or other exporting countries in some markets or on restaurant menus. Such fish labeled “organic” reflect certification standards of foreign countries and may not meet the expectations of U.S. organic consumers.

The National Organic Standards Board (NOSB) Livestock Committee recommended in 2007 that the National Organic Program (NOP) “implement rule changes to allow for certification of aquatic species and to engage the industry and the organic community in dialogue in further development.”

What kind and how seafood may be farmed is yet undetermined. NOSB members have said that since farmed fish are here already, setting U.S. Department of Agriculture (USDA) standards will raise the bar on an industry with notoriously dirty practices.

As residents of Salmon Nation, we have experiences and information to share when the NOSB meets in Seattle April 25 to 29. Comments can be submitted before the meeting and presented in person. (See sidebar, page 4.)

PCC’s view is that it’s important for seafood bearing the organic label to be produced in ways that are compatible with organic principles — that is, adhering to practices that “restore, maintain and enhance ecological harmony … and balance natural systems.”

Ironically, the board’s recommendation for farmed salmon would allow up to 25 percent of the feed to be wild-caught fish. This violates the principle that organic animals must be raised on 100 percent organic feed.

One-third of the ocean’s harvest is herring, anchovies, mackerel and other small fish, which are made into fish meal and oil for fattening farmed fish and animals. The aquaculture industry already uses more than half the world’s fishmeal and more than 80 percent of the fish oil.

To add a pound of weight to caged Atlantic salmon requires 3 to 9 pounds of small fish. Cod, halibut, tuna and other high-value species being promoted for farming require even more protein in their diets. Some may need up to 15 to 20 pounds.

Much of industrial aquaculture is unsustainable because of the net loss of protein that results from intensive production farming of carnivorous species.

The NOSB could recommend that fishmeal and oil come from “sustainably managed fisheries,” but that would be taking essential nutrients from human populations. Plundering oceans to feed farmed animals and fish is more than an ecological problem; it’s also socially unsustainable for wealthy nations to exploit resources that people in developing nations need for survival.

“By draining our Southeast Pacific oceans of wild fish for feed … salmon farmers are … stealing fish out of the mouths of Latin Americans,” said Juan Carlos Cárdenas, a veterinary doctor and director of the environmental group Ecoceanos in Chile.

It’s a problem for consumers, too. Contaminants such as PCBs, dioxin and methyl mercury are concentrated in fish meal and oil and further concentrate in the flesh of farmed fish. A study by the Environmental Working Group showed farmed salmon often are the most PCB-contaminated protein source in the U.S. food supply, with an average of 16 times the PCBs as wild fish.

Problems with feed aren’t the only reasons to question whether farmed fish can meet expectations for organic. Ocean fish are migratory with strong instinctual drives: wild salmon journey thousands of miles before returning to the coastal streams of their birth. Confining these fish in cages violates another principle of organic standards — that animals must be able to exercise their “natural behaviors.”

Wenonah Hauter, Executive Director of Food & Water Watch (FWW) says, “What is supposed to set organic certification apart from other labeling programs is the rigor of the standards. Unfortunately, the proposed standard the board is considering is not rigorous enough to make consumers confident that the organic seal on farm-raised fish lives up to their expectations.”

Impacts are largely under the waterline and out of sight, so the industry has escaped scrutiny that would have closed down comparable dirty, land-based operations.

Like influenza and other diseases that can rapidly infect a classroom or office, viruses, bacteria and parasites amplify in crowded feedlots and spread easily. In an aquatic environment, this can be deadly to both farmed and wild marine life.

Neil Frazer, professor at the University of Hawaii, states that large-scale farming of finfish “eventually destroys surrounding wild fish stocks … nature has an effectively inexhaustible supply of diseases.” The salmon farming industry uses more antibiotics per pound than any other livestock producer and, along with voluminous amounts of waste, these pesticides, fungicides, algaecides and other chemicals flush from open cages into the surrounding waters.

Organic standards would prohibit such chemical treatments. But they’re not the only emissions causing concern.

Arthur H. Whiteley, professor emeritus, Department of Zoology, University of Washington, calculated that the salmon farms across from Seattle flush more than 5 million pounds of unfiltered fish waste each year directly into Puget Sound. He compared the cost to Seattle residents of building a sewage treatment plant ($573 million) and maintaining it ($80 million annually) to what the salmon farm industry pays for sewage treatment: zero.

Salmon farms in Washington and British Columbia have proven incapable of confining fish or controlling diseases and parasites. More than 613,000 non-native Atlantic salmon escaped into Washington waters in four years.

Viral hemorrhagic septicemia infected farmed salmon in our state and flesh-drilling sealice from B.C. salmon farms has been shown to increase mortality of juvenile wild salmon swimming past mesh-sided cages.

The standards proposed by the NOSB contain some provisions addressing impacts of fish farming but they’re considered by many to be woefully inadequate. Just as taller smokestacks on dirty factories do not solve problems of pollution in our atmosphere, relying on “dilution” in our oceans is not a solution for sewage disposal.

When certification for farmed fish came before the NOSB in 2008, Bea James was the only member to vote against it.

“I felt that the organic label for seafood should be determined on a case-by-case basis,” says James, “not include all species such as salmon and other carnivorous fish. The standard as written is too broad and all-encompassing. In organic agriculture, you can test the soil to make sure it’s organic but the ocean is completely fluid. How would there be any way of controlling and testing the open-net pens?”

Many agree that the NOSB’s 2008 recommendation fails to meet the high standards consumers expect from USDA organic food. Instead of rushing to approve production of confined fish and compromising the integrity of the organic label, a more studied approach would allow other options to be developed and tested.

One option is closed, land-based systems that keep fish from escaping, filter and re-circulate water, and collect waste for fertilizer. Closed-system farms can operate without antibiotics or other chemicals, resulting in a more natural product for consumers. Feed that’s organic, not genetically engineered, and not dependent on fishmeal also needs to be developed, even if it takes many years.

If USDA is bent on certifying farmed seafood, then trout, catfish and tilapia reared in closed systems are a good place to start. Their diets are plant-based so oceans would not be plundered of small fish for feed.

Unfortunately, sustainable fish farming has been overshadowed by plans to allow public waterways and beaches to be used for industrial production of geoduck clams, shrimp, salmon and other finfish.

A close look at industrial aquaculture shows how similar it is to factory farming on land. Some aquaculture “farms” are clean and sustainable, such as the closed-system Greene Prairie Aquafarm, which provides PCC with farmed shrimp.

But others can be just schemes to create profits for a few investors while causing harm to the natural capital that belongs to all of us — unpolluted, navigable waterways, free-swimming wild fish, and healthy coastal and tidal ecosystems.

Significant discussions with far-reaching impacts could be made at the Seattle NOSB meeting. The tide may be with us if enough people attend and help educate the NOSB and USDA about wild and farmed fish, and how important it is that any organic label live up to the consumer’s expectations.

Stay tuned to PCC and Food & Water Watch for ways to get involved.

Anne Mosness is a researcher/consultant on marine and fisheries issues and has fished commercially in Alaska. She’s also a Food and Society Fellow, and president of the Women’s Maritime Association.

For me, nothing is more exhilarating than the visceral sense of the earth’s awakening each spring. The thrill of that moment virtually (and sometimes literally) brings me to my knees.

Learn about the many pastas at PCC, including gluten-free pastas, cooking tips, pasta in bulk and a special PCC Cooks class. From cold pasta salads to steaming Mac and Cheese, our oodles of noodles — packaged or in bulk — are sure to inspire plenty of delicious meals.

Big Ag walks out on the sustainable standard process

The Sound Consumer first began reporting on a proposed process to define sustainable for labeling foods in 2008. The following report is an update on the controversy.