Big Ag walks out on the sustainable standard process

This article was originally published in April 2011 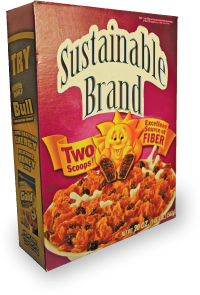 The Sound Consumer first began reporting on a proposed process to define sustainable for labeling foods in 2008. For background information, visit A sustainable agriculture label: coming to foods near you?, September 2008. The following report is an update on the controversy.

Last October, Big Ag threw in the towel after working two years with the Leonardo Academy to define for the nation what constitutes “sustainable agriculture.” The academy is a Wisconsin-based developer of formal industrial standards and has been herding ag reps, environmentalists and others of dissimilar minds since 2008 in an effort to pin down precisely what the term means, or should mean.

It’s more than a dictionary dustup. Producers relish the idea of being able to stamp the term “sustainable” onto every tin can and cardboard package that rolls off an assembly line in America. Such a label, should it eventually be adopted in some form by producers, would attract consumer dollars in a market polarized by two camps — those who have earned the term green, and those who merely want to pocket that color.

When Leonardo’s sustainable agriculture committee attempted to place limits on the use of industrial chemicals, genetically modified organisms (GMOs) and other laboratory-derived marvels, Big Ag cried foul to the U.S. Department of Agriculture (USDA), eventually walking out.

Ten members — including reps from the American Farm Bureau Federation, CropLife America, and the California Seed Association — submitted their resignation to Leonardo’s president, Michael Arny. They argued that a standard “cannot be developed without the fair representation and participation of those representing the overwhelming majority of U.S. agriculture, which constitutes 95 percent of production.”

Forty-six conventional ag organizations undersigned their Dear John letter. Betsy Peterson, who represented the California Seed Association on the committee, notes, “The standard [initially] was going to disallow not just the use of genetic technology, but all technology.”

Peterson says such a standard would have potentially maligned her agency’s product, which sometimes employs pesticides (including those allowed under the National Organic Standards). The committee eventually relented on some pesticide applications, she adds, but other problems ensued.

“For example, we had no one representing livestock on the committee,” she explains, “but we were discussing how to develop animal practices.”

Peterson says she tendered her resignation after fighting for a standard that wouldn’t make an outcast of conventional agriculture. She argues that the process had no clear leadership and was dominated by those who had no idea “how to produce food and fiber for a growing population …”

Jeff Moyer, farm manager for the Rodale Institute in Pennsylvania, says that the walkout is something of a moot point, given that USDA isn’t likely to require producers to meet a sustainable ag standard. The standard has been proposed as a voluntary set of principles, rather than a legal entanglement that potentially could banish “violators” from the marketplace.

Moyer, however, observes that, “If General Mills were to say that it would buy only from farms that are part of the sustainable standard, then that could drive the standard into [widespread] adoption.”

As a current member of Leonardo’s committee, Moyer says that while GMOs have been the most contentious issue, even defining what constitutes a “pasture” has been a legalistic quagmire. “If you talk to a lawyer, you’ll find out that you and he don’t think grass is the same thing.”

While General Mills (which undersigned the walkout) and others might lust after a “sustainable ag” label, it doesn’t appear that biotech and chemical companies will have a hand in defining it.

It could have been a point of pride for Mills, which might have imagined using a “sustainable agriculture” label to leaflet its Superfund site in Minneapolis, Minnesota, where (according to the Environmental Protection Agency) the industrial giant so un-sustainably dumped 1,000 gallons of “benzene, chloroform, toluene and xylenes … and other chemical wastes” while conducting “food research” in the City of Lakes from 1930 to 1977.

Moyer, former chair of the National Organic Standards Board, concludes, “If we’re trying to put the stamp of sustainability on the status quo of conventional agriculture — particularly large-scale farms — then I can’t support that. The majority of the committee was not supportive of that, and that’s why they [Big Ag] walked out.”

Notice of annual membership meeting, 2011 election this month, Meet the candidates, and more

Learn about the many pastas at PCC, including gluten-free pastas, cooking tips, pasta in bulk and a special PCC Cooks class. From cold pasta salads to steaming Mac and Cheese, our oodles of noodles — packaged or in bulk — are sure to inspire plenty of delicious meals.