This article was originally published in January 2011

The November 30 board meeting agenda included review and approval of the 2011 operating budget and business plan. The board development committee led discussion of plans for a February retreat. The finance and CEO evaluation committees also reported.

The member relations committee reviewed the fall member meeting. Members’ meeting evaluations showed that they found the program on fair trade informative and entertaining. The committee proposed April 26 as the date of the 2011 annual meeting, and approved “The Future of Organics” as the meeting topic. The board approved both.

April 26 through May 19 were approved as the dates for the board election. The 2011 ballot count meeting was set for May 23.

The next regularly scheduled board meeting will be January 25, 2011. Member comment period is at 7 p.m.

PCC Advocates is PCC’s email newsletter that keeps you informed about current food and agriculture controversies. From genetic modification to organic standards to food safety, we tell you our position on various topics and help you take action to ensure a healthy, sustainable future for food. To sign up, visit, PCC Advocates.

As events warrant, PCC comments on matters affecting food and agriculture. Here are some of our most recent actions:

This year’s nominating committee interviewed eight applicants for board candidacy. The committee is nominating the following PCC members for consideration in the 2011 election:

We’ll post candidate bios and photos on pccnaturalmarkets.com by March 23, including video interviews.

The nominating committee thanks all who submitted applications and encourages all members to check out the candidates on our website in March.

Talk to the Board

Visit with some trustees on January 12 at the West Seattle remodel celebration from 2 to 6 p.m. 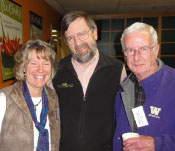 November marked 40 years of service to PCC by Randy Lee, who has held a number of positions throughout the years and has been the co-op’s CFO since 1998.

Like businesses everywhere, PCC has plans for the new year, with strategies for challenges and ideas for improvement — customer service, remodel and upgrade Fremont PCC, explore software to deliver our 10% coupon electronically — and much more!

We are what we eat and how we eat

Since returning from a Slow Food conference in Italy as a delegate, I’ve been noticing the American organic consumer’s tendency to focus somewhat obsessively on what we eat. It seems that our dietary rules — no gluten, sugar, dairy or nuts, for example ­— become the goal. Please, don’t get me wrong, I’m not denying the very real allergies and sensitivities that many of us have (me included).