Where are the salmon?

This article was originally published in March 2010 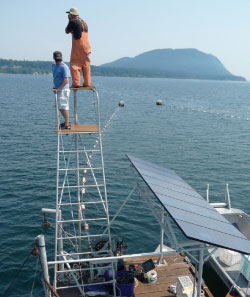 Buzz Hofford and Dave Hansen, of Lummi Island Wild, watch for salmon to swim through the reef below — and the opportunity to catch them in their solar-powered nets. The fish are on their way to the Fraser River after two years roaming the North Pacific and Bering Sea.

(March 2010) — I first encountered the mystery of the missing fish while floating on a raft anchored off the west coast of Lummi Island. It was a hot July day, sparkling with the heady anticipation of a record sockeye season.

Along with PCC Trustee Buzz Hofford, PCC seafood specialist Shaun McEwan (Greenlake PCC), and a handful of Northwest chefs, I boarded a little ferry to Legoe Bay to witness reefnet fishing, one of world’s most eco-friendly fishing practices.

Swaying on cedar planks atop the towers, fishers scan the swells, and when they spot salmon swimming through the plastic-ribbon reef — adrenaline rush! — they pull up the net, tumbling the shimmering beauties into an underwater pen in the raft’s center. From there, it’s into an ice tote for slush cooling, then flash freezing.

The July day we visited was a pre-season test catch to monitor salmon type and numbers. We caught enough fish to experience the thrill and understand the process but in the following days and weeks, sockeye numbers dwindled — so low, the Pacific Salmon Commission even closed test fishing and never opened the season. 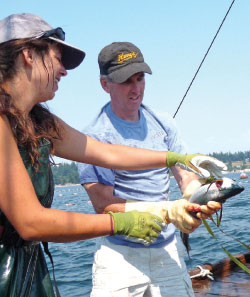 “It was disbelief,” says Riley Starks, innkeeper, restaurateur and reef-net fisher with Lummi Island Wild. “You go through the five stages of grief. We waited, thinking the biologists were wrong and the fish were just late, but it wasn’t that.”

Fraser River sockeye have a four-year life cycle, spending two years in fresh water before migrating out to sea and swimming north along the continental shelf to roam the Gulf of Alaska.

Lapointe says, “The last time we saw these fish was summer of 2007, so the crime scene is pretty old” and vast.

Canada’s Prime Minister Stephen Harper was so alarmed he ordered a Commission of Inquiry to investigate the 2009 failure of sockeye on the Fraser, historically the largest single salmon-producing river in the world. Interim findings are due in August 2010, and the final report, May 2011.

In the meantime, Simon Fraser University convened a think tank of scientists to mull the dismal sockeye return, the lowest in more than 50 years.

They recommended 1) a health analysis of Fraser River sockeye in all its life stages, 2) a study of farmed salmon along the migration route — to understand potential transmission of disease and parasites to wild salmon, and 3) a comparison of stocks and species to figure out which shared stressors hurt productivity.

An increasing number of environmentalists, scientists and First Nations people blame the clouds of sea lice incubated in fish farms lining the narrow waterways along the wild salmon migratory routes. They believe juvenile wild salmon weaken and die after swimming the gauntlet of fish farms and getting infected by sea lice from the floating feedlots.
The farmed fish industry says the sea lice are not its fault. It uses Slice™ (a pesticide that’s considered a neurotoxin and also affects shrimp, crabs, and copepods that are essential food for wild fish). Slice is used to kill infestations of sea lice that naturally are carried by some species of fish but may be thriving because of changes in the ocean’s temperature and salinity and are amplified in fish farms.

Yet, short term — even before the federal judicial inquiry is completed — the think tank scientists suggest experimentally removing farmed salmon from sockeye migration routes as a precaution.

Alexandra Morton, a longtime researcher and activist on the sea-lice issue, writes eloquently about the dark ripples caused by salmon collapse.

“Because salmon loom large in the diets of orcas, bears, eagles and other animals,” she writes, “their disappearance would unravel the region’s web of life.” Even the grand cedars and Doug fir nourished by rotted salmon carcasses suffer.

Paula Bock is a freelance writer in Seattle.

There is one distinct difference between nutrition and nourishment: you can buy foods with quality nutrition, but nourishment cannot be bought. Nourishment is based on three principles: balance, moderation and enjoyment.

Notes from the Cellar: In like a lion
(or a cranky old curmudgeon)

Janine VanSanden has been hosting house parties to raise money for PCC Farmland Trust since 2003. They’ve become so popular that friends call in advance asking when the next one is scheduled!