This article was originally published in March 2010 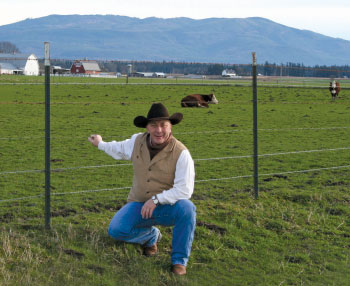 Washington businessman and rancher, Todd Kelsey, says consolidation and foreign imports are making it harder to know where food comes from.

Todd L. Kelsey is a self-described small-time rancher who runs 25 cross-bred Hereford and Black Angus cattle on a 20-acre ranch in Lynden, Wash. While his stake in ranching isn’t large, he stands to lose if the United States doesn’t fence Washington off from Canadian cattle.

Kelsey, a district director for Cattle Producers of Washington, says the state raised only 200,000 beef cattle last year, while importing 386,000 from Canada.

“In recent memory,” Kelsey says, “the state has lost 11 feedlots, numerous auction barns, and small mom-and-pop slaughterhouses. We’re seeing the same losses in the food sector that we’ve seen in other industries, as our businesses move offshore.”

According to the U.S. Department of Agriculture (USDA), imports of Canadian cattle fell from 1.6 million in 2002 to 135 in 2004 — after the first U.S. case of mad cow disease was found in an imported Canadian cow. By 2008 imports had climbed back to 1.5 million — despite a 2007 recall of 21.7 million pounds of Canadian-raised beef, following E. coli outbreaks and 48 illnesses in eight U.S. states.

Willard Wolf, a Washington rancher, beef-industry analyst, and former director of the USDA’s National Cattle Slaughter Estimate, notes that many if not most Canadian cattle typically are driven over the border straight to one of two slaughterhouses near Pasco or Yakima, one owned by meat-packing giant, Tyson Foods, the other by AgriBeef. So while ranchers are squeezed, it also means zero business for veterinary services, truckers and other industries that support Washington beef ranching.

“About the only thing they drop on the economy,” he argues, “is the manure they hose out of the truck before driving back across the border.” Wolf says the state should see less brown and more green. A calf raised in Washington, he claims, creates five to seven times as much revenue in the state and $335 for Olympia’s tax coffers, compared with a Canadian-raised calf.

Since they’re not here for the scenery and they’re not saving Washington ranchers, consumers might wonder what the import-incentive is. It lies where it usually does, Patty Lovera argues — in someone else’s pocket.

“The profit falls to the Cargills and the Tysons of the world, the large processors and distributors,” says Lovera, assistant director of Food & Water Watch, the Washington, D.C.-based watchdog.

Steve Appel, president of the Washington State Farm Bureau, saw it as far back as 2002, when he testified before a Senate committee, arguing that “the four largest beef packers account for 81 percent of all steers and heifers slaughtered today, compared with 36 percent in 1980.” (Today, they own 85 percent.)

Appel noted that packer ownership of cattle and other market structures, such as slaughterhouses, undermines market competition, drives down prices paid to ranchers, and drives small and medium-sized farmers and ranchers out of business.

According to the U.S. General Accounting Office (GAO), an industry is concentrated (losing its competitive character) when no more than four firms control 40 percent or more of market share. A June 2009 GAO report noted that concentration in the poultry industry, for instance, grew from 27 percent in 1982 to 57 percent in 2005. Concentration in the milk industry more than doubled during that period. Less than 2 percent of farms accounted for 50 percent of farm sales in 2007.

Concentration also is termed consolidation (or vertical or horizontal consolidation) and penetrating it makes nuclear physics look easy. For instance, when a firm sells seeds, fertilizers and pesticides to grow a crop, then buys the farmers’ crops and processes them in its own factories, and then sells the products to retailers, it controls the entire spectrum of food production — from seed to table — and it has great power to set prices for both farmers and consumers.

Today, 10 companies account for 65 percent of the world’s “proprietary” (subject to intellectual property protections) seeds for major crops. Since 1996, at least 200 independent seed companies have been swallowed up, mostly by Monsanto and DuPont.

Last August, the Organization for Competitive Markets asked state attorney generals to expand antitrust investigations into Monsanto’s practices, saying the lack of competition (due to Monsanto’s market power) drives up seed prices and harms farmers and rural communities, which benefit much more from locally owned businesses.

Consolidation has grown so insidious and pervasive, Lovera notes, even the monopolizers are crying foul. DuPont filed an 18-page list of allegations against Monsanto on Jan. 8, arguing that its principal competitor coerced seed dealers and farmers to secure unfair contracts, leveraging Monsanto’s control over much of the soy and corn market (now 92 and 80 percent GE, respectively).

The growing trend toward comprehensive ownership of food has worried not only industry watchdogs. The USDA, in conjunction with the U.S. Department of Justice, has scheduled five workshops in U.S. cities this summer to reassess the status of competition in agriculture.

Consolidation also is suspected in the decline of farmers’ and ranchers’ wages. The GAO says the proportion of the food dollar that goes to farmers fell from 30 percent in 1980 to less than 20 percent today. The 2009 GAO report stated that economic research did not support the conclusion that consolidation was shrinking farmer’s income but did note that “further increases in concentration may raise greater concerns in the future about the potential for market power and the manipulation of commodity or food prices.”

USDA researchers and colleagues have reported declines also in the number of farms — dairy farms in particular. USDA economist Erik O’Donoghue writes that the number of U.S. farms shrank 21 percent between 1974 and 2002.

“We think that consolidation is at the core of the food system problems that we have,” says Lovera. “We’ve done analysis that shows as consolidation intensifies, prices paid to farmers go down, but that doesn’t get passed down to consumers. Cargill and Tyson pay less and less for raw materials, but there’s no incentive to pass those savings on to consumers.”

“[The pressure to] get big or get out,” Lovera argues, “fuels a tremendous environmental impact. On the crop side, it means monoculture, less labor, more chemicals, more GMOs, more herbicides for weed management … On the meat and poultry side, it impacts how far we’re moving food around, which is an animal welfare issue.”

In 2003, when Tyson Foods pled guilty to 20 felony violations of the Clean Water Act, it was killing more than 1 million chickens a week at its Sedalia, Mo., poultry plant, according to the U.S. Department of Justice.

Even if broader ecological concerns are ignored, the question of food safety remains. Beef and produce recalls that span the continent challenge the assumption that bigger is more efficient — if one considers being “safe” part of being efficient.

Federal investigators in 2008 found, after nine deaths and as many as 22,500 people were sickened, that the Peanut Corporation of America knowingly shipped salmonella-contaminated peanut paste, meal, butter and other products across the country for more than nine months. The products — some of which contained rat feces, mold and roaches — were included in 2,100 products ultimately recalled by the Food and Drug Administration. One dominant provider supplied food manufacturers across the country and endangered consumers nationwide.

On Jan. 19, the FDA also recalled 864,000 pounds of beef products produced by Huntington Meat Products of Montebello, Calif., after E. coli was discovered by inspectors. Recalls of the products from Kroger (with stores in 31 states) and other foods from corporate conglomerates has prompted consumers to ask why unsafe foods are not discovered in the plants where they’re produced, rather than on supermarket shelves. One possible factor is that the FDA allows major processors to conduct their own independent food inspections — a situation that some argue encourages processors to skimp on safety reviews.

Being smaller doesn’t automatically make a food processor safer. Neal Hooker, a professor in food marketing at St. Joseph’s University in Philadelphia observes, “If a company has more to lose, it will work harder to not lose it. We’ve found evidence of some firms doing some bad things and that can be catastrophic … It’s not because they’re inherently unsafer; it’s because of the sheer reach of those firms.”

An IBM consumer-confidence survey in 2009 found that “less than 20 percent of consumers trust food companies to develop and sell food products that are safe and healthy for themselves and their families.” A 2009 American Society for Quality survey cited by Seattle food safety attorney, Bill Marler, says less than half (48 percent) of those surveyed trust the government’s ability to ensure the safety of food products. 73 percent said they’re “equally concerned about food safety as the war on terror.”

The Rural Advancement Foundation International, headquartered in North Carolina, petitioned Congress in 2003 to break corporate monopolies in agriculture. The National Sustainable Agriculture Information Service has weighed in on behalf of small farmers, in opposition to consolidation.

PCC also has submitted a letter to the USDA and the U.S. Department of Justice, which recently solicited public comments on the impact of concentration in agriculture. (Read it on our Web site.)

A U.S. Supreme Court decision on Jan. 21, however, overturned a legislative ban on corporate campaign financing. Government watchdogs allege that opening the floodgates to corporate dollars means that industry giants now have carte blanche to bankroll politicians who side with big ag and other corporate entities.

Where do consumers get to cast their vote? At the supermarket.

Joel Preston Smith is a writer and photographer based in Portland, Ore. He is the author of Night of a Thousand Stars and Other Portraits of Iraq (Nazraeli Press: 2006) and a Conversation Project Scholar for Oregon Humanities of America.

Talk to the Board, Notice of annual PCC membership meeting, 2010 election coming soon, and more

We hope you come visit our redesigned, reengineered and recharged Web site. Thanks to our virtual spring cleaning, it’s now easier to find delicious recipes, co-op events, food news and a wealth of helpful new features.